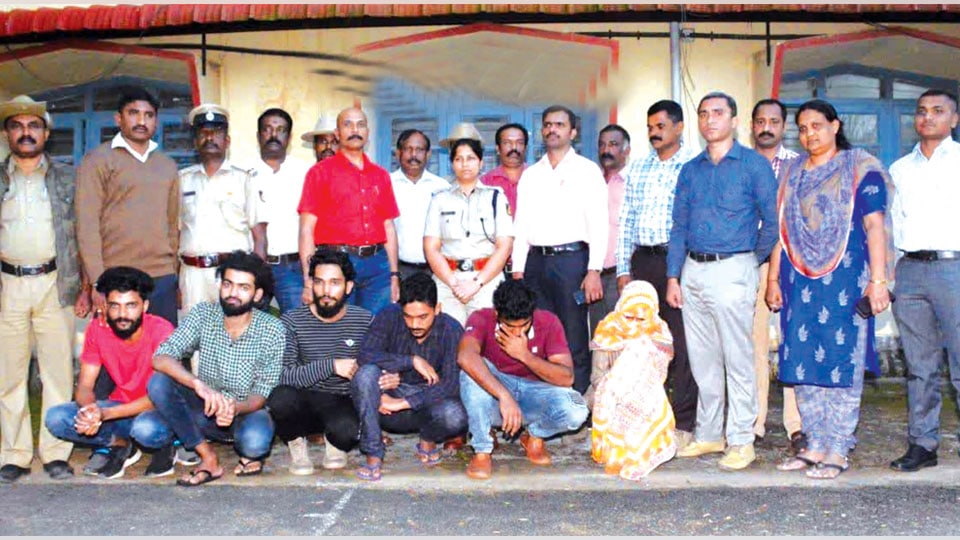 Madikeri: An accused in a honey trap case opened fire at the Police when they came to arrest him at Yemmemadu village near Napoklu in Kodagu. Fortunately, an Assistant Sub-Inspector (ASI) and four Constables escaped unhurt.

This was disclosed by Kodagu Superintendent of Police Dr. Suman D. Pennekar at a press conference held at her office yesterday. She said that Karim was the main accused in a honey trap case and after his associates were arrested, the District Crime Investigation Bureau (DCIB) team headed by ASI Hamid went to Karim’s house at Yemmemadu to arrest him.

Seeing the Police at his home compound, Karim opened fire with his gun. The bullet, however, did not hit the Policemen but instead it pierced the concrete wall surrounding the house. Suman said that Karim’s two wives were inside the house and while one instigated Karim to open fire at the Police, the other wife brought a gun from inside and handed over to him.

The Police team backed off as Karim had opened fire. Later Karim and his wives fled from the house. A case has been registered against the accused and his wives. The SP said that Karim, a repeat offender, had a couple of cases against him and during the disturbance during Tipu Jayanti in Madikeri, Karim had instigated violence.

Meanwhile, Karim’s associates who were honey-trapping victims have been arrested. Six persons including a girl student were in Karim’s group.

Mastermind Karim is, however, absconding. Muhammad Azaruddin (24), Aboobakar Siddique (33), Hussainar (27), Irshad Ali (27) and A.A. Samir (28) are the arrested. All are from Yemmemadu village of Madikeri. The girl student is from Bhuvanagiri, Koodige. She is a second year B.Com student at a Women’s College in Madikeri.

Gafur, who is a native of Emmemadu and a resident of Dubai, had come to his native village to construct a new house. Knowing about the same, Karim and Azaruddin took Gafur in a car on Aug. 16 on the pretext of purchasing electronic equipment from Mysuru. The girl student too accompanied them.

On the way, they took Gafur to a home stay near Ring Road in Mysuru. Gafur was intoxicated with drugs by the accused and later, the rest of the accused entered the home stay and thrashed Gafur. They snatched Rs. 60,000 cash and foreign currency from him. They later made Gafur pose with the girl student in a compromising position and recorded a video. They threatened Gafur that they will make the video viral if Gafur did not pay Rs. 50 lakh to them. After Gafur asked his relatives to get Rs. 3.80 lakh and paid them, he was released. Later, Gafur lodged a complaint in the Napoklu Police Station.