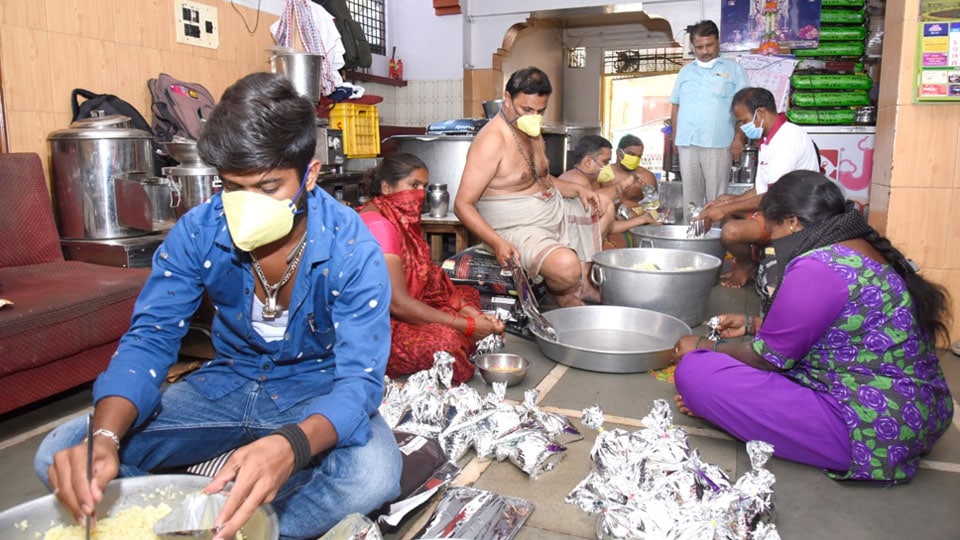 Hunger hero feeds poor and hungry in Mysuru amid lockdown

Mysore/Mysuru: Times of crisis, it is said, brings out the best in us. As we go through the world’s biggest lock down, every day people are turning into real life heroes. Heroes who are ensuring that thousands of poor, migrant labourers get food.

In Mysuru, H.V. Rajeev, a BJP leader, along with Mysuru City Corporation, is feeding over 6,000 hungry people every day. While many volunteers are distributing food only at regular intervals, Rajeev has been doing this task every day ever since the lockdown was imposed. And he has vowed to continue his social service till the lockdown ends.

His kind gesture has inspired many in his own party circles and has drawn the attention of the higher echelons of the party. Today, Mysuru District Minister S.T. Somashekar visited the kitchen where Rajeev’s team prepares food and was impressed by the service. Food is distributed in the afternoon and night to over 6,000 hungry souls every day.

A huge kitchen has been set up at Chamundipuram near Shankaranarayana Temple and the cooking is done by a team led by Srinivasa Rao, Kannan and Yaduraj. The cooks too are lending the service free of cost without charging a single rupee. Items like rice bath, vangi bath, chitranna, tomato bath, Pongal and fried rice are being prepared every day and distributed.

Following strict lockdown and hygiene norms, the kitchen is well maintained and clean. Efficient waste disposal mechanism too has been devised. Over 350 bags of rice, 300 kg onion, 40 tin cooking oil and loads of vegetables have been stockpiled.

The Mysuru City Corporation has opened rehabilitation centre for homeless people in various localities of Mysuru since Mar. 23 and food is being supplied by Rajeev and team. “We have been doing this service since the last 21 days and are feeding 6,000 people. If MCC requires, we are ready to cook for 3,000 more people,” said H.V. Rajeev.