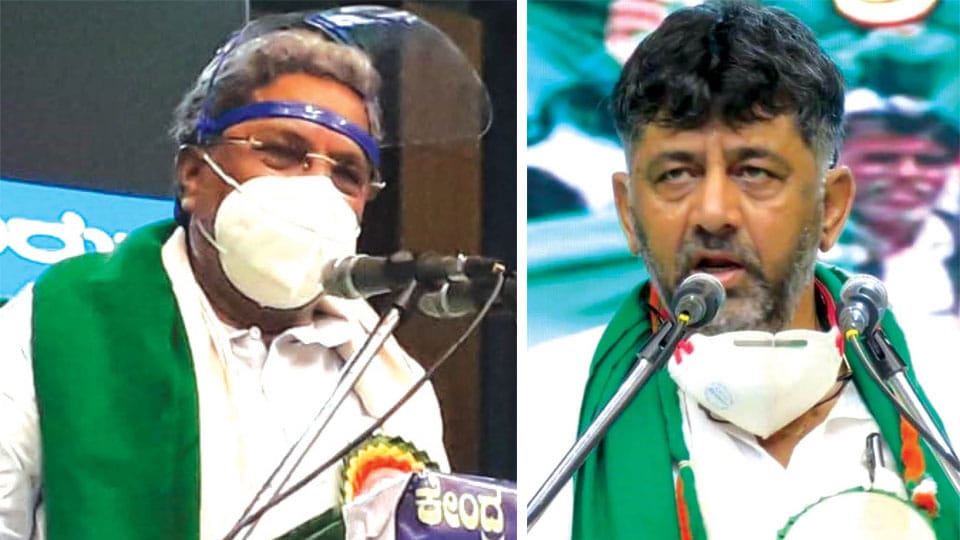 If voted to power, Congress will dump anti-farmer Bills: Siddharamaiah

He was addressing the gathering at ‘Raitha Dhwani,’ a State-level Convention of farmers organised by KPCC at Dr. B.R. Ambedkar Bhavan here yesterday.

Recalling his agricultural background, Siddharamaiah said that he functioned as the General Secretary of Mysuru District Raitha Sangha from 1980 to 83 and as such he very well knew of the plight of the farming community.

Accusing the BJP Government of launching an assault on farmers by introducing Farm Bills that are very much anti-farmer in nature, he alleged that the BJP Government is out to close down APMCs at a time when several others had emulated his (Siddharamaiah) action of introducing online trading in APMCs when he was the Chief Minister.

KPCC President D.K. Shivakumar, in his address, said that the farming community across the globe does not have any barriers in respect of religion, caste or colour.

Maintaining that it is the farmers who have kept the country’s culture alive, he said that the Convention is not limited to Congress party and is dedicated to the entire farming community.Lashing out at CM Yediyurappa, who took oath in the name of farmers, of failing to protect the interests of the farmers, Shivakumar wondered why the farming community should support the BJP Government which has not done anything for the benefit of farmers.

AICC  General Secretary in-charge of Karnataka Randeep Singh Surjewala, who also addressed the gathering, accused the BJP Government of launching an assault on farmers with the introduction of Farm Bills.

Warning that the Narendra Modi-led Government’s new Farm Bills would lead to the eventual collapse of  APMCs, he contended that the new Farm Bills will deny farmers the Minimum Support Price (MSP) and bring them under the control of a handful of capitalists.