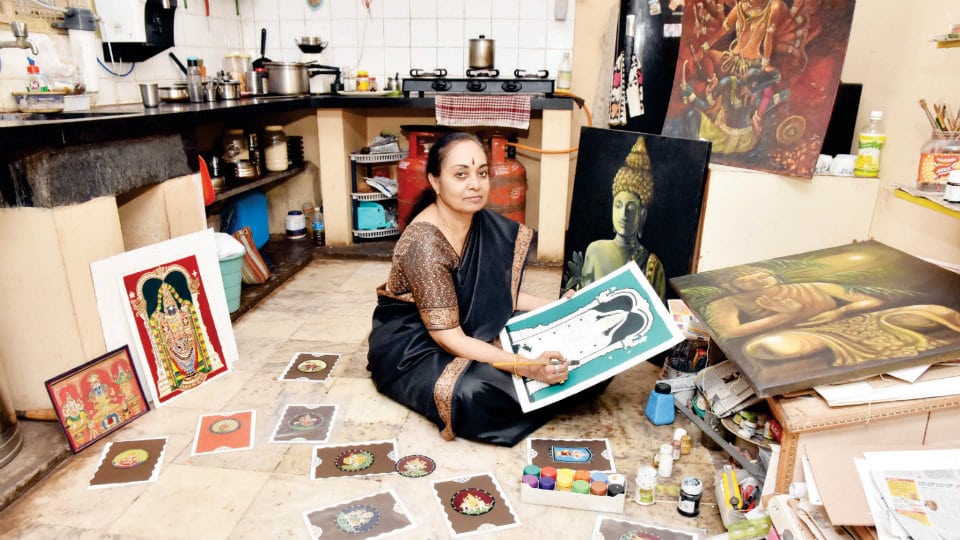 Illustrations from the Kitchen

Here is the story of a small girl who was amazed by the beautiful and inspiring Raja Ravi Varma’s paintings displayed at Mysore Palace. As she grows up and gets busy with life like everyone else, she never forgets her dream of becoming an artist. So much so that a small part of her kitchen becomes an art studio and she starts working on paintings there during her spare time. Now, she is an acclaimed artist preserving the rich tradition of Mysore style painting.

M. Girija’s flair for fine arts manifested in her early years which she has pursued throughout her life. She learnt Mysore style of traditional art from eminent artist late Subramanya Raju of Karnataka Chitrakala Parishat, Bengaluru. After a long stint of working in State Bank of India, she has now devoted most of her time to create artworks, in particular Ganjifa art and Mysore style art.

Her house is nestled in the busy lane of New Kantharaj Urs Road opposite JSS Law College in Kuvempunagar. The hustle and bustle of the busy road fades out as one steps into the living room which has been colourfully adorned with numerous artworks on all four sides. One that grabs attention the most is a stupendous work of art on the wall depicting three basic elements of nature (Pancha Bhuta) — water, air and fire with Lord Shiva, a principal deity of Hinduism. As we climb the stairs, standard size vintage paintings of Narasimha, Varaha and other Godheads welcome us to reach the Art Gallery on the first floor. This Art Gallery houses numerous Mysore traditional paintings, Ganjifa designs of different sizes and themes along with a large collection of antique artworks.

“When I was working, it was hard for me to find time for my favourite leisure activity. This is the reason why I set up all the necessary things like canvas, brushes and paint at the corner of my kitchen and started working in between my daily domestic chores,” says Girija.

A visiting faculty at the School of Design in University of Mysore, Girija has tutored many pupils in Mysore traditional painting and also has authored several articles in a number of magazines and books. Recipient of numerous awards including winner of prestigious ‘Karnataka State Award’ in Fine Arts by the Government of Karnataka in 2009 as well as Rotary Friendship Award in 2016, she has held about 32 solo and group exhibitions in India and abroad including UK, USA and Singapore and has painted about 2,000 standard size artworks till date. She has executed 12 x 8 feet colossal work of Goddess Chamundeshwari at CAVA. Her depiction of Goddess Sharadamba adorns Shankara Mutts of Mysuru, Hyderabad and Chennai.

Girija’s paintings have been housed permanently at the ‘Sacred Art Collection’ of Brussels, Belgium, as well as in ISKCON, Mathura. Numerous art connoisseurs in India and abroad have acquired her artworks. Her husband Kumar, a retired Deputy Director of CFTRI, greatly admires and supports Girija. Her daughter Ramya Kumar is also a budding artist.

The origins of Mysore paintings date back to the early days of the Wadiyars of Mysore. Krishnaraja Wadiyar III is credited with nurturing this style, helping it gain a unique place in art history.

Mysore paintings are mostly artworks representing mythological scenes and the royal family. Either they were executed as individual paintings or as murals for display on the walls of Palaces, mansions, temples and other religious places. The Mysore tradition is an offshoot of the Vijayanagar School of painting.

Though similar to Tanjore paintings in designs, Mysore paintings come with less decoration. Though they look simple, they are elegant and graceful with attention to details. With the fall of Vijayanagar Empire, artists from there migrated to places like Mysuru, Tanjore and Surapura, absorbed the local artistic traditions and customs, and developed new styles, the famous ones being the Mysore and Tanjore styles.

Ganjifa is an ancient card game, also known as ‘Kreeda Patra’ in Sanskrit and can be traced back to Mughal era. Ganjifa means money or treasure and the art form is executed with a super-fine brush using natural colours and gold on ivory board or sandalwood sheets.