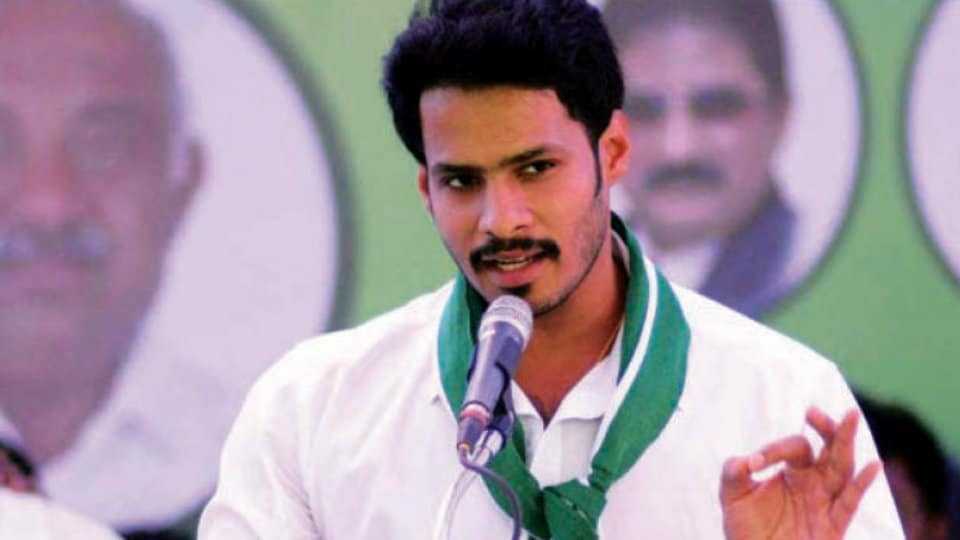 Is Nikhil inclined to contest Assembly polls from Mandya?

Bengaluru/ Mandya: Is Nikhil Kumaraswamy inclined to contest the next Assembly elections from Mandya? This question is doing the rounds in Mandya political circles and is being actively discussed at villages and street corners. And as if to give credence to such a question, Nikhil has asked JD(S) workers to prepare for Assembly elections which may take place any time.

In a fresh twist to the blow hot, blow cold relationship between the Congress and JD(S) in Karnataka, a video of Nikhil, Chief Minister H.D. Kumaraswamy’s son, requesting JD(S) party workers to prepare for elections has emerged and has been widely shared in social media. He even goes to the extent of saying that he will buy two acres of agricultural land in Mandya and settle there and work at grass-root level with party workers.

After suffering a humiliating defeat at the hands of independent Sumalatha Ambarish in Mandya Lok Sabha seat, Nikhil has taken the defeat in his stride and visited Mandya with the resolve to strengthen the JD(S) in the district. He has made up his mind to work at the ground level to win the hearts of people so that he can win the Assembly elections easily.

The 42-second video shows Nikhil interacting with the party workers. He says, “Be ready to face the interim polls any time.” The video clipping has been uploaded by Sunilgowda Dandiganahalli on his Face-book wall. But there is no information on where and when the video was recorded.

“We may have to go to polls at any given time,” Nikhil purportedly says in Kannada while interacting with party workers. “It may be a month, a year or two. We must be ready for any situation that is presented to us. We must begin to work on it now.”

In the video, Nikhil is heard assuring party workers that the coalition government will serve out a full term. “There is no doubt Kumaranna (Kumaraswamy) will complete his term as Chief Minister,” Nikhil says. “You get tensed over reports in the media (that the government will fall), but it is not like that. We know what is happening inside (the government). Do not lose hope after watching media speculations. Kumaraswamy will run (the government) for the next four years. But still, I want you all to be ready to face elections at any point of time.”

Nikhil has been visiting Mandya often after his Lok Sabha debacle and is responding to the problems of the people. “Very soon I will buy two acres of agricultural land in Mandya and stay here. I don’t need a house. Even a shed is fine for me. I will be amidst you,” he told party workers amidst loud cheer.

Nikhil’s words have set off speculations that if at all the Assembly elections are declared, he will contest from any of the eight Assembly Constituencies in Mandya. Sources said that Nikhil has already started ground work to contest. His entry to the fray in Lok Sabha polls was sudden and gave him less time to canvas and connect with the people.

Though the entire JD(S) machinery rallied behind him, Nikhil did not win the Lok Sabha elections. Sources said that Nikhil does not want the same to happen in the Assembly elections if at all it is inevitable due to uncertainty in the coalition government.

He wants to be amidst people and establish a relationship with them so that it can be a cake walk for him, sources said.