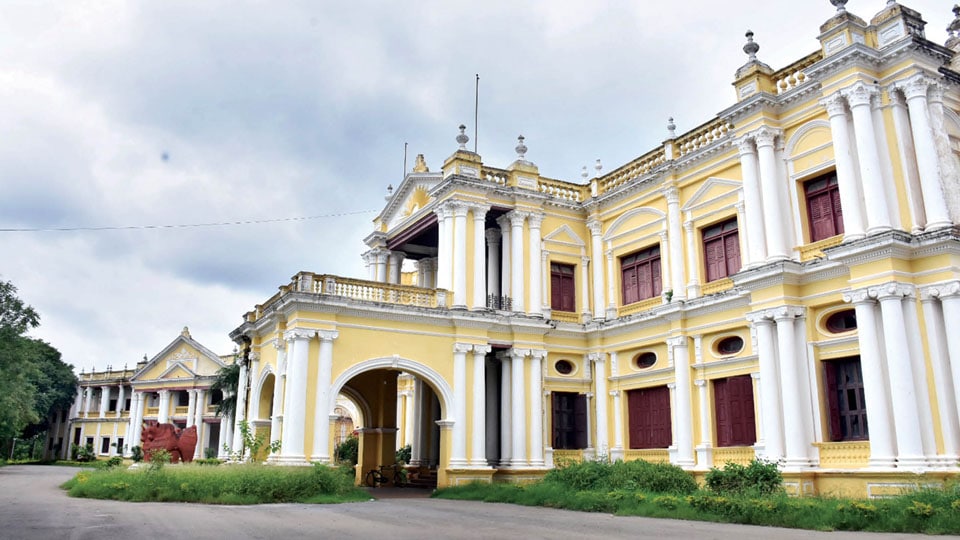 The 113-year-old Jayalakshmi Vilas Mansion, a heritage structure located in the sprawling Manasagangothri campus, housing some of the finest priceless artefacts, is lying in a state of neglect and disrepair even after philanthropist and Infosys Foundation Chairperson Sudha Murty spending Rs. 1.17 crore to renovate the majestic structure in 2001.

The mansion, now under University of Mysore (UoM) and converted into a Museum, is in the tourist itinerary and part of the heritage walk and cycle tours also. However, the building, which is built of brick, mortar, timber and iron without any stone being used, has become weak and developed cracks in many places.

The condition of the Mansion has drawn the attention of Heritage Expert Committee that has written a letter to Vice-Chancellor of Universality of Mysore Prof. G. Hemantha Kumar seeking immediate repairs and restoration of the building. The Government-appointed Committee has said that the way the heritage structure is maintained is a sad reflection on the state of affairs in the century-old University.

The mansion was constructed in 1905 by mother of Nalwadi Krishna Raja Wadiyar, for Princess Jayalakshammanni. The University of Mysore purchased Jayalakshmi Vilas Mansion in 1959 for Rs. 10 lakh when K.V. Puttappa (Kuvempu) was the Vice-Chancellor.

“Jayalakshmi Vilas Mansion is a majestic building with 123 rooms and over 360 ornamentally carved wooden windows and doors and is an accepted part of Mysuru’s heritage. Notably, on the ground floor is a Dancing Hall with stained glass dome, exquisitely decorated pillars, huge wooden decorations and specially crafted tiled flooring,” the Committee has stated.

Infosys Foundation Chairperson Sudha Murty had donated Rs.1.17 crore for the restoration of the Mansion in 2001. “Some restoration work was done and the mansion was converted into an Archaeology and Folklore Museum with more than 6,500 folklore artefacts and 3,000 antiquities, all informatively and well-arranged. But restoration work was not completed,” the Committee wrote.

The Heritage Expert Committee had on many occasions pointed out the presence of small trees and plants growing in the cracks and joints of the roof. “Removal of such growth on the roof is a matter of routine maintenance which had clearly not been carried out for years. The University officials have been informally reminded more than once regarding this matter,” the Committee stated.

“The University was advised that unless these were removed and the waterproofing restored, the roots would split open the roof, increase the rainwater seepage into the museum, and destroy the wooden roofing supports, leading to collapse of the roof itself. Evidence of rainwater seepage damage and collapse inside the building at several places was noted and photographed. The Dancing Hall is also in a dangerous structural condition,” the letter stated.

“The mansion is in a critically dilapidated condition and in imminent danger of collapse over of much of its area, with irretrievable loss of precious heritage building and the artefacts and antiquities within it. The investment of Rs.10 lakh in 1959 by Kuvempu and the generous donation by Sudha Murty is on the verge of total loss,” the Committee observed.

Mansion will be restored: VC

Reacting to the letter, UoM Vice-Chancellor Prof. G. Hemantha Kumar said that he has not yet received the letter. “I might get it anytime soon. But irrespective of the Committee writing or not writing a letter regarding the upkeep of Jayalakshmi Vilas Mansion, we are doing our best to restore the structure,” he said.

The VC said that they had already spoken to the Tourism Department about the restoration and attracting more funds. “Funds are not a problem as according to Tourism Department officials, they have dedicated funds. We will tie-up with the Department and the mansion will not be allowed to be neglected,” he added.