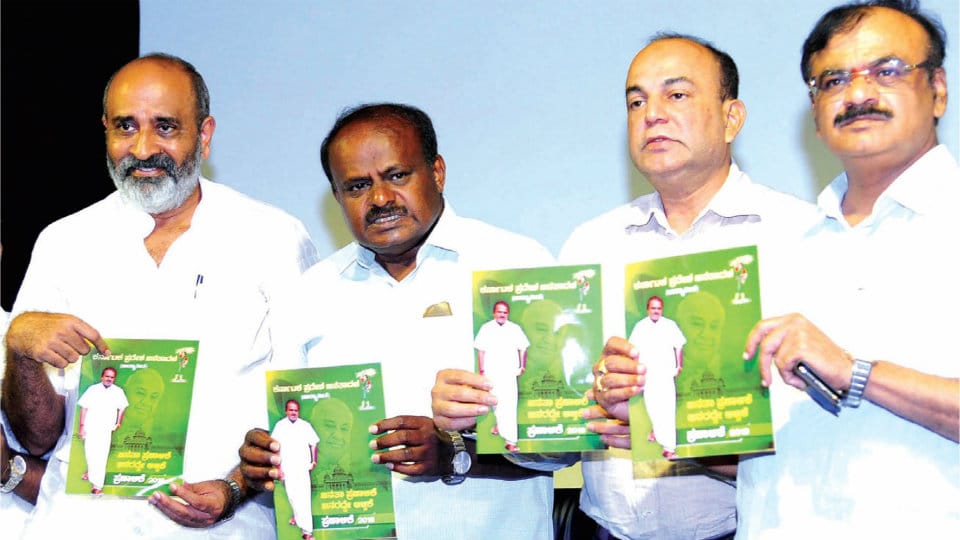 Bengaluru:  The JD(S), touted as a potential kingmaker in the Karnataka elections, released its manifesto yesterday. The party, headed by former Prime Minister H.D. Deve Gowda, has promised 100% loan waivers to farmers within 24 hours if elected to power. The loan waiver will include all agricultural loans including crop loans, horticulture loans, and medium-term loans availed by the farmers. Other than loan waivers, farmers will get free seeds and fertilisers.

In its 28-page people’s manifesto for development of 20 broadly divided sectors, JD(S) has promised a slew of measures to help the poor, including free power and 30 kg rice to BPL families. Among the other sops promised, the party said that pregnant women, differently-abled people, senior citizens and widows would be given pension.

A pregnant mother will be provided with an assistance of Rs.6,000 per month for three months before delivery and three months after delivery.

In furthering the cause of “women’s empowerment”, JD(S) in its manifesto said, “Women constitute 50% of voting population. But, their participation, very often is not even 50% in the elections to the Legislative Assembly. For every woman who contributes a vote in the Assembly election, JD(S) would like to provide a one-time award of ‘Democracy Support Incentive’ of Rs.2,000.”

Power generation, skill development, promoting Kannada and Housing Schemes also find mention in the JD(S) manifesto. The party stated that it will introduce “Spoken Kannada” and “Spoken English” in all Government Schools.

“We will revise our education system to accommodate the principles of ‘Naya Taleem’ (new skill) education system propounded by Mahatma Gandhi. Skill, hobby, talent identification from middle school level will begin and continues till graduation and will be recognised as part of merit,” JD(S) said.

Emphasising on skill development, the party said, “We will introduce skill development as a main stream of education from 8th grade onwards. All children study the same syllabus up to 7th grade. From 7th grade children can diversify to skill development schools or to formal schools. Both streams will ensure growth of the knowledge of the student.”

The party said there is a need to re-establish secular credentials in the State. “In the last 10 years, secular credentials have been weakened. One party is propagating Hindutva majoritarian theory without understating inclusiveness,” says the manifesto. Interestingly, the party has not named the BJP while speaking about the Hindutva narrative.

However, criticising the Congress for promoting Ahinda for vote bank politics, it has said the party has neglected all other communities. The Congress is also responsible for dividing Lingayats on religious tag issues and it looks like political killings in Bengaluru are common and Congress Government has failed to take any action.