Home » Columns » Abracadabra By K. B. Ganapathy » Journalism Then & Now 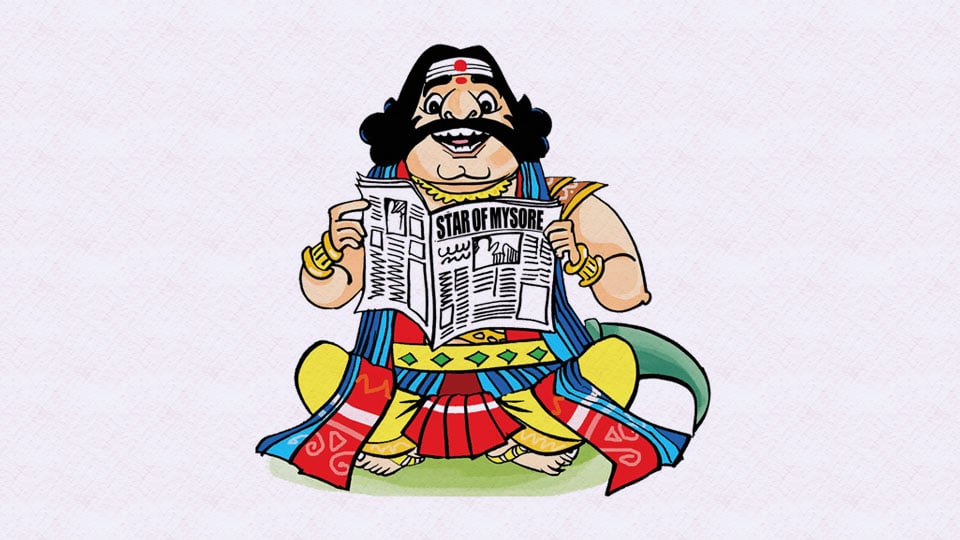 Print media, newspapers and magazines have undergone a sea change in their shape, size and contents since the day the first newspaper had appeared in the early 17th century. Now, all over the world we find print media in its new avatar keeping pace with the modern graphic and digital technology. Even the manner in which the language is written and the style of reporting have changed. Whoever had heard of ‘embedded journalist’ and ‘citizen journalist’? So much so, if you go to the archives and look at the old newspapers and magazines, you will be wondering at the gradual change that had taken place in the world of print media.

Just the other day, a gentleman, who has been freaking out on Star of Mysore and my column Abracadabra for the last 30 years, came to my office with The Hindu  newspaper of 28th January 2019 and asked me to read one item in the column ‘From The Hindu Archives.’ It was an obituary and the way it was written 100 years ago was too far removed from what we read these days. The obituary is about one Mr. Guptan Namboodiripad. Let me bodily lift the item and reproduce it here:

An esteemed and eminent Malayalee Brahmana gentleman has passed away by death, at Desamangalam, Shoranur, at the age of 67, of Mr. A.K.T.K.M. Guptan Namboodiripad, the Karnavan of his large illom since 1908, when he succeeded his illustrious predecessor, the late Mr. Narayanan Namboodiripad. The deceased was profoundly learned in Mathematics and Sanskrit and is known to have produced an excellent translation of the larger portion of the Bhagavat Gita. Early in life, he adopted Banking as a serious business and his Bank at Trichur was a well-known business institution in the Namboodiri world. He always took a deep and practised interest in the spread of English education among his own community and as one result, all the members of his own family have acquired a useful knowledge of English.

Mark the words ‘late’ and also ‘passed away by death.’ If I wrote this kind of obituary today, I would get a sack. But, for those days, this kind of writing and also providing of information about the dead person was acceptable.

Be that as it may, while we were still enjoying the obituary and the kind of information it contained, my friend suddenly, like out of the blue, mentioned about publishing in Star of Mysore only positive news on any one day of the year. Glad tidings. Only good news to the total exclusion of bad news. Omitting all the negative news completely for that one day. The negative news means news about violence, theft, cheating, corruption, accidents, etc.

READ ALSO  The Rotary Journey: To S. Korea and Japan - 4

Asked from where he got this quirky idea, he said he got it from the India Today magazine which has been bringing out one issue every year called ‘The Good News Issue’ since last four years. It is also called ‘Happiness Issue’ showcasing the power of the positive, whatever it means !

According to him these positive news stories, though published only one day in a year, is like a tonic. They benefit the readers mentally, physically and even emotionally. He mentioned that good news includes activities of people who organise Walkathons for good health, efforts to solve the man-animal conflicts, ways and means of ensuring that the benefits under government schemes reach the beneficiaries directly, special discoveries that would benefit the health of a person improving the quality of life, the achievers in the field of art, music, literature etc., etc.

According to him, reading such news items at least one day in a year would create positivity in the reader that he might say, “after all, there is so much of goodness in this world.”

Be that as it may, the mention of ‘good news’ brings to my mind how ‘no news’ becomes ‘good news’ in journalism as told by my Journalism Professor.

For now, the good news is that the Star of Mysore is celebrating its 42nd birthday today and it conducted a three-day Star of Mysore Education Fair in city as a prelude with over 80 educational institutions participating.

Surprisingly, we found some old institutions, I will call them ‘heritage’ institutions, who have enjoyed monopoly with no one to compete, except the ill-provided government schools, still continue to believe they are as good as they were in the past. One or two institutions did convey this message to us explaining why they would not participate in the Star of Mysore Education Fair. They forget the time tested dictum “If you have it, show it.”

Some of the modern schools have Swimming Pools, Astro-Turf Playing Grounds of International Standard, horse riding, specialised Smart Class Rooms, Robotics etc., making these ‘heritage’ schools an apology. However, they could have showcased their schools as being good and also economical for the lower middle class of the society. Let it be.

In an age of competition, it is innovation and modern infrastructure that will attract parents and students. The huge number of visitors seen trooping into Star of Mysore Education Fair is proof that parents as well as the students want only the best and not the second best when they can afford to pay.

The publishers of SOM thought they too had a responsibility to serve the community, acting as a catalyst, in promoting modern educational institutions by showcasing them under one roof for the convenience of parents and students. It was in that noble spirit and intention, SOM held the Education Fair as part of journalistic social responsibility. Happy to report that it was a resounding success.

Tailpiece: Before leaving office, the gentleman asked: ‘What is the secret of success for Star of Mysore?’

The answer was not far to seek. I told him the time-tested sutra: “Duchess is pregnant, O God! Who done it?”

In this sutra, you have royalty, sex, scandal, religion and suspense. If a newspaper has a mixture of all these stuff, people will buy. Here Duchess is unmarried royalty; being unmarried and getting pregnant is sex and scandal; the exclamation ‘O God’ is religion and, of course, the suspense is the question “Who has done it?”