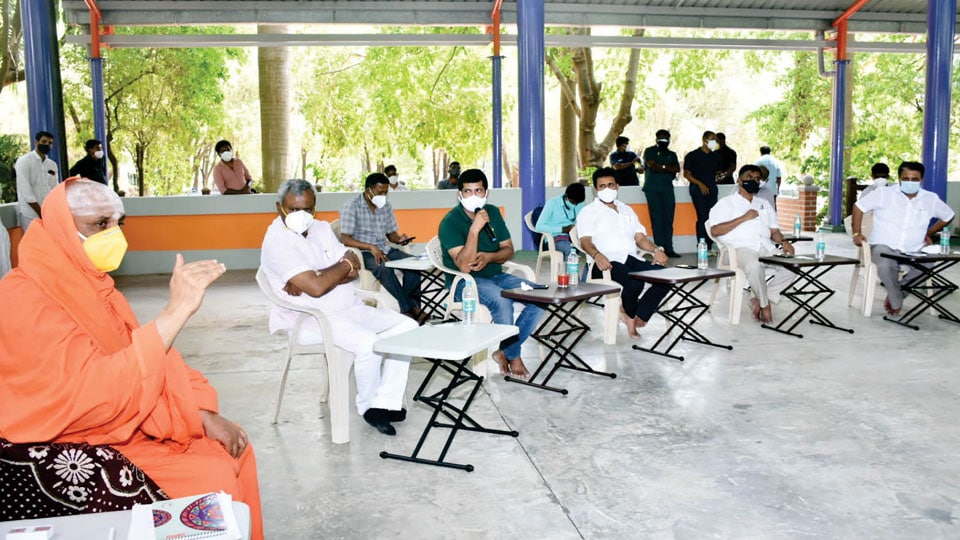 JSS Hospital to give 300 more beds to Govt.

Mysore/Mysuru: Continuing his efforts for  augmentation of Government beds in Private Hospitals, District Minister S.T. Somashekar visited Suttur Mutt at the foot of Chamundi Hill this morning and held discussions with Suttur Seer Sri Shivarathri Deshikendra Swamiji on allocation of more beds to the Government at JSS Hospital.

Later, speaking to press-persons, Somashekar said that the district administration had appealed JSS Hospital for letting out a total of 417 beds to the Government to tackle the deadly COVID pandemic, out of which 100 have already been given, with a considerable number of them being oxygenated beds. Maintaining that Swamiji has agreed to give 317 more beds, Somashekar lauded the efforts of the Hospital for treatment of COVID affected. Pointing out that the JSS Hospital is getting an oxygen plant from Gujarat shortly, the Minister said that the Government will extend all help in the setting up of Oxygen Plant at the earliest, for which Union Ministers from the state Pralhad Joshi and D. V. Sadananda Gowda will be appealed to follow up. Asserting that a good number of oxygenated beds will become available at JSS Hospital once the plant is set up, the Minister recalled the co-operation extended by the Seer and JSS Hospital when the pandemic first broke out last year.

Replying to a question on oxygen quota, Somashekar said the Government is working out the quota for each district which will be known very shortly.  All districts will get oxygen supplies based on this quota, he added.

Noting that Mysuru has five Oxygen re-filling plants, MP Pratap Simha said that he is continuously monitoring oxygen availability and delivery in the district on a regular basis. Maintaining that the district administration had collectively sought 2,000 beds from Private Hospitals, the MP said that however, Private Hospitals have given only about 700 beds so far. Expressing disappointment over the attitude of Private hospitals, Simha said that the Government is mulling appointing an administrative officer to all private hospitals in the district having more than 30 beds in order to get the desired number of beds for COVID treatment.

Stating that Mysuru district currently needs 20 KL of oxygen, he said that the district has got 18 KL, out of which 11 KL will be delivered to K.R. Hospital and the rest will be distributed among other Government and Private Hospitals  depending upon their requirement. Contending that most private Hospitals are demanding oxygen at the last hour, which has become a problem for the authorities, the MP asked private Hospitals to make an assessment of their oxygen requirements much earlier as this will help a lot in addressing oxygen issue. Asserting that the JSS Hospital has been following all SOPs in COVID treatment, Suttur Seer  said that the district administration has appealed for more beds and the JSS Hospital will give 317 beds with oxygen in phases once the plant is set up.