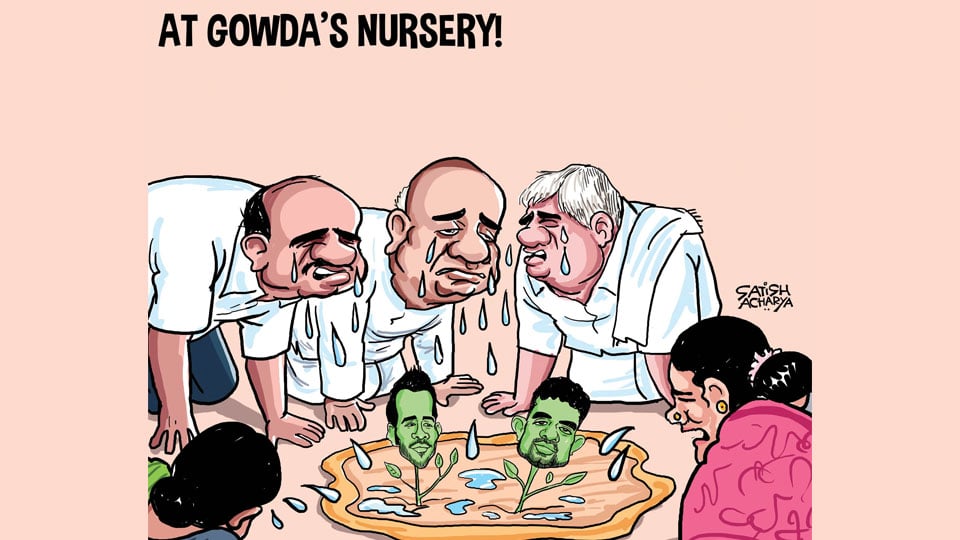 Temperature may be rising and Cauvery may be drying up but on Wednesday, Holenarasipura taluk in Hassan district saw heavy rains. Why? Because the first family of JD(S) let their lachrymal glands run wild.

Former Prime Minister H.D. Deve Gowda, while vacating his Hassan Lok Sabha seat to his grandson Prajwal Revanna, cried saying he was saddened by accusations that he was indulging in “dynastic politics.” How ironic !

Also, many may remember the other son of H.D. Deve Gowda, H.D. Kumaraswamy too recently cried saying his coalition partner Congress had turned him into ‘Vishakanta’. Now, all this crying in one family makes one wonder, can crying be genetic? Is there a ‘crying gene’?

Apparently so, according to ‘Psychology Today’, carriers of ADRA2b gene variation show more activity in a region of the brain responsible for regulating emotions.

But then there is another theory. Jonathan Rottenberg, Professor of Psychology at the University of South Florida, USA, says, “We learn early on that crying has this really powerful effect on other people.” And what is that power? He says, “Tears can neutralise anger.”

So is the first family of JD(S) neutralising the people’s growing anger against this party that has turned into a family affair? Is the family hoping to thaw the tempers of people who see JD(S) as an untrustworthy party which leaves its partners in the lurch and the State in limbo? Are they trying to endear themselves to their party workers

who are upset that young grand children who were never interested in politics have been given tickets ignoring party workers who have slogged to build the party for years? Are they crying so Vokkaligas don’t feel their vote has been taken for granted? So is this the ‘saline solution’ that will save their position in Karnataka politics? We shall know on May 23rd.

Now, while BJP called the JD(S) family’s emotional outburst as the “First Drama of 2019 Elections” and “Art of Crying”, they should remember that their own Yeddyurappa is prone to heavy saline discharge.

In 2010, when he was the Chief Minister, he cried, not at the sad state of our State but because he was forced to remove his Principal Secretary V.P. Baligar and Minister for Rural Development Shobha Karandlaje due to pressure from the Reddy Brothers.

While all these politicians cry, the people must ask how much have these leaders done for the people of their Constituencies for whom they shed tears? Has a politician’s Constituency’s net worth grown at the same rate as its MP’s or MLA’s? No.

All this crying reminds us of Columnist T.J.S. George’s article titled ‘Good men can only cry…’ where he has narrated how legendary jurist Nani Palkhivala cried on TV. He says, “Palkhivala was appearing in a TV feature and there was a rising tone of emotional disquiet as he replied to a specific question as to what sort of freedoms he would like to see curtailed. He cited the Kerala High Court judgement banning bandhs and said that such restrictions were essential. “Only in this country,” he said, “people think democracy is freedom to do what they like.” Sadness began contorting his face as he said, “Sometimes I wonder what sins I have committed in the past to be born in this country.” And then suddenly the floodgates burst open. Nani Palkhivala wept uncontrollably on TV.

Similarly, former Lokayukta Justice Santosh Hegde’s voice started to crack and soon, tears streamed down his face during the press meet about mining case. May be, Santosh Hedge too, like Nani Palkhivala, is wondering what sin he had committed in his past life to have been born in a nation that is so paradoxical.

In a nation with people of selective morality whose myopic caste-based voting habits elect leaders who ‘unselectively’ loot us, good men can only cry.

Now H.D. Deve Gowda may have given his grandson his seat but where will the septuagenarian go? Remember how Siddharamaiah gave up his ‘safe seat’ Varuna to his son and lost Chamundeshwari and barely scraped through in Badami, now leaving him powerless in Congress?

Let us hope the 86-year-old former PM’s saline solution works, after all, no one wants to end their splendid career with a loss, be it Politics or Sports.

For now, it will be interesting to see if the JD(S) First Family’s water works will help in the germination of the family saplings or will it wilt them and also the party when it comes to Lok Sabha elections. e-mail: [email protected]