Home » Columns » Abracadabra By K. B. Ganapathy » Kodagu, Playground of Karnataka: Is it under threat of disaster ? 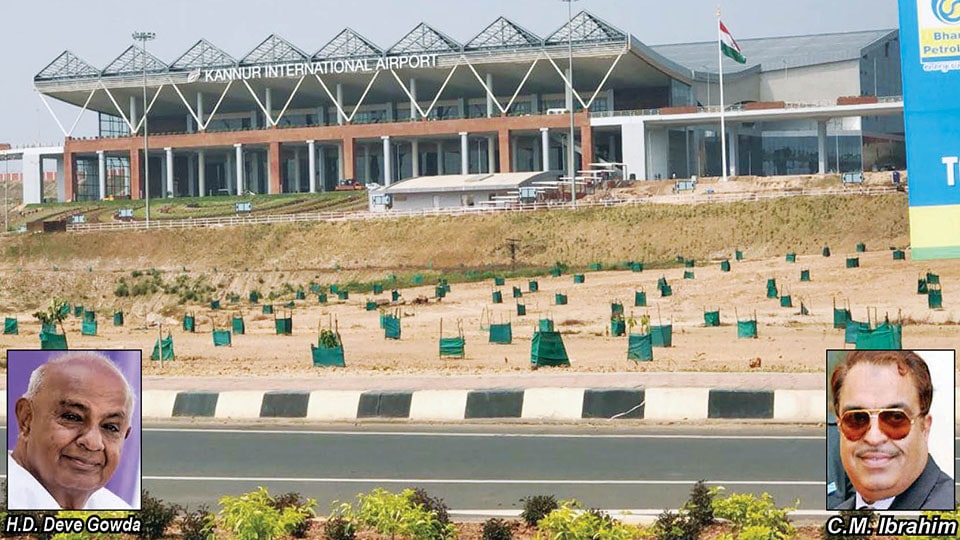 Kodagu, Playground of Karnataka: Is it under threat of disaster ?

In the light of the natural disaster that struck Kodagu district due to incessant and unprecedented heavy rainfall leading to flooding and massive landslips and deaths, you are made to think whether the disaster was God-made or man-made.

The religious ones may say it was God-made because of not following temple rituals as per the tradition, especially in Bhagamandala and Talacauvery following the questionable outcome of answers from what is known as ‘Ashtamangala Prashne’ (octagonal questioning ritual) held in May 2018. There is another school of thought that attributes the disaster to the irresponsible manner in which the greedy timber merchants and coffee planters deforested the mountains over the years.

Like Switzerland, Kodagu has rolling hills, deep valleys, but no large lakes or huge plains. But Kodagu is compensated for the absence of huge lakes with South India’s lifeline River Cauvery. It takes its birth in Kodagu in the womb of Western Ghats at Talacauvery in North Kodagu.

The Europeans, who visit Switzerland, also others from across the globe, get what is known as ‘Swiss Experience.’ Same could be said of visitors to Kodagu — they get ‘Kodagu Experience.’ Hence, if Switzerland could be the Playground of Europe, Kodagu could certainly be the Playground of Karnataka. In fact, it is already one — if we look at the number of tourists who crowd Madikeri and other parts of Kodagu in thousands from Friday to Sunday whether it is monsoon, summer or winter.

It is unfortunate, our politicians, law-makers and also bureaucrats don’t seem to be proud of such a Switzerland of Karnataka which Britishers during the days of the Raj called ‘Scotland of India.’

Sadly, today Kodagu has become vulnerable to disaster and destruction because of the so-called developmental works that are being undertaken and planned. Already, the high-tension power lines have been installed across Kodagu by cutting thousands of trees when there were other alternative ways available. Now, two major projects are being initiated. One is the Mysuru-Madikeri Railway Line and another four-lane Highway from Kerala-Kodagu border Makutta to Mysuru and another one from Mysuru to Madikeri leading to Mangaluru.

Fortunately, it was announced in the Parliament on Dec.19, 2018, by the Minister of State for Railways Rajen Gohain that the Union Government will not take up the Railway Line project between Mysuru and Madikeri via Kushalnagar. However, one must be careful about this announcement because, it was given up not for the reasons of environmental destruction, but for the reason that the project is not profitable right now. Which means, when the Government finds it profitable in the future, it would take up the project. However, the present abandoning of the project is indeed a big relief for the people of Kodagu.

Be that as it may, another danger for Kodagu, its forest and environment and also the demography is the contemplated four-lane Highway, cutting across Kodagu in the North and South.

Last week, I had been to Kerala and visited the Kannur International Airport (see picture above). That should give an idea about its size and the future growth. A couple of hills have been flattened for the purpose, creating a scene of wounded mountains with red earth all over. I am told it was the fourth International airport for India’s one of the smallest States, with a population of 3.69 crore (2017 census). 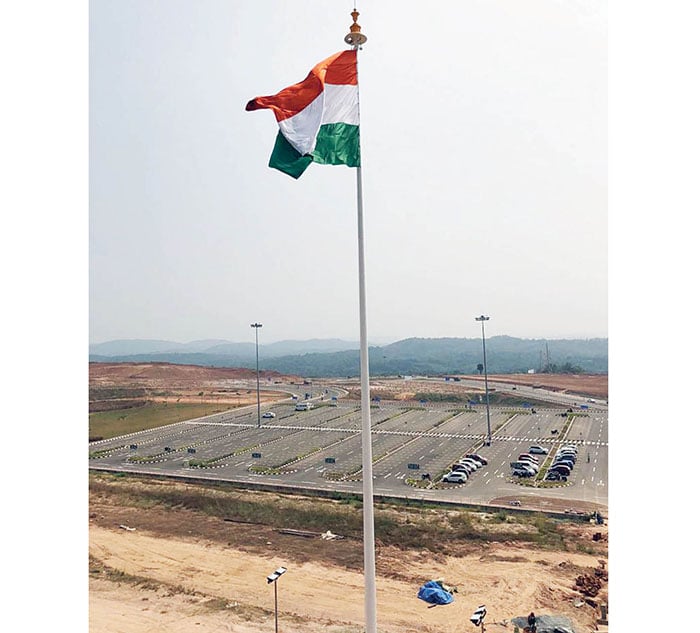 The National Flag fluttering at the entrance to Kannur Airport.

Ironically, the Kannur Airport was sanctioned when H.D. Deve Gowda was the Prime Minister between 1996-1997 and C.M. Ibrahim was the Civil Aviation Minister — both from Karnataka. Small wonder, why they never thought of upgrading the most important coastal airport of Mangaluru?

When I went to Kannur Airport, I saw the flex boards of H.D. Deve Gowda and C.M. Ibrahim at many points and towns along the roads, apparently, an expression of gratitude on the occasion of its inauguration on Dec.9, 2018.

One of the main infrastructures for an International Airport is a good road. Kerala is already working on a four-lane Highway which will terminate at Kodagu border Makutta. I saw the work briskly progressing, slicing off the hills with JCBs and earth mover machines. Now, Kerala is creating a lobby in Karnataka for continuing the Highway from Makutta to Mysuru via Kodagu and similarly inside Kodagu for which there is strong protest from environmentalists and NGOs in Kodagu, specially the Coorg Wildlife Society (CWS) led by Col. (retd.) C.P. Muthanna.

Unless the Karnataka Government puts its foot down and says no to this Highway, there is imminent danger to Kodagu. Apart from adverse ecological and environmental effect, there is a danger of increased immigration from Kerala to Kodagu leading to pressure on the agricultural lands, specially paddy fields and coffee plantations. With the abolition of Jamma Tenure (which restricted sale of land to non-Jamma Land holders), the sale of lands in fragments and also of large areas would increase leading to demographic imbalance with its many negative repercussions.

The pressure on land will be such, there will be more illegal occupation of government lands and, as a natural corollary, it will lead to deforestation and increase in crimes.

Let us not allow anyone to further vandalise our beautiful Playground of Karnataka, that is Kodagu.