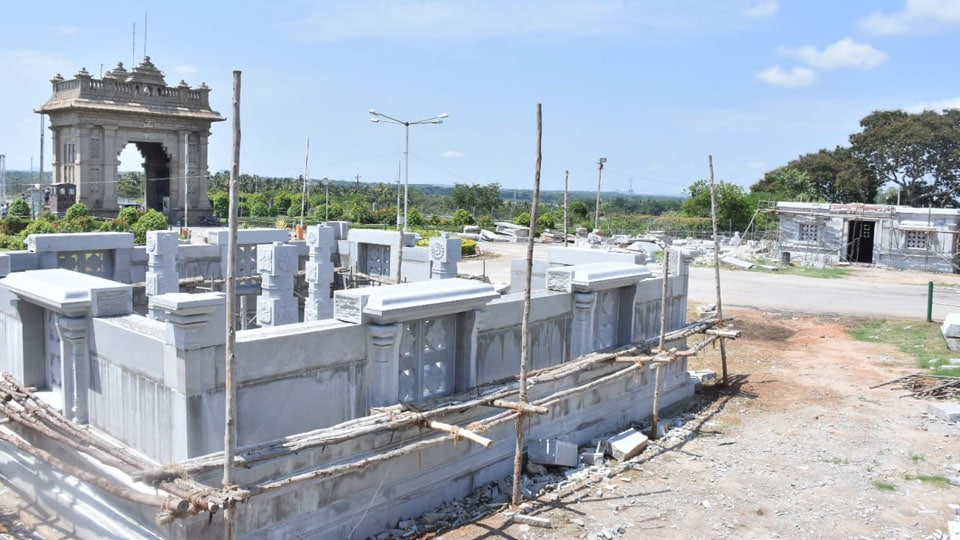 Mysore/Mysuru: The ongoing project of constructing life-size statues of Rajarishi Nalwadi Krishnaraja Wadiyar, the patron and the financier of Krishna Raja Sagar (KRS) Dam and Sir M. Visvesvaraya (Sir MV), Wadiyar’s Dewan and the Chief Engineer who built the Dam at the Southern Gate of the Reservoir, has ruffled the feathers of certain sections of the society who have questioned the logic of placing Nalwadi’s and Sir MV’s statues at the same level.

They have demanded that only Nalwadi’s statue should come up near the Southern Gate prominently while Sir MV’s statue can come up at a different place. They argue that though Sir MV’s contribution to the Dam is invaluable, it cannot be compared with the sacrifices and the vision of Nalwadi who is the single force behind the development of the erstwhile Mysore Kingdom, the fruits of his work of which are being realised and experienced by the present generation.

Voices against equally treating Nalwadi and Sir MV have been raised by a group led by Historian Prof. P.V. Nanjaraj Urs, who has been vocal whenever questions and clarifications about the history of Mysore is raised. Prof. Urs and like-minded individuals met at Jaladarshini Guest House in Mysuru on Monday and discussed about the statue project.

The State Government has approved the project worth Rs. 9.71 crore where the statues and domes (Mantapas) would be constructed using white marble stones. Both the statues will be of 22X22 metres length and width (22.387 metres X 22.387 metres). They will have a height of 9 feet and will stand on 2 feet pedestals and as per the project, both the statues will be treated equally and both will be accorded equal prominence. This particular point, however, is the bone of contention now.

“How can one treat Rajarishi Nalwadi Krishnaraja Wadiyar, the visionary Statesman and Sir M. Visvesvaraya, the Engineer-Extraordinaire, who planned and executed the Dam, equally? We are not opposed to Sir MV’s statue and we do not hate him. We have tremendous respect for his technical and engineering skills. But we are opposed to the equal treatment meted out to both,” Prof. Nanjaraj Urs reasoned.

Memorable for many generations

Justifying his stand, he said that the contributions of Nalwadi is memorable and beneficial for many generations and it was due to this, people of Mysuru still revere him. “When the idea of a reservoir germinated in his mind in 1911 for drinking water and irrigation requirements, the budget of Mysore Kingdom was Rs. 2.50 crore while Rs. 2 crore was needed to build the Dam. The Maharaja did not step back but stood firm in his decision and for the welfare of generations of people, his mother Maharani Vani Vilas Sannidhana took the precious gold and diamond jewellery from the royal vaults and handed them over to Nalwadi,” Prof. Urs said.

“The invaluable jewels of royal family were sold without a second thought. For Nalwadi and his mother, welfare of people was paramount. Sir Visvesvaraya was the engineer then and later he was promoted as the Dewan. While Nalwadi and Maharani Vani Vilas Sannidhana sold off the royal family jewellery, Sir MV was the person who executed the project. We cannot place both of them in same plane and cannot treat them equally, though Sir MV’s contributions cannot be negated or undervalued,” Prof. Nanjaraja Urs said.

The meeting decided to take the issue up to Chief Minister B.S. Yediyurappa and for that a separate meeting would be called on June 4, which coincides with Nalwadi’s birth anniversary.