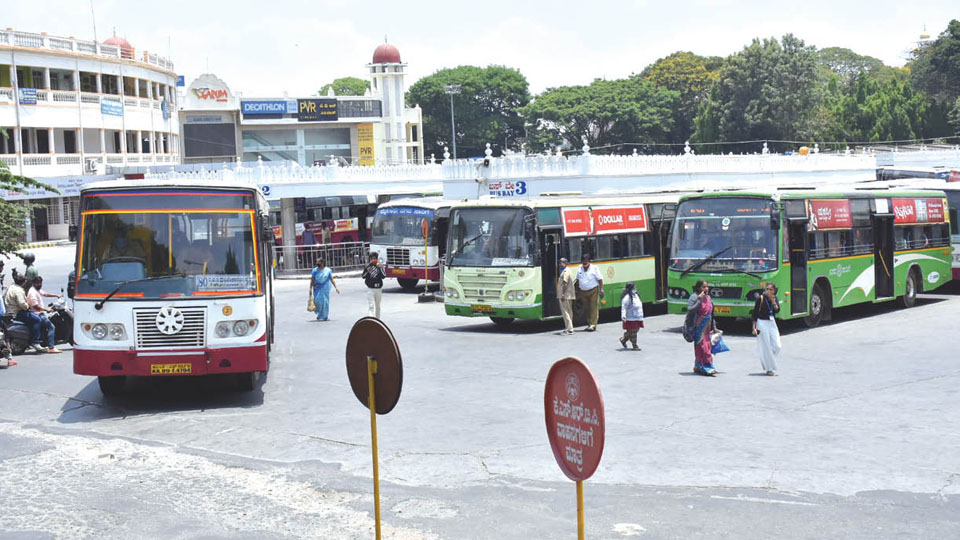 Mysore/Mysuru: The  indefinite strike launched on Apr. 7  by  employees of  State-run Road Transport Corporations — KSRTC, NWKRTC, NEKRTC and BMTC — seeking fulfilment of their nine-point charter of demands, which chiefly included salary as per the Sixth Pay Commission, entered the fifth day today, even as a few striking workers trickled back to work today in Mysuru.

With about 250 workers out of the over 3,000 staff including Mechanics and supporting workers  reporting for work today morning, the KSRTC Mysuru Rural Division operated 40 buses from the Sub-Urban Bus Stand, while the City Division operated nearly 100 buses on city routes from the City Bus Stand. The city bus operations may increase by afternoon as the authorities are expecting more number of staff to report for work. On the other hand, the Inter-State services operated by Transport Corporations of neighbouring States, have continued as usual.

Private buses, Mini buses, Maxi cabs and other Public Transport vehicles which have been permitted temporarily to operate on mofussil routes,  continued their services from the Sub-Urban Bus Stand, picking up passengers, as they have been doing since the launch of the strike on Apr. 7. Private operators have been carrying passengers to destinations such as Bengaluru, Tumakuru, Shivamogga, Mangaluru, Hassan, Madikeri, Chamarajanagar, Kollegal, Mandya, Malavalli etc., With today being a Sunday, there were less number of commuters at the Bus Stand. Meanwhile,some of the 98 trainee KSRTC staff of Mysuru Rural Division (Drivers, Conductors, Mechanics and Skilled Workers), who were served a final call notice asking them to report for duty on Apr. 9, reported for work today morning, while some more are expected to do so by evening.

Though there appears to be no resolution in sight for the ongoing strike, the KSRTC authorities in Mysuru are hopeful that there will be more improvement in operations from tomorrow.

Meanwhile, JD(S) MLC Marithibbegowda has appealed the striking transport workers to temporarily call off the stir as students, farmers and the working class are severely inconvenienced.

In a press statement, Marithibbegowda said that the Transport Corporations have contributed their mite for the growth of the State.

Pointing out that workers and other staff are behind the success of Transport system in the state, he said that though the demands of the transport employees are justifiable, the strike has paralysed the daily life of people, who are already reeling under the effects of COVID-19 pandemic.