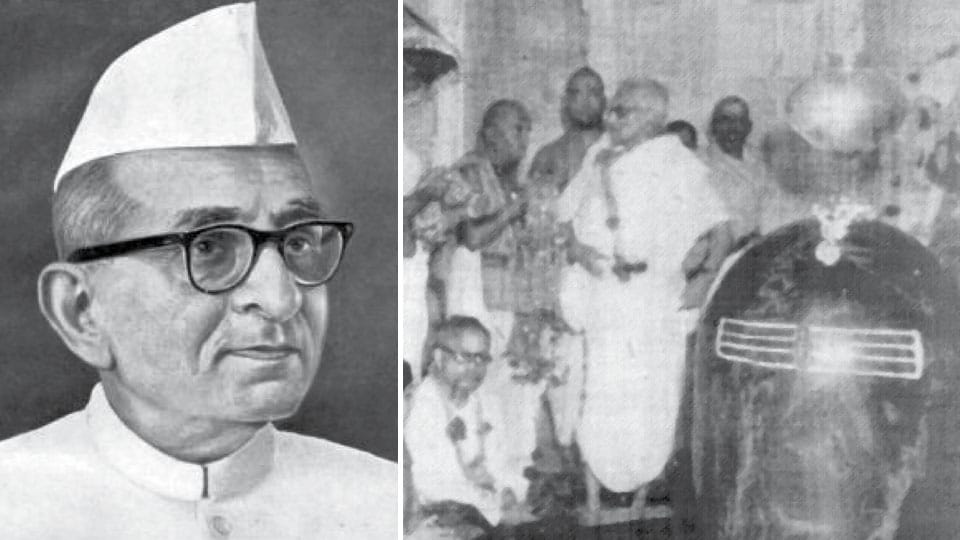 Munshiji was elected to the Constituent Assembly from Bombay on a Congress Party ticket and was a member of 16 Committees and Sub-Committees of the Assembly. Known for his legal acumen, Munshiji was invited to be part of the Committee which drafted the Constitution of India under the Chairmanship of Dr. B.R. Ambedkar. In the Drafting Committee, Munshiji articulated the principles of “Fundamental Rights” in Part III of the Constitution of India. The stellar contribution of Munshiji was towards the making of a strong Centre, even as the Federal structure of the Indian polity was maintained. As a student of history, Munshiji had realised that a weak Centre would only lead to dismemberment of the Union, an antithesis of his concept of a single and United India.

The political independence gained by India in 1947 was just a step towards picking up the path of ascent, a path India somehow had deviated from.

Munshiji was a person of eternal hope and confidence in the inner soul and strength of India as reflected in his own words: “The Egypt of the Pharaohs, the Greece of Pericles, the Iran of Darius and the Rome of Caesar are all dead; their life and culture are mere materials for scholarly research. But India had stood the shocks of time. Manu, Buddha, Panini, Bhasa and Kautilya are still living influences operating on life; Sri Krishna’s exhortation to Arjuna still inspires the thought, hope and conduct of millions.”

Towards the end of 1947, Kulapati Dr. K.M. Munshi championed the cause of reconstructing the famous Somnath temple along with Sardar Vallabhbhai Patel. After the demise of the latter, Munshiji single-handedly completed the reconstruction and / or renovation of the famous Somnath temple and invited Babu Rajendra Prasad, the then President of India, to its inauguration.  On this issue, Munshiji and Jawaharlal Nehru had a serious difference of opinion. While the former saw the reconstruction of the temple as a reversal of past injustice done to Hindus, the latter saw it as Hindu revivalism.

Munshiji was not an armchair social reformer. He practiced what he preached. He actively advocated the cause of women and their role in the society to build a robust India based on Indian values and culture.  After the demise of his first wife, Munshiji married in 1926 Lilavati Seth, a widow who was elder to him, resisting societal opposition and criticism.

Munshiji was one of the greatest writers in Gujarati. He wrote under the pen name of Ghanshyam Vyas. Krishnavatara, a seven-volume work, is one of the finest books on Sri Krishna. He also wrote books on the Somnath temple, Parashuram and Prithvi Vallabh, a historical novel, of the Malwa region. Prithvi Vallabh has been made into a movie twice, the last by Sohrab Modi in 1943.

His well-known historical novels in Gujarati are the trilogy  Patan-ni-Prabhuta (The Greatness of Patan), Gujarat-no-Nath (Ruler of Gujarat) and Rajadhiraj (The Emperor).  Munshiji has also written several works in English: some of them being Gujarati and its Literature; Bhagavad Gita and Modern Life; The end of an Era; Warnings of History: Trends in Modern India. In all, Munshiji authored nearly 126 books.

The Founding of the   Bharatiya Vidya Bhavan

Bharatiya Vidya Bhavan as conceived by Munshiji was founded in 1938, a good decade before India got political independence. He was then just 50 years old.

To Munshiji, Bharatiya Vidya was the fountain of eternal knowledge based upon universal and unflinching values and which absorbed into itself noble thoughts from all sources, irrespective of region, religion or race.

Bharatiya Vidya was based according to Munshiji on the inalienable principles of Satyam, Shivam and Sundaram — Truth, Goodness and Beauty — all of which are the basic features of every religion in the world.  Munshiji wanted to give a physical form to these metaphysical concepts and thus germinated the thought of an institution to promote, propagate and spread this universal education.  Thus, was born the “Bharatiya Vidya Bhavan.”

To reflect these evergreen and indestructible ideals of human existence, the motto of Bhavan is the statement from the Rig Veda “Ano Bhadrah Krutavo Yantu Viswatah — Let noble thoughts come to us from all sides.”

Recognised today, as an Institution of National Eminence by the Government of India, Bhavan occupies a pride of place as an apolitical Non-Governmental Organisation fighting against all religious differences, regional prejudices and social discriminations.

Stalwarts like C. Rajagopalachari and Sarvepalli Radhakrishnan were the Founding-Members of the Bhavan. Steeped in austere living style himself, Rajaji remarked of Munshiji as “verily a Raja Yogi and that royal living was almost his second nature.”

An eye-opening incident is recalled by Sri S. Ramakrishnan,  a longtime associate of Munshiji.  In 1962 just on the morning of the Silver Jubilee Celebrations of the Bhavan, Munshiji had donated all his properties to Bhavan. This was brought to the notice of Rajaji. Dr. Radhakrishnan was also present at the function. Rajaji then remarked, “Here is a worldly man living the ideal of ‘Tena tyaktena bhunjitah – enjoying in renunciation’” and Dr. Radhakrishnan said instantly “With all my philosophy, I certainly could not have steeled myself to do such a thing like this!”

To Sri Ramakrishnan, “Bhavan and Kulapati Munshi are synonymous. The Bhavan, his lengthened shadow, is the vibrant symbol of the continuing modern Indian renaissance which Raja Ram Mohan Roy pioneered in Bengal in the 19th century.”

Munshi envisioned that “India will once again be acknowledged as the Vishwa Guru — a superpower that embodies the ideals of Vasudaiva Kutumbakam — the global family.” This is the foundation on which he built his institution — The Bhavan.  In the words of the eminent jurist M.C. Chagla, “A silver thread of continuity ran through all his scintillating comments. And that thread was a passion for India’s greatness, be it in the past, present or future.  Munshiji built the Bharatiya Vidya Bhavan with the devotion of one engrossed in raising a temple. The Bharatiya Vidya Bhavan is a Somnath of learning.  For sixty-four years, people have sought it out from far and near in what has verily been a pilgrim’s progress…Of this Somnath, Kulapati Munshi was the sthapati (sculptor-architect) no less than the Kulapati.  He conceived of the Bhavan, raised it brick by brick, combining as he did so, both breadth of vision and a grasp of detail. Naturally, both the design and its execution turned out to be masterly.”

Notwithstanding ideological differences, Nehru on his visit to the Bhavan in Bombay in 1950 remarked “The Bhavan encompasses all aspects of life from the cradle to the grave and beyond — it fills a growing vacuum in modern life.”

Munshiji was quick to realise that a large part of the history and culture of India was documented by foreigners who played no role in the same.  So, under the aegis of Bhavan, he commissioned a magnum opus under the general editorship of Sri Ramesh Chandra Majumdar known as the “Dean of Indian Historians” and the result is the mega work titled “The History and Culture of the Indian People” in eleven volumes.

Munshiji was fond of recalling what Krishna said to Arjuna when the latter said to Krishna, “I am very weak, Govinda.”  Krishna said, “No. You are not. Strength will come to you only through a struggle with weakness.” Munshiji internalised this teaching of the Gita and fought through all weaknesses to become a standing monument himself — an institution.

As we cross the 83rd year of the advent of that mighty institution, it is time we re-dedicate ourselves to promote the cause of that Bharatiya Vidya keeping aside all petty ideological differences and steadfastly work towards making the dream of a one India, one nation a reality.

Just as Gandhiji was the Father of Indian Political Renaissance, so too Munshiji was the forerunner of the Indian Cultural Renaissance. To Munshiji political independence was just a step towards “Sampoorna Swaraj” for without liberating the cultural spirit of India which had been subjugated for centuries under the rule of diverse races, India was not truly independent.

Bharatiya Vidya Bhavan was his contribution towards such liberalisation. In the words of Sri R. Venkatraman, the former President of India: “In the Galaxy of eminent men of India, Kanhaiyalal Maneklal Munshi is a shining star that still beckons humanity to the path of duty and dharma.”