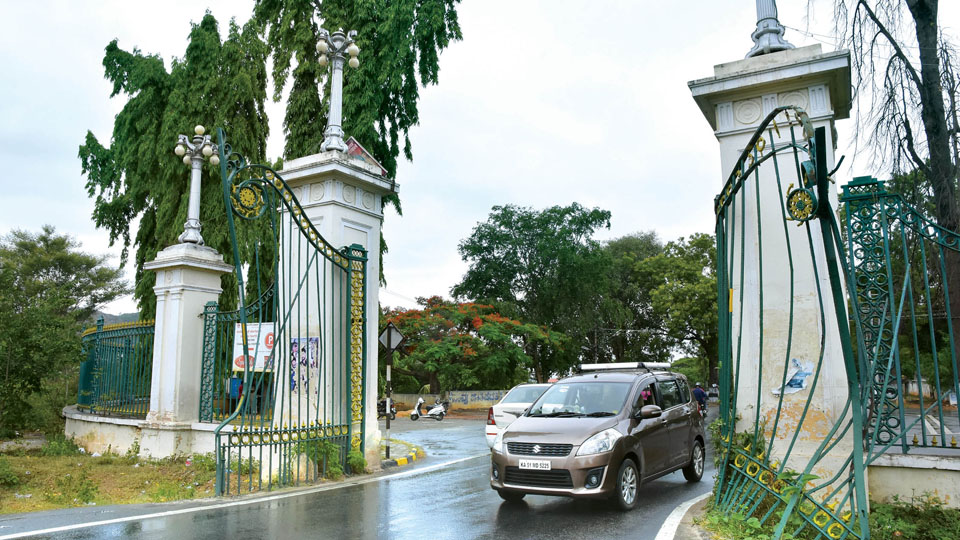 Mysuru: Most of the tourists coming to Mysuru visit the Lalitha Mahal Palace Hotel and spend time in photographing its magnificent interiors, staircases, chandeliers and a host of other icons from the past. Some of them shell out thousands of dollars to stay in the hotel to experience royalty etched in every bit and every nook and corner of the imposing structure.

It is one of the most gorgeous and splendid heritage buildings in Mysore, perhaps in Karnataka itself, next only to the Maharaja’s Palaces at Mysuru and Bengaluru. The magnificent building was completed in 1931 under the close guidance of Nalwadi Krishnaraja Wadiyar at a cost of about Rs. 13 lakh.

While the Lalitha Mahal Hotel is the cynosure of all eyes, the Arch Gates leading to the Palace is overlooked and sadly, the one near Thoogudeepa Srinivas Circle on T. Narasipur Road is in a shambles. Also being home to many heritage buildings and structures of historical value, Mysuru is known for its majestic arches, pillars and gateways. These architectural marvels, which are a treat to watch, are the gifts from Wadiyars, the erstwhile rulers of Mysuru.

Apart from the growth of weeds around the Arch Gate, there are deep holes in the area and one wrong move will land the commuter in the ditch and will lose a limb or two. Shockingly, the room where security guards were supposed to be seated to guide the visitors and guard the gate is occupied by a tea vendor and he has reserved the place to store his wares and equipment. Locals, however, appreciate the move of the tea vendor and they say that if the room is kept open, it will lead to illegal activities including prostitution.

The Arch Gate was built during the reign of Nalwadi Krishnaraja Wadiyar and is now being used to stick posters that announce PG accommodation, house for rent and work from home pamphlets and posters. The electric lamp posts erected on either side of the Arch Gate do not glow anymore and the other room near the gate is unlocked forever and people go behind it to urinate.

The Arch Gate that is supposed to be adorned with a flower garden is languishing in official and political neglect. The main gate of the Arch Gate has been damaged months ago and nothing has been done to restore it.

If this is the scene at the front portion of the gate, its sides tell another sordid tale. People including walkers and motorists stop by and rush behind to relieve themselves. The area is full of garbage and wild growth that has been left uncleared. The stench is unbearable and other commuters have to close their nose while traversing on this stretch.

There are deep ditches by the side of the road and a part of it is covered by dry wild growth. It is a dangerous spot in the night as well as in the day as motorists especially two-wheelers can easily fall if they are not on their guard. It is worse at nights as it is pitch dark in the entire stretch.