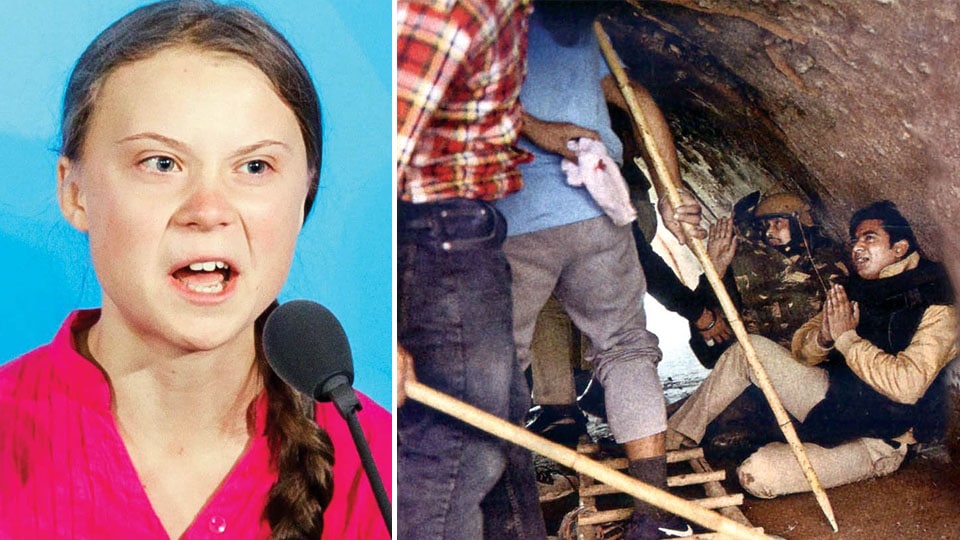 I had admired your courage, commitment, and capturing the global imagination on climate justice when you stood up at the 2018 UNCCC. As Chief Operating Officer of United Nations Sustainable Energy for All until 2015, I was deeply involved with global advocacy and building consensus for Sustainable Development Goal-7 and Paris Climate Agreement.  When I heard you in 2018 and 2019 my heart warmed up since we had been advocating that the youth would drive the change for a better future, and you emerged as a torch-bearer of that trust. However, I am writing to you with some disappointment that you have started using your well-earned bully pulpit to wade into political issues, such as farmers’ protest in India, which may not be as simple and as straightforward as you may have been led to believe.

I would like to apprise you of four key issues that you should carefully consider for an informed opinion on the subject.

1. Emissions from crop residue burning. Farmers demanded, and regrettably the Government of India agreed, to withdraw penalties for burning crop residue. Indian farmers, mostly around Delhi in the States of Punjab, Haryana, and Uttar Pradesh, burn about 100 million tons (Mt) a year of crop residue which generates 140 Mt of CO2, 12 Mt of other noxious gases and 1.2 Mt of particulate matter choking a population of about 50 million in the area. Crop residue burning also destroys the nitrogen and carbon potential of the soil, kills the microflora and fauna beneficial to the soil, removes the large portion of the organic matter, and unavoidably leads to increased use of chemical fertilizers. Smog in Delhi forces young children to skip school and stay indoors, 2.2 million children suffer irreversible lung damage. Your embassy in Delhi can inform you how they gasp for air during that period. Do you support farmers’ demand to let them continue to burn crop residue and add to emissions?

2. Food wastage. Every year in India, about 67 million tons of food is wasted, which has been estimated to be around US$14 billion and could feed 100 million people. Up to 40 per cent of the food produced in India is wasted, according to the United Nations Development Program, and about 21 million tons of wheat (2.5 Mt GHG) — equivalent to gross annual production of Australia — is wasted annually. FAO estimates show that two-third of food is wasted in post-harvest transportation, storage, processing and distribution before it reaches the consumer. If food wastage was a country, it would be the third largest emitter after the US and China. Embedded carbon in the wasted food in India is about 60 Mt of CO2 equivalent.  India desperately needs to modernize its agriculture, strengthen market linkages, and invest in the whole supply chain. This cannot, and should not, be done by the governments and should be left to a competitive, efficient and well-regulated private sector. Do you support India to continue with the current archaic systems and waste food that could feed 100 million hungry every year?

3. Water Crisis. A severe water crisis is looming large in India. About 85% of irrigated agriculture in India depends on groundwater. India extracts about 230 km3 of groundwater every year of which 90% is used for irrigation. World Bank estimates show that by 2030, 65% of Indian groundwater would be considered over-exploited, that is, extracting more than is recharged by nature. Fifty years ago, farmers in Punjab and Haryana valiantly rose to the challenge of food insecurity and started growing rice in a semi-arid agro-climatic zone to feed the country. It has come at a very heavy environmental cost of severe depletion of groundwater, deteriorating water quality, excessive use of chemical fertilizers and cancer-causing pesticides. India is now food surplus and needs to create incentives to make agriculture less resource intensive and demand driven. Agitating farmers want the government to lock into the current system of growing resource intensive and chemical ridden agriculture. Do you support that?

4. Corruption-controlled agriculture markets. You may not be aware but the current system forces farmers to sell their produce through government-established market yards where they have to pay a brokerage of about 2 to 3% and market tax of about 5 to 6%. Market Committees collect this tax supposedly for “rural development”, are controlled by politicians, and their accounts are not audited for years. The revenue is often swindled by corrupt politicians controlling these Committees. The new laws give a choice to the farmers to either continue to sell in the existing market yards or sell to anyone anywhere in the country and that too without paying any tax.

There are other strong vested interests benefitting from the status-quo. Government procures large quantities of wheat and rice for the public distribution system and pays a pre-announced minimum support price (MSP). Out of about 210 Mt of wheat and rice produced in the country, the Government procures about 85 Mt for sale to the poor at one-tenth of the procurement price. About 52% of this procurement is made from only three States Punjab, Haryana and Uttar Pradesh — the hub of agitating farmers. More than 90% of the farmers in rest of India do not benefit from this system. Normally, the market price is lower than the MSP. This is what creates a great opportunity for the broker-mafia. Brokers and politicians purchase wheat and rice from farmers in other States at a lower price (about 60% of MSP) and pay them in cash, bring it to government procurement stations in Punjab, Haryana and UP, sell it at a higher price (MSP) and get paid by cheque. This is counted as their agriculture income which is tax-exempt. So these brokers, often politicians or campaign financiers, not only earn the huge arbitrage but also convert the cash (generally crime money) to legitimate tax-free income. New laws would bring in transparency and make it difficult to legitimize crime money. No wonder farmer agitation is so well funded. I feel the innocent farmers may not even know the source of this questionable “philanthropic” funding.  I wonder if you would support a system of legitimizing crime and corruption money in the hands of corrupt politicians and their cronies.

Farmers in Punjab, Haryana, and part of Uttar Pradesh have a legitimate apprehension which needs to be addressed through dialogue and not intransigence of either party. India has adequate institutions of Parliament, Courts, Media, and public opinion to allow peaceful protests and open dialogue to solve its myriad problems of poverty and development. I am sure, eventually a satisfactory solution would be found not only for the agitating farmers of a few States but also for the remaining 90% farmers of India who would stand to gain from the new laws.

You are doing a great service to the cause of climate change, an existential threat to humanity that needs to be addressed urgently. We need global consensus for implementation of the Paris Agreement and Sustainable Development Goals. Walking into the thicket of local political issues, often mired in a battle with corrupt and vested political interests, would undermine your ability to keep the moral high ground to exhort World Leaders into action for a sustainable future. I would urge you not to expend your political and moral capital on controversial local political issues.

I am sending a copy of this letter to the United Nations Secretary-General H.E. António Guterres for his information.

I look forward to your continued advocacy of a sustainable future.

Editor’s Note: When Star of Mysore spoke to Mohinder Gulati about his letter, he stated that, while he was glad SOM would be publishing his letter, it would  be wonderful if his letter could be translated  into Kannada also.

As he put it, “I feel many important communications, such as the new agriculture laws,  are not translated into regional languages in order to communicate and explain issues which can be understood by a majority of Indians.” In keeping with his request, this letter will be translated and published in our widely read Kannada Daily Mysuru Mithra also.