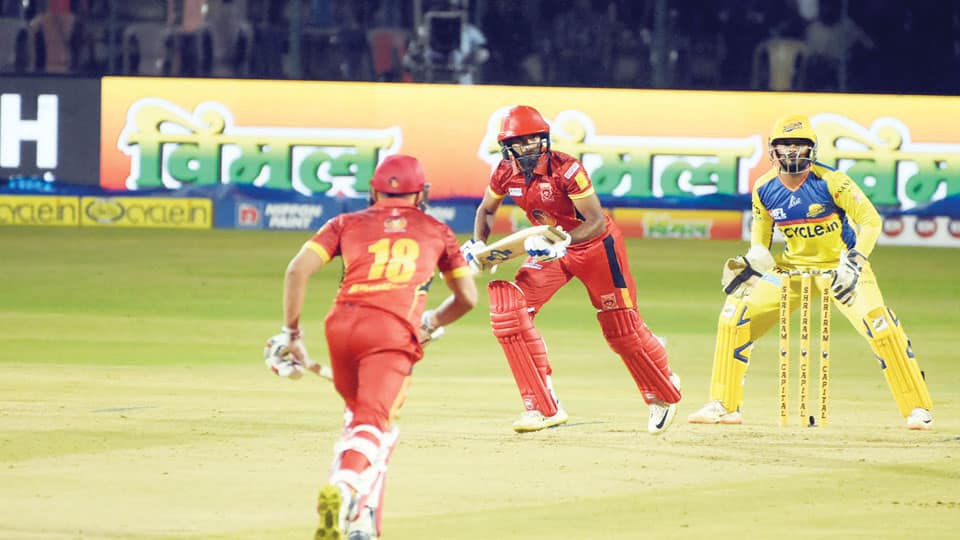 Asked to bat first, Mysore Warriors had a slow start, losing captain Karun Nair (5) and Naga Bharath (9), just before the end of the powerplay. Meanwhile, Nihal Ullal at the other end was making run-scoring look relatively easier in comparison.

Ullal and Pavan Deshpande were in the middle, with a task on their hand, which they set about doing on cue. The third wicket partnership produced 38 runs with Ullal (44) just missing out on a well-deserved half-century.

Deshpande and Shreyas Gopal could not kick on as the latter departed for 5 and the former was dismissed for 14. S. Shivraj (19*) and Shubhang Hegde (10*) put the long handle to good use, scoring some crucial runs before rain decided to pay an untimely visit.

The delay forced the umpires and officials to rework the playing conditions, and Mysore, who scored 112/5 in 16.3 overs, would have 114 runs to defend in 14 overs against Mangalore United.

In response, Mangalore too lost early wickets as Macneil Noronha (9) failed to cash in on conditions that seemed to have eased out. Captain R. Samarth though was taking confident strides towards the target, even though he saw Nikin Jose (9) make the long walk back to the hut in the 6th over.

With rain eyeing yet another visit, new man Abhinav Manohar and Samarth were looking to up the ante, driving the score to 53/2 in 7 overs. Rain stopped play on 7.5 overs with Mangalore’s score on 63/2, having edged ahead of the par score on the basis of VJD method.

A fine half-century by captain Mayank Agarwal and then a fruitful spell with the ball by Ronit More paved the way for the Bengaluru Blasters to begin their Maharaja Trophy campaign with a resounding win at SDNR Wadiyar Grounds. The Blasters handed Gulbarga Mystics an 54-run defeat, in what was the opening game for both.

Asked to bat first, the Bengaluru Blasters put on quite the show, with the captain Mayank Agarwal leading from the front. Mayank, who opened with L.R. Chethan (25) put on a solid 61-run stand before the first wicket fell in the final over the powerplay.

While the Blasters lost Chethan, it did not slow them down as Mayank and K.V. Aneesh continued to score quite freely, with the captain playing the more aggressive role in the partnership. Mayank went on to score a 25-ball-52, hitting 7 fours and 2 sixes in that time before being runout, a tad bit unluckily at the non-striker’s end.

Aneesh though held on at the other end, shepherding the innings well, even after the dismissal of the skipper. Suraj Ahuja added 17, Shivkumar Rakshith brought in 12 more runs before Jagadeesha Suchith was packed off for 6 runs. Kranthi Kumar added a quickfire 22, while Aneesh, who hit five boundaries, departed for 44 just before the end of the innings. The Blasters’ batters made significant contributions, helping pile on 189/8 in their innings. Vidhwath Kaverappa and Ritesh Bhatkal bagged a couple of wickets each while C.A.  Karthik and Pranav Bhatia picked one each for the Gulbarga Mystics.

In response, the Mystics had a horror start, losing Codanda Ajit Karthik (0) and then captain Manish Pandey (2) in the first over as Ronit More struck. The stylish Devdutt Paddikal and K.L. Shrijith had the task of rebuilding from there, and on cue they dropped anchor, hoping to absorb some pressure.

The duo put on a 34-run stand and were starting to pick up the pace when Padikkal had his woodwork disturbed for 18, just before the end of the powerplay. The pressure was well and truly on Gulbarga, and they needed quick runs, but Bangalore’s Mohith could only add 10 to the cause, before he and Shrijith (25) departed within five runs of each other midway through chase.

Kruthik Krishna (6) became More’s third wicket before Rishi Bopanna sent Ritesh Bhatkal packing for 10. Manoj Bhandage (35) counter punched in the final phases of the chase, finishing as the highest scorer on the chasing side, but the Blasters were too far out ahead. Abhilash Shetty (2) and Pranav Bhatia (10) were the last two wickets to fall as the Blasters won at a canter.