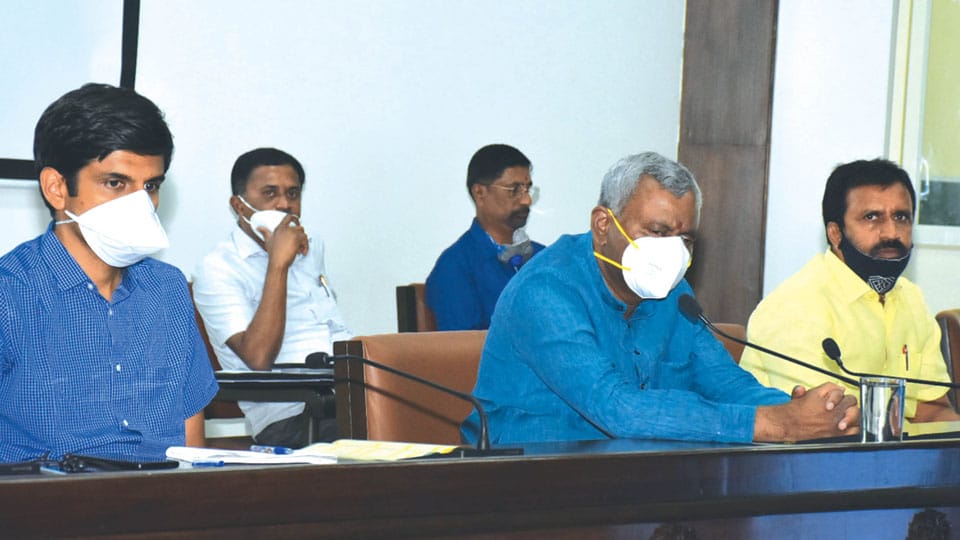 Mandya Minister to be invited to discuss water release from KRS: Somashekar

Mysore/Mysuru: Stating that Mandya District-in Charge Minister K.C. Narayanagowda will be invited for the meeting to be held next week in the city regarding release of water from KRS (the reservoir is located in Srirangapatna taluk of Mandya district) and Kabini Dam for release of water in canals for irrigation purpose, Mysuru District In-charge Minister S.T. Somashekar said he was happy that  reservoirs in the region have been fast filling up due to copious rainfall in catchment areas.

He was presiding over a meeting at the ZP Hall here this morning to review the readiness of the district for farming activities during the monsoon season.

Directing the officials to extend all possible help to the farming community, Somashekar said that the district has sufficient stock of sowing seeds and fertilisers and there is no cause for worry on this front.

DC Abhiram G. Sankar said that the District Administration has taken all measures to see that there is enough stock of sowing seeds and fertilisers at any point of time so as to meet the demands of the farmers.

Noting that most reservoirs in the district are filling up faster as compared to last year at this point of time, he said that KRS dam has already crossed 100ft. mark, thanks to copious rainfall in catchment areas.

Stating that farm activities have begun in full swing in irrigated areas across the district, he appealed the Minister to take up the issue of releasing water from KRS and Kabini dams with the Government.

Minister Somashekar reiterated that he would convene a meeting in the city next week for which Mandya District Minister K.C. Narayanagowda too will be invited for discussing the issue.

Abhiram Sankar also brought to the notice of the Minister that the Government is yet to release relief money in respect of 14 farmers’ suicide in the district, to which Somashekar said that he would immediately take up the issue with the concerned authorities.

Joint Director of Agriculture Dr. Mahanteshappa apprised the Minister with supporting statistical details, on the measures that the Department has taken for the benefit of farmers during the monsoon.

ONE COMMENT ON THIS POST To “Mandya Minister to be invited to discuss water release from KRS: Somashekar”