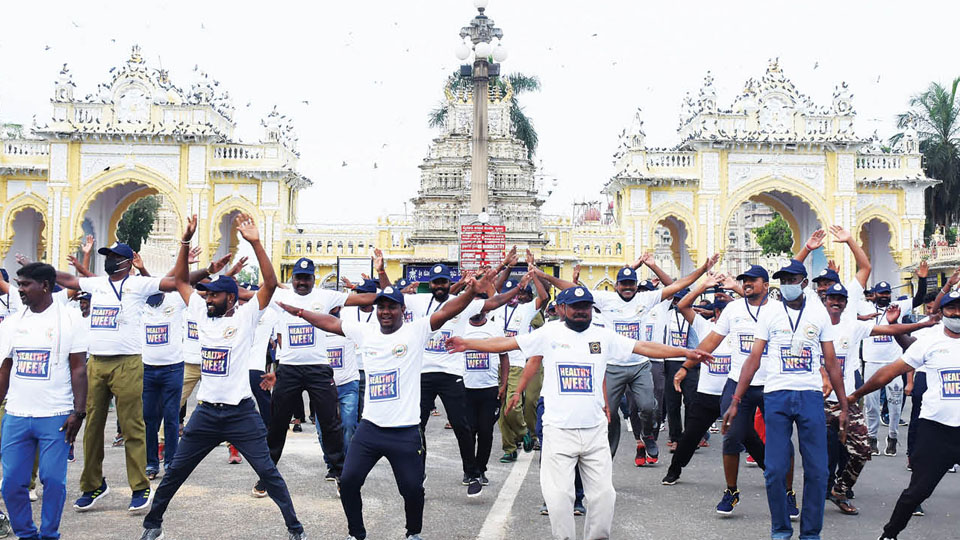 Mysore/Mysuru: As part of Safai Mithra Challenge Health Week, the UGD Division of Mysuru City Corporation (MCC) had organised a Marathon for Pourakarmikas in city yesterday.

About 300 Pourakarmikas took part in the Marathon, which was flagged off by Safai Karmachari Commission Chairman M. Shivanna in front of Kote Anjaneyaswamy Temple at the North Gate of Mysore Palace.

Speaking on the occasion, before flagging off the Marathon, Shivanna said that there was a request for remittance of salaries of Pourakarmikas of UGD Division directly to their Bank accounts and added that he had discussed the same at the Government-level with the State Government’s Chief Secretary and the salaries would be deposited to the Bank accounts soon.

Though the Government has banned manual scavenging, the same was taking place at some places which is wrong, he said and added that there is a need to create awareness about it.

Mayor Sunanda Palanetra, who also spoke on the occasion, said that the role of Pourakarmikas is very much needed for Mysuru to bag the ‘Cleanest City in India’ tag and added that MCC was ready to solve the problems faced by the Pourakarmikas of the UGD Division.

As part of the Health Week, the MCC UGD Division has organised the following programmes for Pourakarmikas in association with Namma Mysuru, State Bank of India (SBI), Jayachamaraja Wadiyar Golf Club, Suyog Hospital and Swastha Yoga: