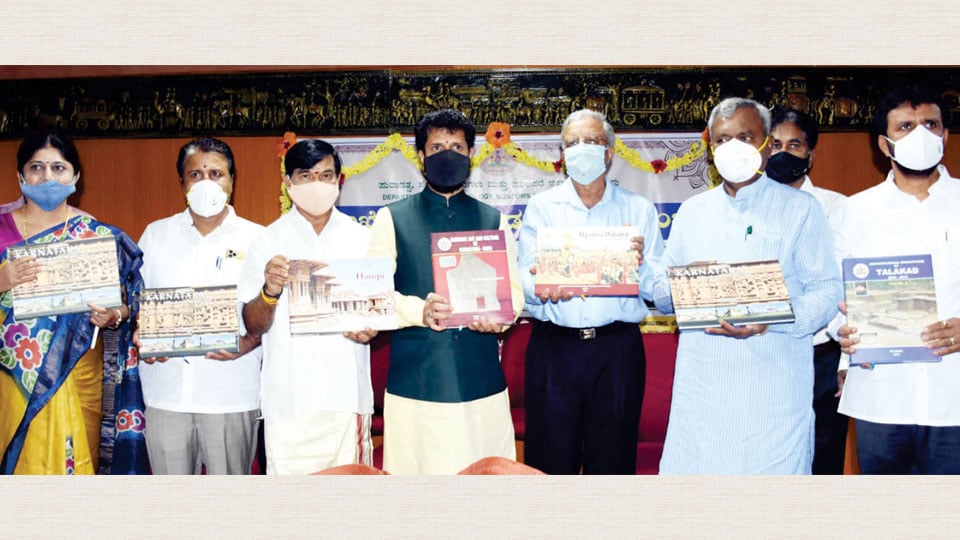 Mysore/Mysuru: Tourism, Kannada and Culture Minister C.T. Ravi has said Alamelamma’s alleged curse to Wadiyar family of Mysore is definitely a big challenge to Science and it required an indepth study.

Speaking at the release of five books brought out by the Department of Archaeology and Museums here on Monday (Oct. 26), he said they have learned through elders about Alamelamma’s curse —  “Talakadu maralagali, Malangi Maduvagali, Mysuru Doregalige Makkallilade Hogali” (May Talakad turn into a barren expanse of sand, may Malangi turn into a whirlpool, may the Rajas of Mysore not have children for all time to come). Malangi is a village on the banks of river Cauvery. Alamelamma is said to have uttered this curse as she took the leap to her death by jumping into a whirlpool in river Cauvery at Talakad.

Ravi said while some say it as blind belief, adoption by the Mysore rulers for the last six to seven generations has given credence to it. This is indeed a big challenge to Science and required a detailed study, he opined.

Excavation in Talakad has revealed that a goldsmith was faking the Roman coins seven hundred years ago. This has been recorded in a book ‘Archaeological Excavation at Talakad Volume-2’ and this indicated the close bond between India and Rome during that period.

It all started in 1610, when Raja Wadiyar conquered the Fort of Srirangapatna from Tirumala (Tirumalaraja), then Viceroy of Vijayanagar. Tirumala is said to have retired to Talakad with his two wives. One of them, Alamelamma, was a staunch devotee of Sri Ranganayaki, the consort of Sri Ranganatha, the presiding deity of the famous Adi-Ranga temple in the island fortress of Srirangapatna.

Tirumala suffered from a terminal disease on his back known as the “disease of the kings.” The condition of Tirumala deteriorated and he died. Alamelamma had a large amount of precious jewellery, including a fine nose ring studded with a large pearl. As a widow she was no longer permitted jewellery. She donated the jewels to the temple of Sri Ranganayaki. Every Friday and Tuesday Sri Ranaganayaki was decorated with a large pearl-studded nose ring and other precious jewellery, which was put into the safe custody of Alamelamma the rest of the week, since she was known to be a staunch devotee of Sri Ranganayaki.

The temple authorities requested Raja Wadiyar to give them the custody of the jewels, as was the normal practice. The Treasury officials informed the king of this fact. Raja Wadiyar thought these jewels were of no value to Alamelamma, as she was now a widow and didn’t have children, she would no longer need them. Raja Wadiyar sent emissaries to Malangi, where Alamelamma was staying, with a request to return the jewels. Only the pearl-studded nose ring was returned by Alamelamma. Raja Wadiyar then sent his army to Talakad to ask her once again and, if she refused, to seize them by force. To escape the wrath of the Mysore army, Alamelamma uttered the legendary curse on Raja Wadiyar and jumped into a whirlpool in the River Cauvery at Talakad with the rest of the jewels and escaped unscathed.