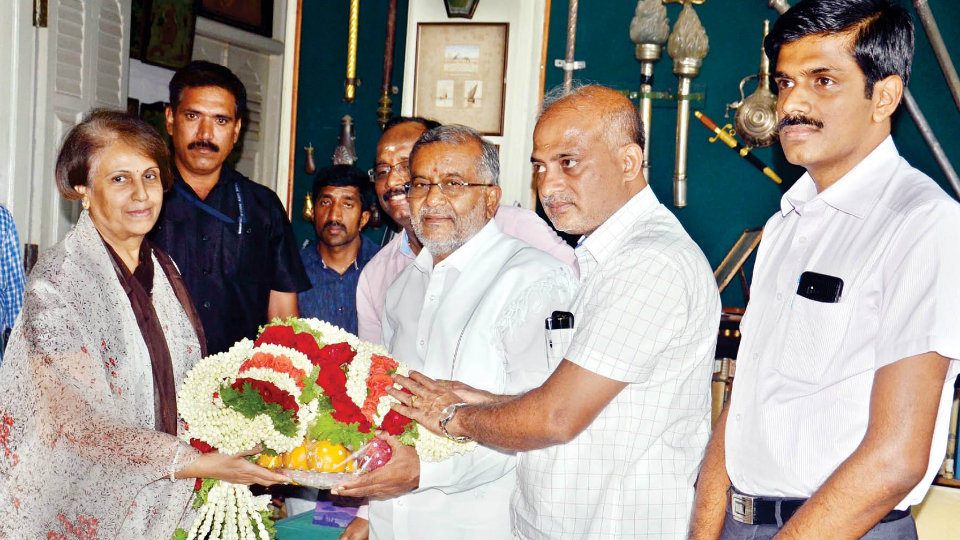 During their talks, the Ministers sought the royal family’s support for the successful celebration of Dasara. Mahesh also informed Pramoda Devi about the nomination of Yaduveer Krishnadatta Chamaraja Wadiyar as the tourism Brand Ambassador for Mysuru region.

“This is a courtesy call. We will come again on behalf of the Dasara Festival Committee to invite the royal family members to the festivities,” Devegowda told reporters after the visit. “As per tradition, we had not met Pramoda Devi ahead of Dasara and that is the reason for this visit,” he added.

S.R. Mahesh said the contribution of the Wadiyars was immense and expressed gratitude to Yaduveer for agreeing to don the role of Ambassador for tourism promotion.

“A formal invitation will be extended on Oct. 3 to Sudha Murty, Chairperson of Infosys Foundation, who will inaugurate the Dasara festivities along with Chief Minister H.D. Kumaraswamy and Karnataka Governor Vajubhai R. Vala atop Chamundi Hill on Oct. 10,” the District Minister added.

Speaking on the visit, Pramoda Devi Wadiyar said that this was a courtesy visit and the Ministers would meet her in the future to discuss Dasara preparations.

“Dasara festival (Navarathri) at the Palace will be held traditionally as every year. There is no difference of opinion between the government and the royal family. What we are asking is that on the Vijayadashami Day, after the idol of Goddess Chamundeshwari is worshipped at the Palace, the idol must be returned to its original place. But officials are always in a tearing hurry and do not allow us to perform the traditional rituals. This must be avoided,” she said.

On the Doddakere Maidan controversy, Pramoda Devi said that there is no relationship between Garike Mala and Doddakere Maidan. “Officials must realise that all Courts have ruled in favour of the royal family. Doddakere Maidan is different from Garike Mala and this is not understood by officials. I am keeping quiet because the place is used by public for parking and moreover I do not have the intention of fighting with the officials every year,” she said.

“Mysuru has the highest number of visitors in South India and I will strive to boost tourism potential of this heritage city,” he said and added that more and more programmes must be chalked out to attract tourists to Mysuru.