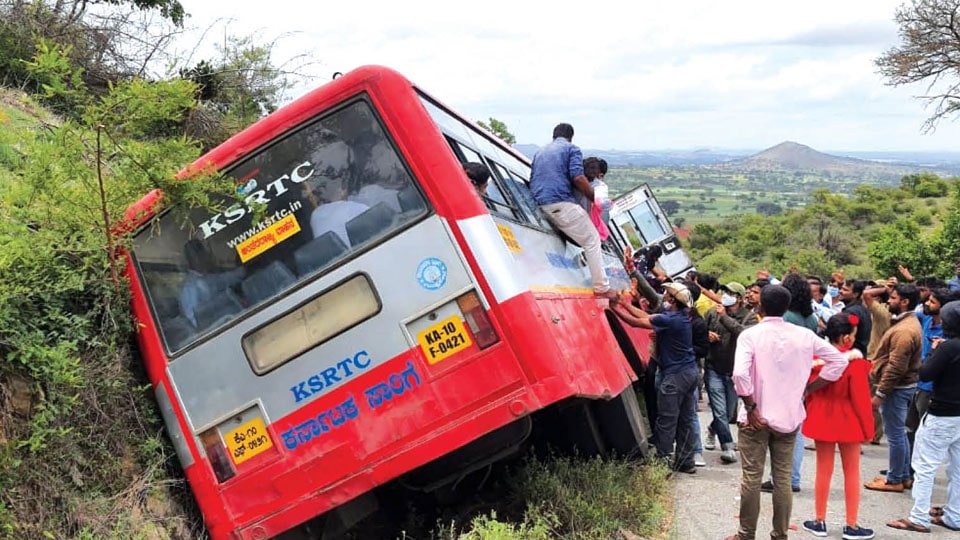 The KSRTC bus was ferrying the devotees to the foot of the hill, when the bus driver, in a bid to avoid hitting a jeep coming from the opposite side, lost control of the bus and swerved the bus to his left side resulting in the left side wheels of the bus slipping into the roadside ditch.

Had not the bus driver used his presence of mind, a major disaster would have taken place if the driver had swerved the bus to his right side.

As the main door of the bus was pressed against the hill, passengers were rescued through the emergency exit of the bus and the jeep belonging to Kallipura Forest Development Committee has suffered damage.

Details: With Sunday being a holiday, hundreds of devotees visited Gopalaswamy Hill to have darshan of the deity at Gopalaswamy Temple atop the hill. In this backdrop, KSRTC had deployed eight buses to ferry devotees to the hill top and back.

While one of the bus was ferrying devotees down the hill, the vehicle belonging to Kallipura Forest Development Committee came in front of the bus and the jeep driver, on seeing the bus reportedly stopped the vehicle in the middle of the road.

The bus driver, on seeing the jeep stopping on the middle of the road suddenly, swerved the bus to his left side to avoid ramming into the jeep and in the process, the left side wheels of the bus slipped into the roadside ditch and tilted towards the left side. As the bus tilted to the left side, the door was pressed against the hill and the passengers had to come out of the bus through the emergency exit. KSRTC officials said that the bus was pulled out of the ditch with the help of a crane later.

Tourists, devotees throng the hill, Bandipur in large numbers: After the lockdown was relaxed and weekend curfew lifted, hundreds of tourists and devotees began to arrive at Bandipur and Gopalaswamy Hill. As private vehicles are not allowed atop the hill, KSRTC had deployed eight buses to ferry devotees to the hill top.

From morning till evening, more than 3,000 visitors visited Bandipur and Gopalaswamy Hill.