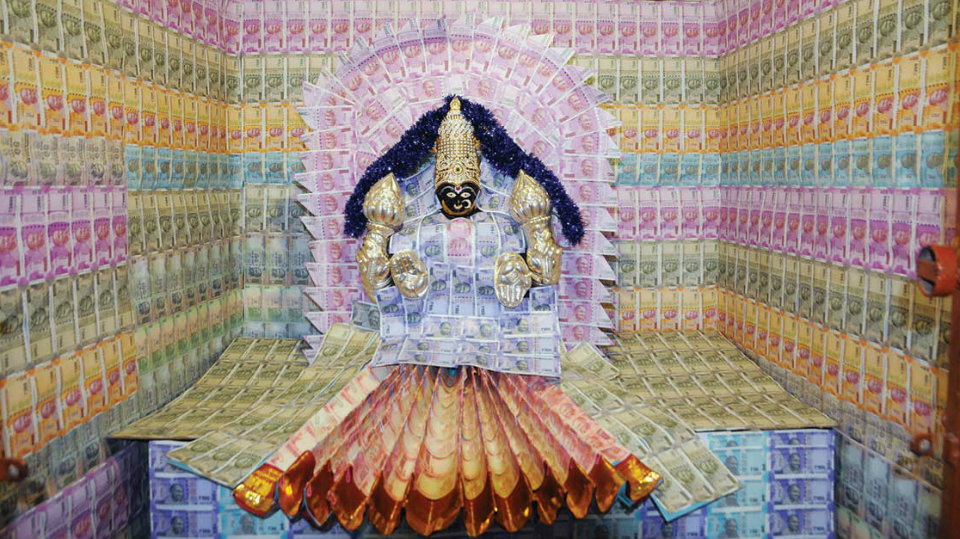 Money, money, money… can money buy one all the happiness of the world?  As a famous monk in his sermon told, “The poorest man on this earth is the one who has only money and nothing else” but in spite of this we continue to chase Lakshmi [Goddess of Wealth] to eternity.

Recently, a beggar was found dead on the streets of Kolkata and when her belongings were checked, an amount of Rs.10 lakh was discovered. With that much money in hand, the beggar was still begging on the streets and died as laawaris corpse.

How much time and energy she must have spent scrounging to save that much money which ultimately was gobbled up by the State ! If that money had been invested properly she could have lived a decent enough life. And whom was she saving the money for?

Since I am a Trustee of an Old Age Home, I come across so many unbelievable stories of so-called rich, who refuse to take care of their own parents and throw them to the Old Age Homes. One can understand if the children are abroad and are unable to take care of their own, but how can one justify or understand when children having own homes in Bengaluru, living in posh bungalows, ironically given by their parents, send the aged to the Old Age Homes.

They are ready to bear the expenses  of having a nurse too  but do not want to take care of their parents in their own homes. Most of them forget that they also have to get old some time and their children may also send them packing to an Old Age Home !

To quote another middle class family of two children: When the time came as to who will take care of their widowed mother, both refused giving some flimsy reasons. Ultimately she was put up in a cheap Old Age Home and she passed away. The drama started later. All the children joined and a grand party was hosted. Costly sarees were distributed. This whole drama was enacted to show the world how much they loved their  mother !

Where has all the genuine love and affection gone ? Materialistic world, no doubt but has real affection, love and respect gone with the wind? Sometimes I wonder, whom do we want to impress with all our houses, properties and fat weddings? Does one remember after two days what one had at someone’s wedding?

Why do we work like dogs till our prime years, to save and save for our children ? How many generations do we want to feed ?  How much is the “need” and how much do we actually “want.” Think about it.

Are our next generation incapable of earning their livelihood? Why do we Indians save so much for our children? Can we not spare one-and-a-half-days in a week for family, friends and self?

Do we spend even 5 percent of  our wealth for our own enjoyment? Why one can’t enjoy simultaneously when we earn too?

It seems God laughed aloud when somebody said, “I am the owner of all this land.” We do not own properties, we just have temporary name on documents.

A businessman friend of mine used to save and save, not enjoying his life, not going on a holiday or even small outings. He said that since he had a disturbed childhood with a shortage of money, he wanted to ensure that his children are well provided for in their prime. Once he was having an argument with his teenage son and was shocked to hear his son say “Did I ask you to save so much for us? Give us money when we require rather than saving for future. We can take care of our future.”

These words shattered him.  This is a reality check. Most Indian families live under a false illusion that their children would be grateful to them for having amassed wealth for them but it is not so.  Very few children, multiply and improve the businesses given by their parents, most of them squander their wealth and become wayward. To be born as an Ambani is their own karma but to take forward the businesses they inherit and multiply depends on upbringing.

READ ALSO  A sauna of wisdom, the need of the hour

To conclude, live your life. Save for your children to take care of their needs but learn to give. Donate generously. The younger generation has a different perspective of life.

A  small story:  One day a wealthy man took his young daughter to a small village to experience what it felt like to be poor so that she could learn to give back. They spent a couple of days with a poor family and tried to help them.

On the return trip, the father asked his daughter, “How did you find the trip? What did you learn?”

“It was great, I learnt so much,” replied the daughter.

He said, “Did you see how the poor live and go through their lives?”

She said, “I saw that we have one dog, and they have four.

We have a pool that reaches the middle of our garden and they  have  a lake.

We have the imported lanterns in our garden that light it up, they have the stars.

We buy our food, they grow theirs.

The father was speechless, and then his daughter said, “Thank you dad, for showing me how poor we really are !”

Often we are thinking that we are helping and uplifting others. And in the process we realise that we are the ones who  have gained the most ! Perspective of wealth differs from person to person and generation to generation. It is all in the mind. Ironical, no money or too much money brings misery.  But a basic question remains: By hoarding, how many generations do we require to feed?  Are our newer generations not capable of taking care of themselves?  Any answers ?