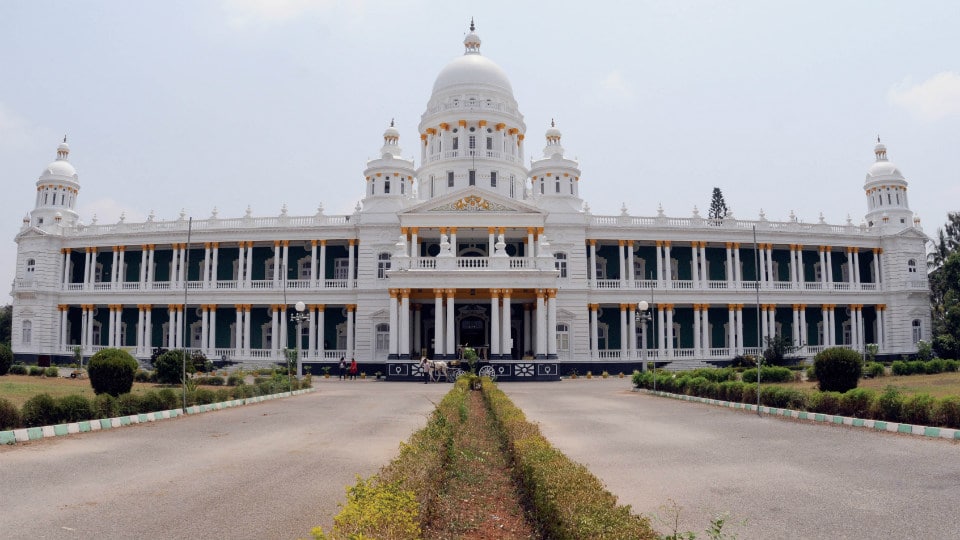 After reading the article by N.K.A. Ballal, Retd. Sr. Vice-President, ITDC, on the Lalitha Mahal Palace Hotel run by ITDC, now being handed over to the State Government which in turn has given it to the State-owned Jungle Lodges and Resorts Ltd., which in turn is likely to call a global tender to take over the running of the hotel and the two nostalgic photographs published by Star of Mysore recently, I had a call from my friend K. Vijaya Kumar, former Jt. Director of Information & Publicity, Government of Karnataka.

He was reminding me of what he wrote in SOM dated 21st August 2011 about this hotel under the title “Taking charge (!) of Lalitha Mahal Palace: A difficult task in my official career.” He was taking it over from the then Maharaja of Mysore Jayachamaraja  Wadiyar, on behalf of the Government of Karnataka in the beginning of 1970. I would like to re-produce this article here as I guess it is very topical and timely to remember the past happenings of the hotel, about how it was taken over before its transformation into a hotel of great heritage value. – KBG

Taking charge (!) of Lalitha Mahal Palace: A difficult task in my official career

Sometime back, I went to Lalitha Mahal Palace — now Hotel — to attend the wedding of my friend’s daughter. As there was ample time in between the rituals and lunch, I took a round of the Palace remembering the days of my association with it.

Virtually, it was ‘taking over’ of Lalitha Mahal Palace, that shimmering white imposing edifice of our Royal City of Mysore. It was, perhaps, in the beginning of 70s when it was under the Government control after Maharaja’s rule, and looked after by the Department of General Administration (GAD). It was then handed over to our department and I was asked to take charge as I was then serving in Mysore. It was, indeed, a great surprise to me as I did not know why this was happening.

Before I proceed further, a short description of this beautiful Palace with interesting facts: Built in 1921, exactly 90 years ago, by Maharaja Krishnaraja Wadiyar Bahadur IV to host his most important guest, the Viceroy of India, it was designed by an English architect E.W. Fritchley and constructed by our local contractor B. Munivenkatappa.

This impressive architectural edifice is in the style of St. Paul’s Cathedral in London, particularly the central dome. The beauty of the inner architecture is beyond description. 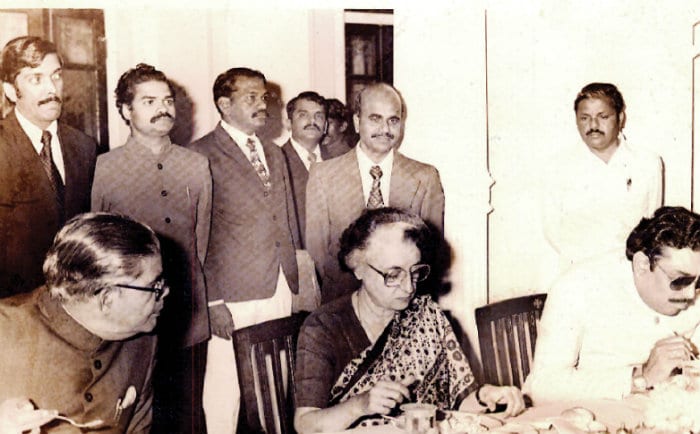 The then Prime Minister late Indira Gandhi, who was on a visit to city, seen having lunch with the then Governor Govind Narain and Chief Minister R. Gundu Rao at Lalitha Mahal Palace Hotel. The CM had sent for me to convey some very important message of PM to the Press. Hence, myself (standing second from right) and CM’s Personal Secretary are seen waiting behind them.

A few salient features of the Palace for those who have not seen it: “The showpiece interiors, with immaculately polished Venetian marble floors, priceless carpets, ornate rosewood furniture and the stately balustrade staircase that sweeps up to the stately upper floor is breathtaking. The Central Hall is adorned with life-size portraits of the royalty, lithographs portraying Tipu Sultan’s skirmishes with the British, decorative motifs on the walls and ceilings, stained Belgian glass domes, carved wooden shutters, wall panels and myriad touches of regal embellishment” [Ref: From the brochure ‘A Heritage Hotel’ brought out by ITDC].

Built towards the east of the city on an elevated sprawling land, one can enjoy views of Mysore city from the front terrace of the hotel; particularly watching the illuminated Palace in the night will be awesome.

You can imagine my plight of taking charge of this magnificent Palace with the help of a skeleton staff in my office. It was a hard task. Some how, I had to manage as my then Director (late M.D. Mariputtanna, perhaps), wanted an early compliance report. The Government’s idea was to entrust it to Tourism Wing. GAD personnel who was in-charge of Government Guest House Kumara Krupa came down from Bangalore for handing over the charge. I think it was one Ananthaiah, a dynamic person who was earlier in Mysore in Chamundi Guest House and whom I knew well. He simply asked me to sign an Inventory Register assuring me not to worry and left coolly to Bangalore.

But what Ananthaiah did not visualise was how I would manage to take care of the Palace. Well, it started with locking all the rooms and several entrances — a hard job. And then posting of a watchman  which I had to do by deputing a ‘D’ group employee from my office. Though he refused for the deputation in the beginning, later I was told, he was making good money by allowing visitors from the back entrance to have a quick look inside.

When I admonished him, he asked to be excused. Then he began to tempt me to stay one night with my wife in the Viceroy suite upstairs. The water and electricity work completely cut off. Still he was trying to tell me that he would arrange candle light and fetch water in buckets from a nearby public tap. I had to scold him for this wrongful  suggestion and warned of action if there was any lapse in his duty in future. But it was difficult for me to supervise the Palace closely as I was always busy with my regular work. And added to it, the distance from my office to Lalitha Mahal.

Later, the Government allowed our department to let out the Palace for film shooting. It is a sad story that the decision allowed for much damage of the Palace, though many conditions were laid as to how film shooting should be done without causing even slight damage to the Palace. Very popular Hindi movies with stars of yesteryears were filmed in Lalitha Mahal.

A lot of people used to throng outside the Palace near the lawns to see their favourite stars who would come out after film shooting inside the Palace. During one such film shooting, I received a call that there was fire in Lalitha Mahal. I reached immediately with all anxiety to find just the huge lawn outside, which had dried due to summer, was fully charred and I was greatly relieved that nothing had happened inside the Palace.

On enquiry I found that two Maalis were responsible for doing this as they were not allowed inside to watch the  film shooting. It did not end there as I was asked by the government to make  a detailed enquiry and send a report ensuring proper fire safety measures (when the water supply to the premises was cut off!). During the correspondence, a ‘big file’ developed.

Thank God, a short time later, our government handed over the Palace to the India Tourism Development Corporation (ITDC) on long lease, to run it as a heritage Hotel. Come September, it was on Sept. 13, 1974 (exactly 37 years ago), Dr. Sarojini Mahishi, the then Union Minister of State for Tourism and Civil Aviation, inaugurated it as Lalitha Mahal Palace Hotel, a unit of ITDC.

Maharaja Krishnaraja Wadiyar Bahadur IV had laid the stone on 18th Nov. 1921 commissioning it as a Royal Guest Palace for his most important guests. He never knew that it will turn into a hotel after 53 years.

Visitors can have a look at the two marble plaques — that of Maharaja and Mahishi — on either side of the portico.