Home » News » ‘My husband shied away from doctorates and refused many’ 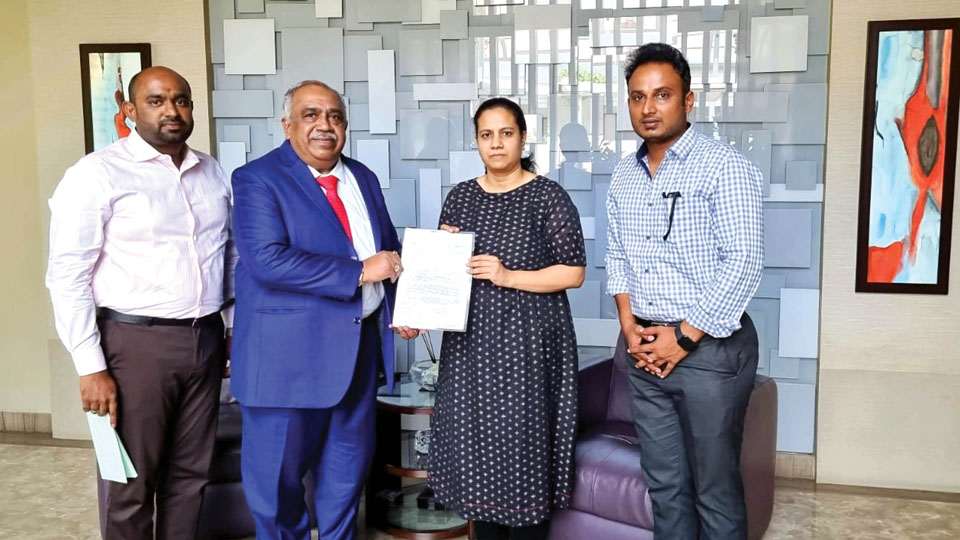 ‘My husband shied away from doctorates and refused many’

Mysore/Mysuru: It is a known fact that while directors and producers never shied away from using the legendary actor late Dr. Rajkumar’s dynasty for promotion of their films,  Puneeth Rajkumar never used his status as Dr. Rajkumar’s son to promote himself or his films. For him, work and service was paramount and he was reluctant to accept honorary doctorates during his lifetime and politely refused the honour many times. This was revealed to University of Mysore (UoM) Vice-Chancellor (VC) Prof. G. Hemantha Kumar by Puneeth’s wife Ashwini Puneeth Rajkumar when the former had been to her house in Bengaluru.

The VC had been to the late actor’s house at Sadashivanagar in Bengaluru last Saturday to convey the decision taken by the University to confer honorary doctorate on Puneeth Rajkumar posthumously at its 102nd annual convocation on Mar. 22. Ashwini accepted the invitation and told the VC that she would attend the event at Crawford Hall.

Puneeth Rajkumar, who passed away last year, was chosen for the honorary doctorate posthumously in recognition of his contribution to Kannada cinema and philanthropy. Along with Puneeth, former Director General of DRDO (Defence Research and Development Organisation) Dr. Vasudev Kalkunte Aatre (V.K. Aatre) and folk musician M. Mahadevaswamy are the other two personalities being conferred with the honorary doctorates.

Speaking to Star of Mysore this morning, Prof. Hemantha Kumar said that Ashwini Puneeth Rajkumar turned emotional when she was told about the posthumous honorary doctorate to her husband. “She told me that many Universities and organisations had come to meet Puneeth during his lifetime and offered to confer honorary doctorates. But he politely refused and told them that his achievement was too small for a doctorate,” the VC said.

When he was told that even Dr. Rajkumar was conferred with an honorary doctorate, Puneeth used to say, “The scale of my father’s achievement is different. I have not grown as big as a personality like my father to receive the doctorate. I am too small and it is wrong to compare Appaji (as Puneeth called his father) and me. For me, my work and service is important.”

Ashwini told the VC that Puneeth never worked for an award and whatever he did, was with dedication and humility.

Incidentally, about 46 years ago (Feb. 8, 1976), the University of Mysore had conferred honorary doctorate on Puneeth’s father Dr. Rajkumar. Dr. Rajkumar

was 46 years old when he received the honorary doctorate and now after a gap of 46 years, his late actor-son, who died at the age of 46, is receiving the honour posthumously.

Notably, Dr. Rajkumar and Puneeth Rajkumar have become the only father-son duo to receive honorary doctorate from the AUoM. The first posthumous honorary doctorate was conferred by the Mysore University on Dr. Sri Shivarathri Rajendra Mahaswamiji of Suttur Mutt in 1989.

Meanwhile, fans of Puneeth Rajkumar have one more reason to cheer for as the doctorate comes at a time when Puneeth’s birthday falls on Mar. 17 and his last film ‘James’ will be released on that day. His wife Ashwini’s birthday is on Mar. 14 (today) and when Puneeth was alive, he used to celebrate her birthday in a meaningful way. Though Puneeth is well-known for his simple and ordinary living, he used to make birthdays memorable for Ashwini.