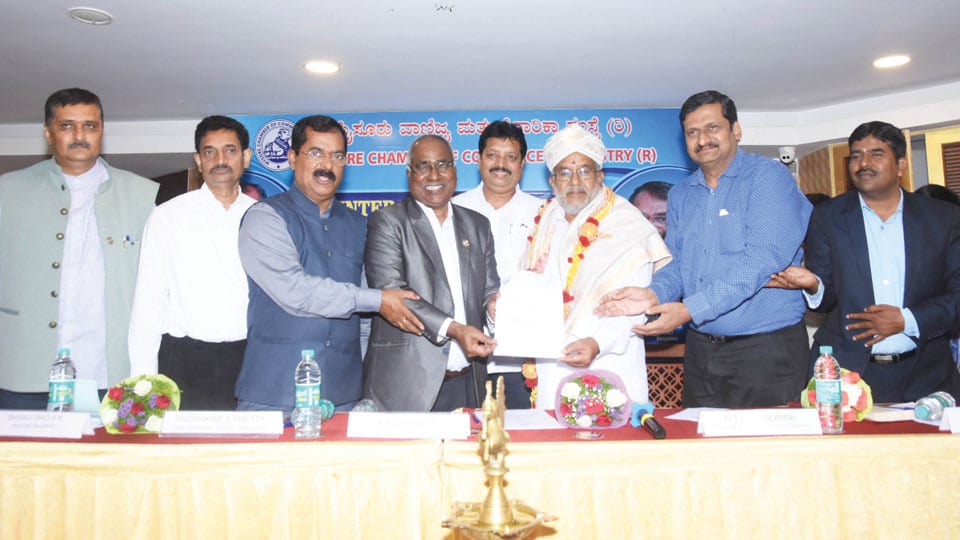 Mysore/Mysuru: Expressing dissatisfaction about the governance and development model adopted by the previous Governments, Chamundeshwari Constituency MLA G.T. Devegowda (GTD) has opined that if the present rulers had followed the footsteps of the Mysore Maharajas, the city of Mysuru would have become the most developed, green, well-planned and a people-friendly city now.

“Successive Governments have just uttered the word ‘development’ without doing anything on the ground,” he said. The MLA was speaking at an interaction with entrepreneurs, industrialists and businessmen of Mysuru at a private hotel in the city recently. The interaction was organised by the Mysore Chamber of Commerce & Industry (MCCI).

“The entire outskirts of Mysuru comes under Chamundeshwari Constituency and there are many layouts both Government and private. Most of the layouts do not have basic facilities including drinking water and drainage. The officials have approved the layouts without even inspecting them and now, the situation is like people are regretting buying a site in such layouts and building their houses out of their hard-earned money,” GTD regretted.

“I tried my best to improve the basic infrastructure when I became the Minister but the terms were too short to undertake any development works. I became the Minister twice but could not accomplish the tasks. I visit my Constituency every day to hear the people’s grievances and I try my best to solve their issues,” he added. The MLA assured the industrialists that he would make honest efforts to solve their problems.

Addressing the gathering, Mysuru Hotel Owners Association President C. Narayanagowda regretted that though nine months have passed after a portion of Chamundi Hill road collapsed, the repairs have not yet been done. “Forget repairs, not even the tender has been called to restore the road. Dasara 2022 is just four months away and thousands of people visit Sri Chamundeshwari Temple atop the Hill for Ashada Friday and also during Dasara. The Government has not even bothered,” he said.

Another issue that figured in the interaction is the absence of security at Bandipalya APMC where regular robberies are reported. Traders complained that though APMC was set up 26 years ago, the market does not have basic facilities. The MLA assured that he would call a meeting of the Police and traders soon and take steps to install CCTV cameras at the Yard.

Small and medium sector industrialists complained that when they were under the Gram Panchayat administration they paid a tax of Rs. 5,000 and after the industrial areas like the Hebbal Industrial Area were upgraded to City Municipal Council (CMC), the tax has been increased to Rs. 42,000 but still, there are not even basic roads to reach from one area to another. The issue was raised by N.H. Jayanth, President of Hebbal Industrialist Estate Manufacturers Association (HIEMA).

FKCCI Past President Sudhakar S. Shetty inaugurated the interaction and spoke about the plight of industrialists who have got little or no relief from the Government even during pandemic. “Many industries are unable to pay salaries of employees,” he said and added that Mysuru should see all-round development including infrastructure, townships, satellite townships, flyovers and multi-level parking for the industries to thrive.