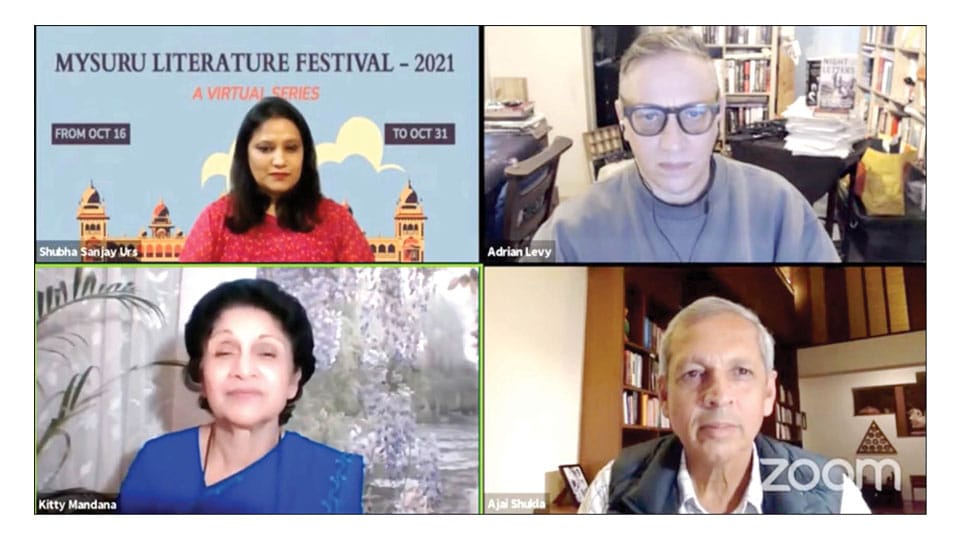 Mysore/Mysuru: Sixth day of the second virtual session of the 5th Mysuru Literature Festival unfolded with British investigative journalist and author of several books about conflicts around the Indian subcontinent, Adrian Levy explaining the complex and intricate nature of intelligence agencies. He explained the functionalities and discreteness of the intel agencies and also the difficult way in which he as a journalist collects information. “A lot of collected information is never published because of sensitive content,” he noted.

The session ‘Spy Series’ was moderated by Ajai Shukla, a retired Colonel of the Indian Army, who is a journalist writing about Military and strategic issues.

As the session began, Ajai listed out books written by Adrian and his co-author wife, Cathy Scott-Clark and called the couple stalwarts who recreated the background information of many major events. During the conversation, Adrian talked about his book on Mumbai riots ‘The Siege: The Attack on the Taj’ and said that generally real stories emerge after a lapse of time. He said that he and his partner had to work on collecting the dynamics of background stories.

He said that they heard personal stories and knit together their accounts. They understood that the recruits of Lashkar-e-Taiba had no plans of returning. He also said that every event will have a national interest which is foremost. To recover accurate details is a highly sensitive task by interviewing many from Al-Qaida, CIA, FBI etc.

Asked about Ajit Doval, National Security Advisor to the Prime Minister, Adrian said that he has met and interviewed him several times. He mentioned the hijacking of the Indian Airlines plane to Kandahar, saying that there were intelligence reports about it prior to the event but not much political weightage was given to that. Having been on the tarmac of that hijacked plane, Doval realised that negotiations are overrated and that talking does not always pay. Adrian feels that the genesis of Doval began at that point and he adapted a more offensive approach.

Comparing RAW (India’s Research and Analysis Wing) with ISI (Pakistan’s Inter-Service Intelligence), Adrian noted that the RAW is relatively a new and an amorphous organisation. He linked this nature to the fact that India was a non-aligned nation and hence the role of RAW remained a bit foggy. On the other hand, ISI was established in 1948 and is highly powerful and is filled with the American dollars.

ISI created many ‘terror puppets’ but they have over time turned against the Govt. of Pakistan itself. He went on to say that the terror units cannibalise their own country. On the other hand, RAW is harder to define because it never leads. And therein lies RAW’s success, he noted.

Ajai listed out interviews of people who are in key positions and who are thought to be generally hard to catch hold of to give interviews that Adrian has managed to engage in a conversation.

Also, he said that his success in being able to make them speak to him is the result of an attitude of not taking no for an answer. He said that any real story is much more complex than a simplistic Hollywood narrative. He recommended a documentary called ‘The Gatekeepers’ to understand better how investigative journalism in conflict zones work.

Ajai asked his reaction to an accusation that Adrian and Cathy had been asking soft questions regarding Pulwama, Pathankot and Balakot incidents. Adrian refused to accept that accusation.

Regarding Pathankot, he did say that he enquired about failure of BSF and also about uncomfortable question of how hundreds of tonnes of explosives had reached Military convoy in Pulwama. Many times, he hinted that criminal conspiracy theories fit political narratives.

Regarding the recent pull out of the US troops in Afghanistan and the rise of Taliban, he cautioned that India should be concerned. He also said that for every story, any country would have two narratives. One public which is political and the other is private where the nitty gritty of the data available is analysed. He said that Al-Qaida has never been an influencer in Kashmir and that manipulative attempts by Pakistan are not a secret.

Adrian ended the session by talking about his next book ‘Forever Prisoner’ which is also coming out as a film. Kitty Mandanna, Trustee of the Mysuru Literary Forum Trust, welcomed the gathering and Trust Chairperson Shubha Sanjay Urs introduced Adrian Levy and Ajai Shukla.