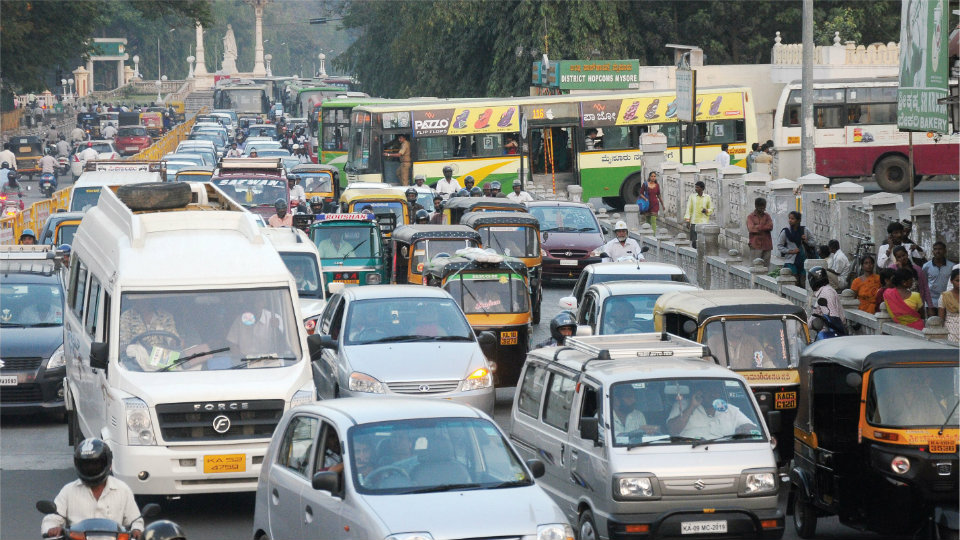 Why Mysuru needs a traffic study?

Bengaluru Way — It is oft-repeated statement that Mysuru is going the Bengaluru way. But what does “Bengaluru way” mean? This statement summarises the phenomenal transformation that Bengaluru has undergone.

Before the integration of the State, Mysuru was the capital city whereas Bengaluru was a cantonment city. Makkaji Chowk, Doddapete, Santhepet and Shivarampet became the commercial hub of Mysuru. Despite subsequent expansion, this city centre continued to be the epicentre of commercial and cultural activities. This same area went on to become Central Business District (CBD) in the Master Plans. Double-tracking of railways and the widening of road link between Bengaluru and Mysuru opened up mini-exodus from Bengaluru to Mysuru.

Establishment of IT-based service units in Mysuru created white-collar jobs in large numbers. The economic scene in Mysuru changed from a sleepy town to a vibrant one. With electrification of railway track and six-lane conversion of Bengaluru-Mysuru Road on the anvil, there is every possibility of Mysuru going the Bengaluru way. But the total defacing of Mysuru will be faster than Bengaluru.

Mysuru had only about 7,000 vehicles in 1970, but by 2016, this was up by over 8 lakh! Consequently, the roads were widened time and again, taking away sizeable portions of footpaths. Further, these reduced footpaths are occupied by hawkers. Pedestrians are forced to walk on the roads, which are dangerously congested.

The situation is precarious in the CBD. Despite shifting of wholesale shops from Santhepet and opening up of Devaraja Urs Road as a new shopping area, congestion of traffic on Sayyaji Rao Road, Shivarampet, Irwin Road, Ashoka Road, Bengaluru-Nilgiri Road between Five Lights Circle and Hardinge Circle has not reduced. On the contrary, it has increased substantially. Closing down of Makkaji Chowk has put extra pressure on these roads.

It is an irony that shop owners complain of loss of business by the passing day despite ever-increasing crowds and high density of vehicular traffic in the CBD.

Then what is causing this traffic congestion? CBD is also categorised as the Heritage Zone with the location of places of touristic importance. The Palace is the epicentre of CBD. Devaraja Market, Jaganmohan Palace, Zoo and Karanji Lake makeup for the tourist attraction.

However, if there are no proper steps taken to overcome this traffic mess in the CBD, even tourism will take a beating. What happened to Avenue Road, Kempegowda Road in Bengaluru will soon happen to CBD   pretty soon.

Need for the study

No study is known to have been made for unravelling this phenomenon. Mysuru Nanjangud Master Plan, being a land use plan, confined itself to finding places for multi-level parking and road-side parking. It did not delve into causes for and consequences of over-powering traffic.

Mysore Agenda Task Force (MATF) had tried but the Report could not see the light of the day as MATF was wound up. MUDA and MCC are said to have carried out some such study but their reports are not in the public domain. Or for that matter, neither of them seems to have taken this problem seriously.

Mysore Grahakara Parishat (MGP) is of the opinion that only a proper diagnosis can help in prescribing remedial measures. It has been drawing the attention of public and authorities to this grave problem of traffic congestion through publication of articles in newspapers and holding of meetings.

MGP tried seriously and repeatedly to convince the authorities to set up a Task Force consisting of experts and stakeholders to understand the causes for heavy vehicular congestion. Unfortunately, MGP could not succeed in its efforts. MGP has now decided to undertake this study by itself.

MGP will collect all secondary data available in the public domain to draw up a fair picture of causes. It will hold deliberations with stakeholders such as businessmen, business associations, medical services, user groups, Railways, KSRTC, Regional Transport Authorities, Transport Authority of the District, Police Department, MCC, MUDA, civic authorities of the district and the other NGOs and associations like Rotary and Lions. MGP also is planning to get help from leading educational institutions of Mysuru.

The central idea behind this study is to find out the reasons for prevalence of ironic situation of high congestion of vehicular traffic, coupled with complaint of lack of business. It will list out short-term and long-term remedial measures.

MGP hopes that this study will help save Mysuru from going the “Bengaluru way.”