Home » COVID-19 » Mysuru on a Mission: MCC sprays disinfectants in all 65 wards 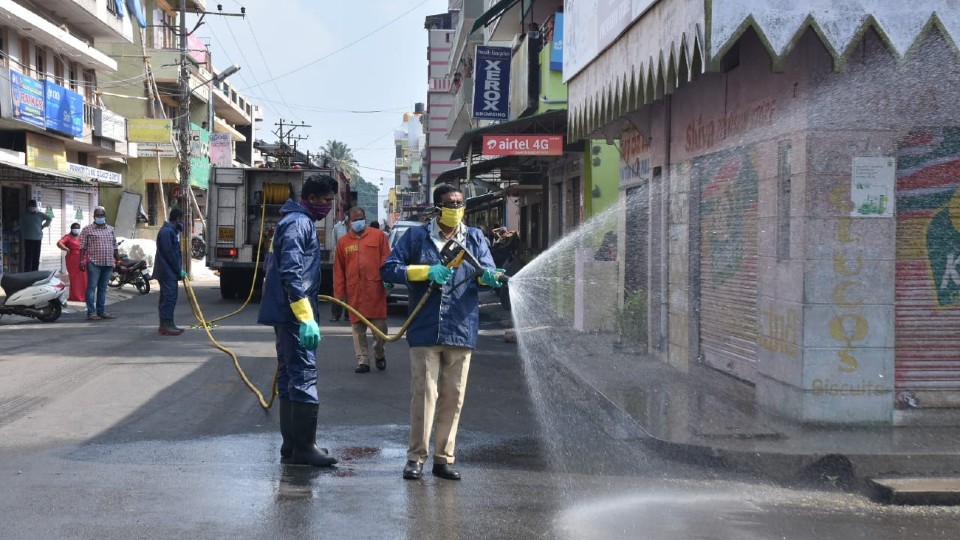 Mysuru on a Mission: MCC sprays disinfectants in all 65 wards

Mysuru/Mysore: Preventing the spread of COVID-19 and disinfecting public places across Mysuru as a precautionary measure, the Mysuru City Corporation has taken up massive sanitisation drive. Civic workers are fumigating and spraying anti-viral chemicals in all the 65 Wards under its nine zones.

The spraying process began with the MCC workers and Fire Department personnel, fully secured with masks and proper work boots, using jet sprays to kill the virus on the surfaces of roads and buildings, if any.

Since India has already entered Stage 3 and people still thronging markets and getting out of their houses unnecessarily, fumigation through chemical spraying is the only hope to break the chain of the outbreak. Till now, only roads and circles were being fumigated, but now, MCC has taken all measures to sanitise all the houses across the city including streets, local market areas, road dividers, bus stops, parks and footpaths in each Ward.

MCC Health Officer, Dr. D.G. Nagaraju, who spoke to Star of Mysore, said, “In all the nine zones of MCC with a total of 65 Wards, an anti-viral chemical is being used to sanitise through jetting spray machines exclusive for each zone, using Fire Brigade vehicles. Each house and all the public places in these Wards are being sanitized using these jetting sprays with each machine having a 10-ltr capacity, and which can be used for up to 100-150 houses.”

“Our personnel will be spraying sodium hypochlorite solution as a disinfectant around public places in the interest of public health and safety. This is one of the several measures that we have taken to prevent the outbreak of any epidemic,” he added.

Also, fearing airborne virus, many residents have been calling up the MCC requesting them to spray disinfectants in their areas on a day-to-day basis. “Don’t get panicky. We will spray the disinfectants in every ward to contain the spread of the virus, MCC Commissioner Gurudatta Hegde said in a video that has been released by the Mysuru Information Department. He added that maps have been drawn for the areas where disinfectants will be sprayed and every Ward will be covered,” he added.