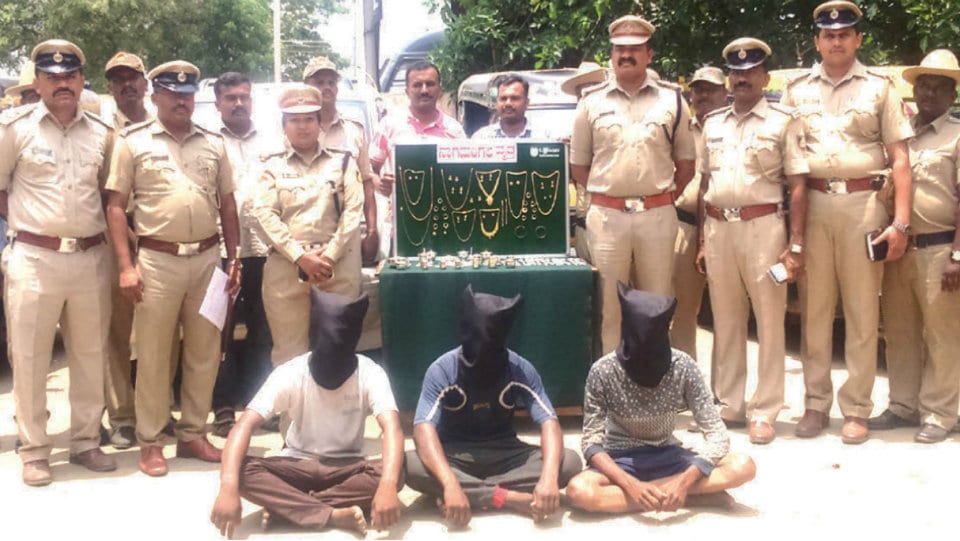 Nagamangala: In a major breakthrough, the Nagamangala Police who busted a gang of robbers and have recovered jewellery and stolen vehicles worth about Rs. 26 lakh from the gang members.

With the arrests of the nine gang members, the Police cracked a murder, a dacoity, 11 house burglary and 10 vehicle theft cases across the taluk.

Out of the nine arrested, two are juveniles who have been remanded in rehabilitation centres, the SP said. The crimes committed by the gang came to light when the Police began investigation into a murder, in which one Girish of Tavarekere in Bellur Hobil was brutally murdered and his body dumped in a pit that was dug for repairing a water pipeline. The Police held the nine on suspicion and during interrogation, they spilled the beans.

Based on the information revealed by the gang members, the Police cracked a total of 23 cases registered in the Taluk. The Police have recovered 350 gram gold jewellery, 1,560 grams of silver jewellery in connection with 11 house burglary cases and a Scorpio vehicle, a tractor-trolley, 4 autorickshaws and 7 motorcycles in connection with 10 vehicle theft cases. The total value of the properties recovered by the gang is about Rs. 26 lakh, SP Radhika said.

All the accused were produced before the Court and three out of the nine arrested have been taken into Police custody for further investigation, the SP added.

The SP also announced a cash reward of Rs. 20,000 to the Police team headed by Nagamanagala CPI D.P. Dhanraj, PSIs B. Chidanand, Pramod Kumar and K.N. Chandrashekar and staff, who carried out the investigation under the guidance of ASPN. Lavanya and Dy.SP Dharmendra.