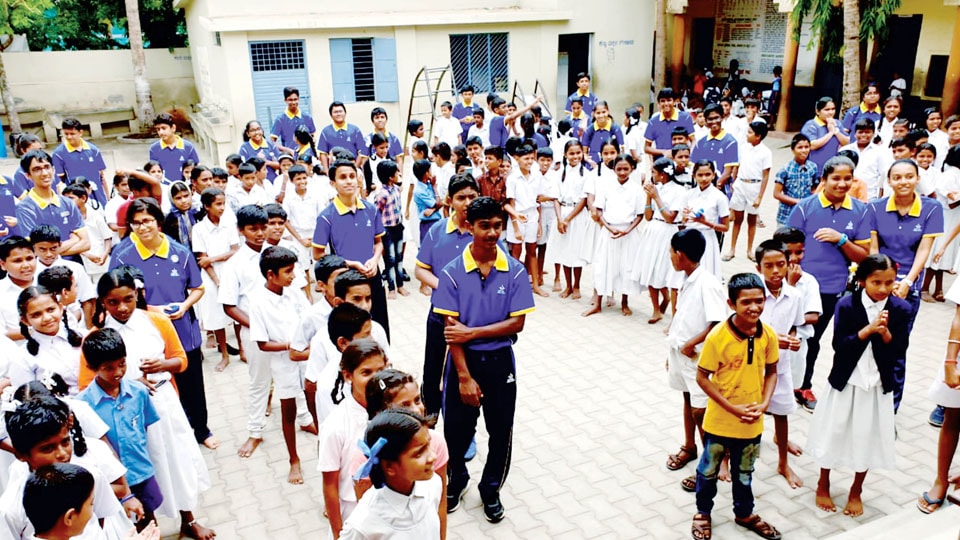 The concept of “Twinning of Schools” as envisaged in the new National Education Policy-2020 (NEP-2020) is an idea that Pratham Mysore developed and implemented a year ago. It adds value to a child’s learning. The twinning (pairing) was between Excel Public School and MG Koppal School. The new NEP has validated Pratham Mysore’s thinking and it is a proud moment for the NGO. This article is a report of the experiment that Pratham Mysore developed and implemented successfully. The note in the end by K.G. Mathew, Principal, Excel Public School, the partner in the initiative, is testimony to the programme’s success.—Ed

Much of the spotlight of the new National Education Policy-2020 (NEP-2020) is on its highlights. The importance of early child education, rationalisation of school education system from 10+2 years format to 5+3+3+4 years, reducing curriculum content load, making space for critical thinking, increased funding towards education will be path-breaking when implemented both in letter and spirit. It will surely elevate our educational standards to be on par with any other developed nation. The NEP is 60 pages long and it is natural to miss many other significant initiatives and suggestions. One such nugget is contained in Clause 7.10. This clause reads as follows:

“To further enhance co-operation and positive synergy among schools, including between public and private schools, the twinning / pairing of one public school with one private school will be adopted across the country, so that such paired schools may meet / interact with each other, learn from each other, and also share resources, if possible. Best practices of private schools will be documented, shared, and institutionalised in public schools, and vice versa, where possible.”

Anyone who is familiar with the Indian schooling system will instantly recognise the merit in the above inclusion. There exists a vast divide between the public schools and private schools. The private schools, thanks in part to the higher fees charged and more accomplished teachers, offer better quality education. Better infrastructure obviously results in better outcomes. The twinning programme included under Section 7 (Efficient Resourcing) of the NEP hopes to bridge this divide.

Pratham Mysore, an NGO working to improve the quality of education among public school children, had, for exactly these reasons piloted the ‘Twinning’ programme in early 2019 in Mysuru. The inclusion of this ‘Twinning’ programme in NEP is now a validation of its ideas. Here below is an account of the twinning programme it initiated between Excel Public School (https://excelpublicschool.com/eps/), a much sought after private school and Manche Gowdanakoppal School (MG Koppal School), a public school.

Methodology of the Twinning Programme

A preliminary assessment of the shortlisted public and private schools was made to evaluate the aspirations of the children and teachers to ensure a proper match. In the public school, children of Class 5, 6 and 7 were chosen for the programme as it required certain level of maturity and communication skill. And at the private school, students selected were from Classes 9 and 10 so that older kids would be able to show greater empathy and patience in dealing with younger kids of the public school.

Pratham Mysore ensured that the objectives (to teach the public school children to improve conversational English, computer skills and interpersonal skills) of the programme was clearly communicated to all the stakeholders. The consent of parents of all the children involved was taken in advance. It also ensured the availability of basic infrastructure such as computers, WiFi connectivity and relevant library books were available in the public school. It was equally important that private schools would provide teachers to accompany during visits and transport to ferry children on designated days. This included periodical visits by public school children to private school.  Pratham volunteer’s presence made sure that there were no gaps in the programme’s roll out.

A survey conducted among children of public schools prior to and after the twinning experiment revealed some interesting observations.  Prior to the programme, majority of children aspired to be teachers, Policemen or secure a Government job when they grew up. At the end of six months, aspirations had widened in scope to becoming engineers, doctors, pilots, IT professionals and the like.

Many had created their own individual e-mail IDs and were also accessing the internet for more information on word meanings, careers and opportunities.

Teachers of public schools too were eager to improve their own language competencies, computer and life skills.  This ensured a greater level of enthusiasm and participation.

Children and teachers were using more English words while conversing among their friends and appeared more confident to express themselves.

On the part of the private school children, they were far more conscious of their good fortune of being born to parents who could afford better schools and greater comforts.

We found a bond developing between kids between the schools and hopefully this friendship will last long after the structured programme is over.

When this experiment drew the attention of the media, more schools expressed a desire to be a part of the programme. Prior to the lockdown and closure of schools on account of the pandemic, De Paul School was in early stage of visits to Vontikoppal Government School and Kautilya Vidyalaya was evaluating a partner public school.   Request from other schools have been put on hold till schools reopen in Mysuru.

Pratham Mysore will be happy to share its learnings with any authority that wishes to develop and introduce the programme to other schools across the country.

The beneficiaries of this programme were not just the students of the ‘public school’ involved, but the student-volunteers from our school as well. I interacted with some of our students and I could feel that they developed a better sense of social sensitivity and responsibility, something missing from the children from ‘privileged backgrounds’ these days. They also seemed very happy and proud to be ‘volunteers for a noble cause.’ — K.G. Mathew, Principal,  Excel Public School, Mysuru