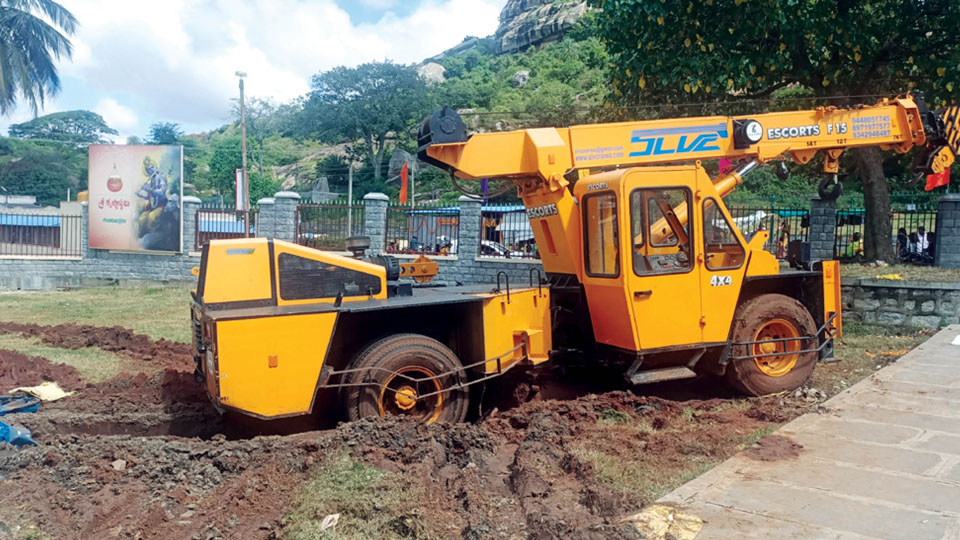 Melukote: Commissioner of Department of Archaeology, Museums and Heritage B.R. Poornima has banned shooting of films at all sites of historical, religious and archaeological importance at the temple town of Melukote. The order was issued following complaints of vandalism, polluting of a temple Kalyani by a Telugu film shooting unit at Melukote yesterday.

Permission was given to the film unit of ‘Bangararaju-2’ a Telugu flick starred by Nagachaitanya to shoot at Melukote by Mandya Deputy Commissioner and the unit from Andhra Pradesh was shooting at the Kalyani for two days.

Yesterday, local villagers, environmentalists and heritage lovers complained that the film crew was polluting the Kalyani water by mixing some colours and also had painted the steps, vandalising the premises. As the steps were defaced, they lost originality.

Also, a crane was used against rules to shoot in the Kalyani and the heavy duty crane got stuck in the slush at a place that was reserved to grow a garden and landscaping, endangering the monument. Due to incessant rains, the crane sank and the personnel had to struggle to move it.

No permission for crane

Though permission was granted to shoot the movie after taking a deposit from the crew, there was no permission for deployment or use of heavy duty equipment and machinery including cranes that could damage the monument.

As soon as the vandalism news spread, Commissioner Poornima sent officers to the place and seeing the extent of the damage caused, the officer decided to ban all kinds of shooting at Melukote to protect the sanctity of the place. Also, the deposit collected from the film crew would be forfeited to recover the damage, she said in the order.

Melukote is full of monuments from Hoysala, Vijayanagar and Wadiyar period. The Kalyani is the biggest of the tanks and it was in a dilapidated state. It was recently restored with funding from Infosys Foundation and Chairperson Sudha Murty had taken personal interest in restoring the Kalyani.

There are two Kalyanis here called the ‘Akka-thangi kola’. While the water in the ‘Akka kola’ is unfit for human consumption, it is for the first time, the ‘thangi kola’ has been polluted by the film crew as they added colours to the water, said local villagers. This water is considered holy by the believers.

Melukote, about 40 km from Mysuru, is ringed by hillocks full of thick greenery. The Cauvery flows nearby. It had the perfect setting for Rajnikanth’s judgment scene in ‘Padayappa’ and the overcast horizons in ‘Barso Re, Megha Megha’ song from ‘Guru’ featuring Aishwarya Rai. It is a popular shooting locale for many Kannada, Tamil and Telugu movies.

Villagers have often complained that certain film units light fires and cook food. They simply throw away the leftovers, paper plates, polythene covers and other waste. “I have raised the issue many times with the Department of Archaeology, Museums and Heritage. I am glad that the ban has been enforced and this will protect the monuments from destruction,” said Santhosh Koulagi, an environmental activist of Melukote, who runs Janapada Seva Trust there.