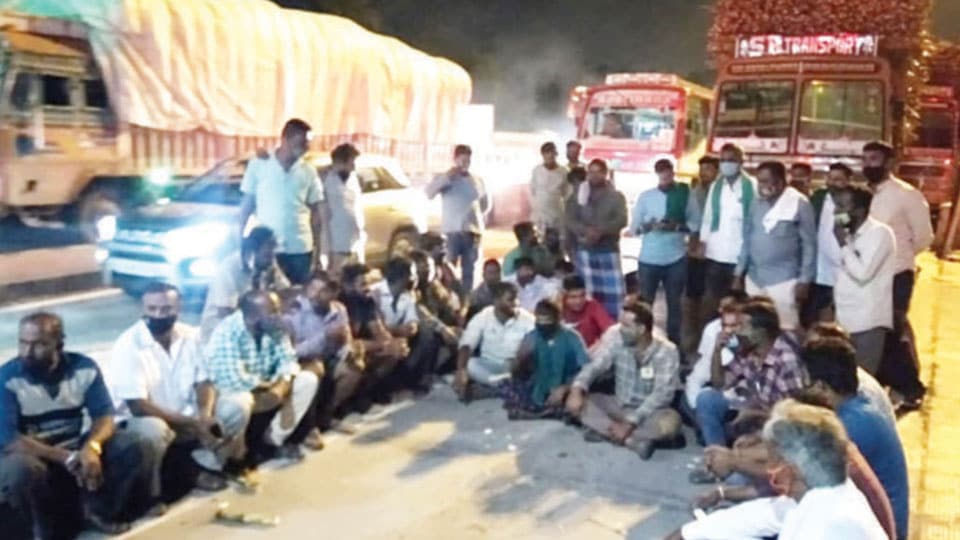 Following assurance from National Highways Authority of India (NHAI) Project Director Sridhar, that a discount toll fee of Rs. 40 would be charged for a sugarcane-laden truck and no toll would be collected for empty trucks, the protestors withdrew the stir at about 11.45 pm.

Following the sudden protest, traffic on the Highway was disrupted till the protest was withdrawn. Meanwhile, Rajashekar alleged that no toll fee was being collected from trucks transporting agriculture produce at any Toll Plaza in the State except at Kadakola Toll Plaza on Mysuru-Nanjangud Road and added that the toll fee of Rs. 80 per truck should be paid by the farmers, who are already suffering due to late payment from sugar factories and questioned, how can the farmers pay the toll when they have already suffered losses due to COVID-19 pandemic.

Meanwhile, NHAI Project Director Sridhar, who arrived at the spot, told the protesting truck drivers that as per the Central Government directive, vehicles transporting agriculture produces should pay the toll fee and also told them toll fee collection would be stopped if they get a letter from the Deputy Commissioner. But the protestors, who opposed it, continued the protest.

Rajashekar, speaking to Star of Mysore, said that they have been submitting memorandums to the Deputy Commissioner (DC) since four months urging for toll relaxation for sugarcane transporting trucks and said that as the DCs are changing frequently, they were yet to receive the letter. We will not pay the toll fee, he added. Finally, after NHAI Project Director fixed a toll fee of Rs. 40 per truck and no toll for empty trucks, the protest was withdrawn at 11.45 pm, Rajashekar said.