Home » Columns » Abracadabra By K. B. Ganapathy » Some parallel to Trump’s America and Modi’s India 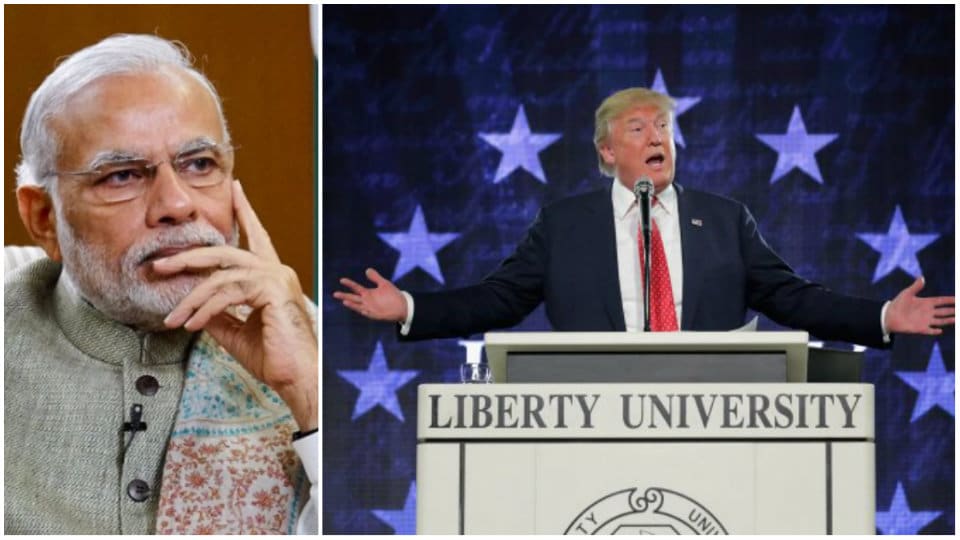 Some parallel to Trump’s America and Modi’s India

I was watching live US President Donald Trump’s  Commencement Speech at Liberty University yesterday (Saturday). Like in our Universities, specially in Jawaharlal Nehru University (JNU), Delhi, there was a division among students on the question of inviting Trump. After all Trump had been the convocation speaker at the Christian University in 2012 and again before the election in 2016. So why again?

The problem for Trump was that America (US) is a Secular country, therefore, how can he as the President associate himself with an evangelical University? Good question. But political one like in India.

By inference Trump considered himself, looking at the critics, as an “outsider” at the White House as a President drawing a parallel to the Liberty University’s evangelical character which too is considered by the “secularists” as an “outsider”. Just as in India during the long, long years of Congress rule, appeasing the minorities no end, when others of the majority were considered “outsiders”. In fact a friend told me that for long, in India the minority has been behaving and asserting itself as a majority, which is in consonance with the two neighbouring countries that took birth following India’s division on the basis of religion.

And in the speech Donald Trump paid compliments to his critics, though in reality it was nuanced condemnation of his critics. “No one has ever achieved anything significant without a chorus of critics explaining why it can’t be done. Nothing is easier or more pathetic than being a critic. There are people who can’t get the job done,” Trump said. By inference, he says these are the eternal critics.

Trump, continues, “… but the future belongs to the dreamers, not the critics, the people who follow their heart no matter what the critics say…”

The tone and tenor of Donald Trump’s speech seemed to say to the world, ‘look America is a Christian country and because of the goodness of Christian religion we have declared ourselves a Secular country to embrace our brothers belonging  to the minority.’ I figure the BJP too seems to speak the same language as Trump.

He continued saying that America was founded “with deep faith, big dreams and humble beginnings. Nobody is going to stop you from practicing your faith or preaching what is in your heart”. Nobody in the University ever preached hatred or violence for the reason of assumed victimhood as we see today in certain parts of the world. It is not surprising, therefore, the President of the Liberty University Jerry Falwell Jr. openly declared in his address, “that  Trump’s Presidency has benefited the Christian community in the US”. So Donald Trump has become the defender of Christian faith in US. Just as the King of England Henry VIII, who was given the title “Defender of faith” by the Pope for writing a pamphlet against protestants. Can we draw a parallel here and say that Prime Minister Narendra Modi is the defender of Hindu faith?

Another significant statement of Trump which, I guess, has significant allusion to our pseudo intellectuals of the JNU kind and left of centre thinkers is: “In my short time in Washington, I have seen first hand how the system is broken. A small group of failed voices, who think they know everything and understand everyone, wants to tell everybody else how to live and what to do and how to think. But you are not going to let these failed voices tell you what you should believe”. This when you know that you are right.

“In America we don’t worship government, we worship God”, said Trump. Then he spoke of how the President of America takes oath in the name of God, not in the name of the Constitution. A very important point.

All said and done man seems to be the highly manipulative creature God has created. In our country too we have seen some segments of our people bragging often times their allegiance to our Constitution demanding “abide by the Constitution” whenever it suits their purpose. Similarly they will assert their faith and belief in their Holy book whenever it helps them to achieve their objective. At present, take the case of the question of Talaq, a Muslim practice, of which our Supreme Court is seized of. Or take the example of Hindu cow vigilantes.

Though India was divided on the basis of religion between Muslims and non-Muslims, while India remained a republic with its inherent character of secularism, the other part, Pakistan though remained secular in the beginning under its founder Muhammad Ali Jinnah, soon after he was gone it has become a Muslim theocratic country with the pernicious  blasphemy law in place which hangs over the heads of the minorities in Pakistan like the Damocles sword. Let it be.