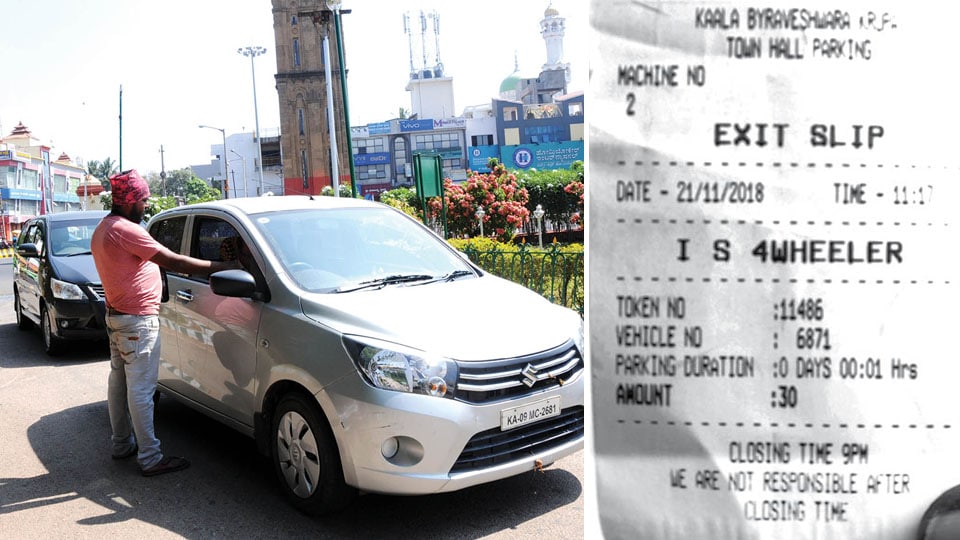 Mysuru: Four- wheeler owners are being forced to shell out Rs.30 to park at multi-level pay-and-park facility at Town Hall. Reason: The person who has bagged the parking contract wants to recover the tender costs as limited number of vehicles came to park during Dasara and also pay  his employees!

Yes. Even if you park your four-wheeler at the facility for five to 10 minutes, you will have to pay Rs.30, the amount that is charged by some shopping malls in city. The parking ticket mentions that Rs.30 is for one hour. The ticket, is however, taken back once the vehicle leaves the Town Hall.

While the Mysuru City Corporation (MCC) has stated in the past that malls cannot charge a basement parking fee, it is turning a blind eye to the “fleecing” of vehicles at Town Hall.

The MCC had opened the Town Hall parking for Dasara and the decision provided a relief to many commuters who were otherwise struggling to park their vehicles in the Central Business District in the absence of parking on the main roads that are usually occupied by shopkeepers and shoppers.

While opening the facility, the MCC authorities had said that a nominal fee of Rs. 10 for cars and Rs. 5 for two-wheelers would be charged and there is no restriction on time. That means, cars could be parked for the whole day and still pay Rs. 10. The contract of maintaining the parking lot has been awarded to one Manu from Mysuru.

The Town Hall can accommodate over 600 four-wheelers and over 1,000 two-wheelers and the MCC had opened the facility with a main intention of easing traffic congestion and parking hassles in the central area where people come to witness Dasara.

But now after Dasara, the parking contractor is charging Rs. 30 for four wheelers. The parking facility is open from 10 am to 9 pm. When Star of Mysore questioned one of the parking attendants there he said that only inter-state vehicles are being charged Rs. 30 while Karnataka-registered vehicles had to pay only Rs. 10.

But a reality check by SOM told a different story as all the four wheelers were asked to pay Rs. 30. When asked about this, the parking attendant said, “Due to a series of one-ways during Dasara many vehicles did not come to Town Hall parking facility. Our boss has asked us to levy Rs. 30 to recover the tender costs. Also, the salaries of three to four parking attendants have to be paid,” he said.

This Rs. 30 charge has not gone down well with the public who said that the contractor was fleecing the commuters. “This is the reason why the area is still crowded. Most people who come to the area early in the morning park their vehicles by the side of the road and under trees. The MCC should reduce the parking charge from Rs. 30 to Rs. 10 for four-wheelers (as promised by MCC earlier) and ban all parking on the roadsides,” said a vehicle owner.

ACTION WILL BE TAKEN

SOM contacted MCC Commissioner K.H. Jagadeesha on the parking lot issue and he said that Assistant Commissioner Sunil Babu was dealing with the issue. “If the parking contractor is charging Rs.30 to recover his tender costs then we will take action against him. We will visit the place tomorrow,” he added.

When asked about the parking tender amount, the officer said that he has to go back to the files to check it. “Today is a closed holiday and will give you the details tomorrow,” he said.