Home » Feature Articles » ‘People think water is dangerous, this mindset has to change’ 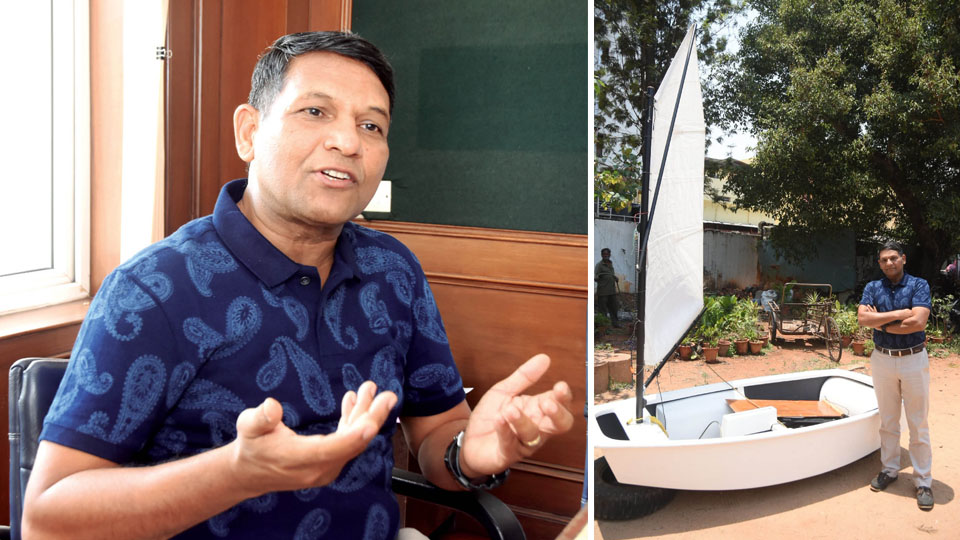 ‘People think water is dangerous, this mindset has to change’

From commanding a ship of Indian Navy to running major Naval water sports facilities and sailing training, Captain Tribhuwan Jaiswal (retd.) has been a qualified National Race official and with his vast experience, he has executed International and National events in Sailing and Power Boat Racing.

As a former Director (Training) with the Yachting Association of India (YAI), Capt. Jaiswal has worked extensively as an Adviser to various Government Authorities as well as private organisations on issues pertaining to Water Sports.

Star of Mysore (SOM) met Captain Tribhuwan Jaiswal, who was in city to promote the National Junior Ranking event-2022 which will be held from July 29 to Aug. 4 at KRS backwaters and spoke to him about Sailing sport and its popularity in India.

SOM: From commanding Navy ships to sailing and power boat racing, what made you take up sailing as a sport?

Captain Tribhuwan Jaiswal: As a mariner (sailor), I had an affinity to water. Moreover, sailing is a part and parcel of Navy life. Every Naval Station has many units and sailing clubs. Hence, I got into sailing.

SOM: Why Mysuru was chosen to host the National Junior Ranking events?

Captain Tribhuwan Jaiswal: Last year, the Royal Mysore Sailing Club (RMSC) conducted the Sailing Championship for the first time in KRS backwaters for which Mysuru played a perfect host. The response was very good and even parents had brought their children to witness sailing. Based on their vision and success, it was decided to host the event in Mysuru, though it is a new venue.

SOM: Sailing as a sport then and now?

Captain Tribhuwan Jaiswal: Earlier, sailing was restricted to the Armed Forces and was also seen as an elitist sport. Today, there are more than 1,500 children sailing in various clubs and the number of sailors has also increased. There were three entries from India to the 2020 Tokyo Olympics. The sport is slowly picking up in India.

SOM: Is there enough awareness created about sailing as a sport in the country?

Captain Tribhuwan Jaiswal: Though awareness has been created about the spot, more awareness should be created as the biggest challenge being faced is to tell people about sailing. In this context, social media is playing an important role in creating awareness. Other media — electronic and print media — should also promote this sport as being done to other sports such as cricket etc.

More than 5,000 people have climbed the Mount Everest and this has been covered by the media. But only 170 sailors have done solo circumference navigation around the globe, which not many know. Good coverage in the form of news will definitely help create awareness about sailing.

SOM: Sailing is known as the sport of the wealthy. Do you think youths will come forward to take up this costly sport?

Captain Tribhuwan Jaiswal: Of course, sailing equipment is costly. Every sailor need not purchase a boat. If they get enrolled to a sailing club, the club provides them boat and also takes care of their safety. A group of sailors can also purchase a boat and share it on time basis. Water is available freely and permission has to be given by the Government. The Government has a major role to play to attract youths to this sport by easing certain norms.

SOM: We see only people from the Navy or Army taking part in this sailing. Why?

Captain Tribhuwan Jaiswal: That was a scene earlier. Over a period of time, participation in sailing events has changed. Now there is 60 percent Defence and 40 percent civil participation. More civilians are taking part in sailing as a sport now.

SOM: Though India is covered with water on its three sides, this sport is not so popular in the country. Why?

Captain Tribhuwan Jaiswal: Delay in getting permission from the Government, no efforts taken to create awareness among interested people and moreover, people think water is very dangerous, hence this sport is not so popular. If all these issues are taken care, people change the way they think of water and if facilities along with safety issues are created, this sport can be popularised.