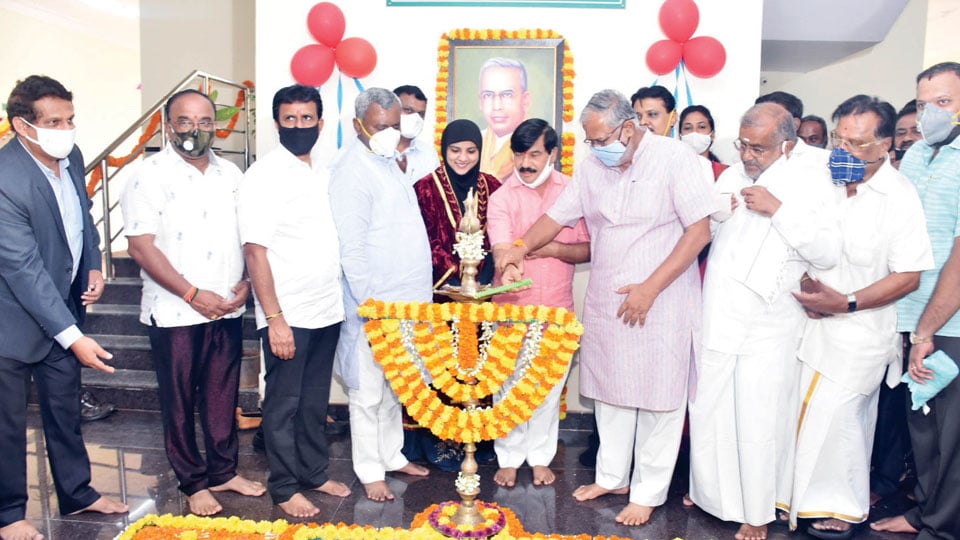 Although the authorities had erected a stage for inauguration, no stage programme happened as the Ministers were reportedly in a hurry to attend other schedules. However, Ministers Somashekar and Suresh Kumar spoke to media persons after inauguration at People’s Park entry gate before leaving the venue.

The new library building has a long history extending over four decades. The then Maharaja of Mysore Nalwadi Krishnaraja Wadiyar constructed the City Central Library on Sayyaji Rao Road in 1915, when the city population was just 40,000. But as a more spacious building was required in accordance with the growth of population, the then Mysore City Municipality  on Oct. 9,1979, handed over 400’x340’ area of land in People’s Park to the Libraries Department for the construction of new building, following which tenders were invited on Jan. 6, 1982. However,  the construction did not commence for some reasons. Later, Dr. M. Veerappa Moily, who was the Education Minister then, laid the foundation stone for the new building on June 20, 1991. But the construction again hit a roadblock due to issues concerning handing over the construction to private contractors. Thereafter the project went into a limbo.

But the project got a push when Vasu became Chamaraja MLA in 2013 Assembly polls. Vasu as an MLA, along with his then fellow MLA S. Suresh Kumar, who is now Primary Education Minister, brought to the notice of the Legislative Assembly Appeals Committee in Mar. 2014 on the New Library building not taking off despite being allotted a vast area of land in the heart of the city. Vasu had suggested the Committee to construct a modern building with all necessary infrastructure and a Digital Library for students appearing for Civil Services and other such competitive exams.

4 COMMENTS ON THIS POST To “People’s Park Library inaugurated”