He was an eminent Sanskrit Scholar, Philosopher and authority on Indian Aesthetics. Samskruta Sevadhurina Mysore Hiriyanna was the very embodiment of simplicity and humility. His philosophy lectures in the classrooms at Maharaja College, Mysore, later became a best-seller in the West under the title “Outlines of Indian Philosophy”!  Sarvepalli Radhakrishnan visited Hiriyanna at his residence on Diwan’s road for advice and pointers on Philosophical matters of importance. Now read on…

Mysore Hiriyanna was born on 7th May 1871 in Mysore to parents Nanjundaiah and Lakshmidevi.  They belonged to the ‘Uluchukamma’ sub-sect of Brahmins — a community which included the likes of Vidyaranya who founded the Vijayanagar Empire. They hailed from the hamlet of Barigehalli in Tumkur district. Hiriyanna was the sixth child and his younger brother was M. N. Krishna Rao — who would later become acting Diwan of Mysore (1941).

Hiriyanna was educated in Sanskrit under the tutelage of Perisamy Tirumalacharya (Founder of Sadvidya Patashala) and Kashi Sesharamasastry. He completed his B.A. and M.A. at Madras Christian College, Madras.

Hiriyanna married Lakshmi-devamma at a young age and the couple had one daughter — Rukamma. Hiriyanna started work as a Librarian at Oriental Research Institute (ORI), Mysore in 1891. Here, he took up the work of curating about 1,653 printed works and 1,358 manuscripts (Kannada and Sanskrit). He then took up a government job in the Education Department at Bangalore and served for three years. He always nursed an ambition to ‘teach’ and secured an L.T. Qualification from Teacher’s College, Saidapet in this regard. He came back to Mysore and joined ‘Government Normal School’ as a teacher in 1896. He eventually became Head Master by 1907. Here, he penned his first book in Kannada titled “Bodhana Krama” on the ‘Art of teaching.’ He joined Maharaja College as a Lecturer in Sanskrit in 1912. T. Denham was the Principal of Maharaja College during this time and was succeeded later by B.M. Srikantayya. Denham, Srikantayya and H.J. Babha were all amply aware of Hiriyanna’s scholarship and considered him an asset. In fact, Hiriyanna’s reputation as a great scholar and teacher led H. V. Nanjundaiah (the first Vice-Chancellor of the University of Mysore) to appoint him as a Lecturer. Two years later, he became an Assistant Professor. Hiriyanna was a successor to such Sanskrit scholars as Perisamy Tirumalacharya, Asthan Vidwan Kaviratna Mandikallu Ramasastri, Kasturi Ranga  Iyengar and Ventakarama Sastri.

In 1919, Hiriyanna was appointed as a Professor of Sanskrit. After an illustrious teaching career spanning two decades, Hiriyanna retired from the University in 1927 at the age of 56 years.

He received a number of invitations from Universities across the country to come and teach. He declined every one of these requests. He was content to delve deep into his studies spending his time at the house he had built on Diwan’s road (House No. 962) in Mysore in 1910. In 1935, he was Chairperson of the All India Oriental Conference at Mysore. In 1939, he was requested to chair the All India Philosophy Conference at Hyderabad. In 1940, he was invited to deliver the prestigious “Miller’s Memorial Lecture” on Philosophy at Madras University. Surprisingly, Hiriyanna accepted this offer and graced the occasion — probably the only instance when he left Mysore to attend an event elsewhere! He was also honoured with the title of “Samskruta Sevadhurina” by the Madras Sanskrit Academy. 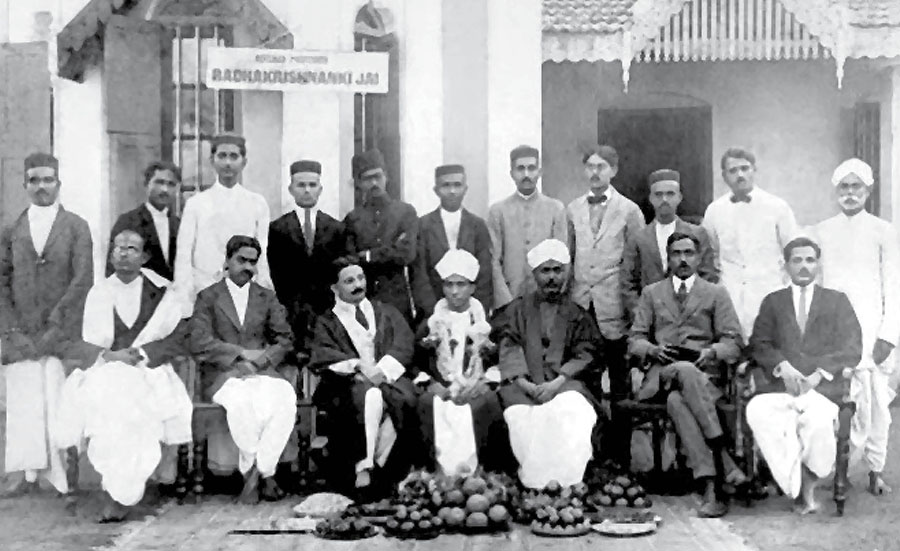 Prof. M. Hiriyanna (sitting third from right) with S. Radhakrishnan and A. R. Wadia at Radhakrishnan’s farewell from UoM.

Hiriyanna always kept to himself. He was charitable and helped many poor students with the condition that they should never reveal his name! He was a traditional Sanskrit scholar by training but a Philosopher who had an in-depth knowledge of both Eastern and Western Philosophies. His love of English Literature was well-known. He regularly read the “Times Literary Supplement” and “Illustrated London News.” During the last decade of his life, he visited the house of Palghat Narayana Sastri with whom he would discuss for hours the finer aspects of Indian Philosophy, Vedanta and the Upanishads.

He was a close friend of Kuppuswami Sastry, a Sanskrit Professor of eminence at Madras University. Incidentally, much of Hiriyanna’s library would eventually be donated to the “Kuppuswami Research Institute” at Mylapore. Hiriyanna authored nearly twenty works. Some of the notable ones are “Outlines of Indian Philosophy” (1932), “Essentials of Indian Philosophy” (1949), “The Quest for Perfection” (1952) and “Art Experience” (1954).

After a brief period of illness, Hiriyanna passed away aged 79 years, on Sept. 19, 1950. In 1972, to mark his birth centenary (1871-1971), a commemoration volume was published by a committee, which included Prof. V. Sitaramayya, Pu. Ti. Narasimhachar, Prof. N.A. Nikam and G. Marulasiddaiah. This Commemoration Volume was released by the then Governor of Karnataka Mohanlal Sukhadia.

In the world of Indian Philosophical Studies, Hiri-yanna’s name stands tall. His unassuming demeanour, simplicity and down to earth personality masked a gigantic intellect. Kalidasa provides a parallel in “Raghuvamsa” when he says “Speak less for the sake of truth” (Satyaya-Mita-bhashinam). Prof. M. Hiriyanna practised silence of this type. 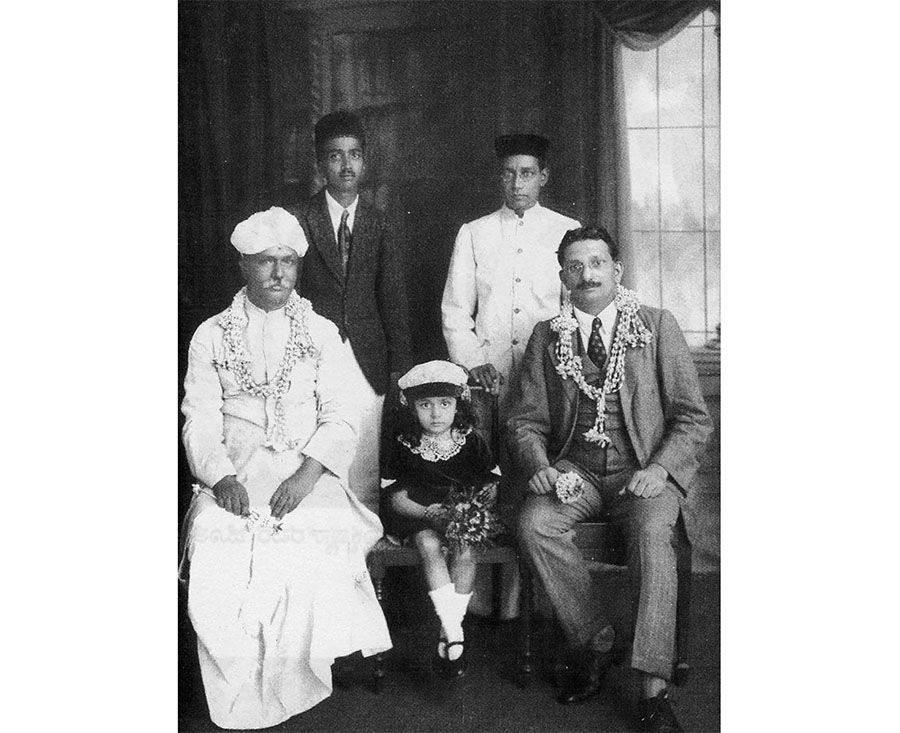 Pu. Ti. Narasimhachar’s observation on Hiriyanna probably sums him up the best:

“Guru Hiriyanna was a Stithapragna in every sense of the term. He exhibited the quality of the well-bred gentlemen — an abhijatapurusa — one who gives his gifts in such a way none except the donor knows it, who knows how to welcome whoever comes to his house and make him comfortable, who is silent about his own good deeds but proclaims unreservedly of favours he has received from others, in whom fortune does not breed arrogance — who is averse to listen to stories about others and who is intensely devoted to learning. To me, Guru Hiriyanna is an ideal Indian, rooted in his own culture; he did not allow Western thought and culture to destroy the identity as an Indian. He digested them and assimilated into his system all the best of the West, its Philosophy and Literature. It is good to remember Prof. Hiriyanna, his life, his scholarship, his unostentatious benevolence, his dignified bearing and his keen sense of honour and independence.”

The Father of Western Philosophy,  Socrates, lived in Athens in 500 B.C.  Like Socrates, Prof. M. Hiriyanna was open-minded, generous, inquisitive and friendly. He often helped students as an unknown benefactor by paying their fees. He kept an open house for students and often discussed philosophical problems, while washing his clothes in the backyard! His motto was “Simple living and high thinking.”

During his lifetime, Hiriyanna came to embody the very essence of Indian Philosophy. He was a living example of the best of Indian values. He achieved both excellence and perfection in his life. He faced courageously the vicissitudes of life and the ups and downs of it. These did not deter his spirit from enjoying what may best be described as an “élan vital” (in the words of Henri Bergson).

2 COMMENTS ON THIS POST To “Prof. M. Hiriyanna: The Socrates of Mysore”