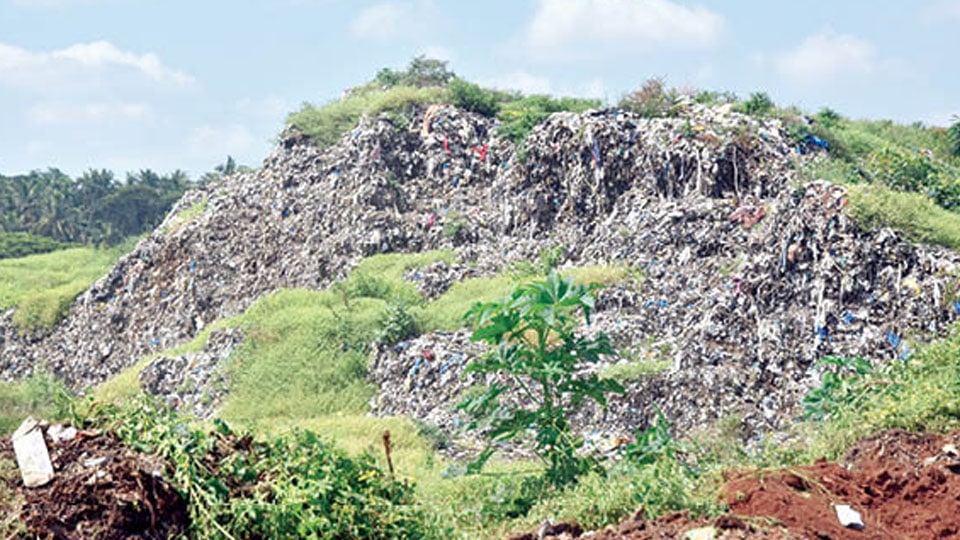 Mysore/Mysuru: The desperate wait of over 50,000 residents living around the Solid Waste Management Unit (Excel Plant) at Sewage Farm premises in Vidyaranyapuram for relief from foul smell has just got longer as the project to clear the legacy waste is stuck in tender quagmire.

The residents are constantly tormented by the stench emanating from more than two lakh tonnes of legacy waste piled up at the unit. After much struggles and protests, the District Administration took a decision in January this year to go ahead with a Bioremediation (Bio-mining) project to clear the legacy waste that has been dumped since over 30 years.

Despite the efforts by the District Administration, the Bioremediation has failed to take off even after eight months of its planning as there is a delay in calling of tenders. The project has hit a roadblock due to an issue pertaining to awarding the project contract as a single tender. The outbreak of COVID-19 pandemic has only added to the delay.

Living in the surroundings of Excel Plant has become a horrible experience for thousands of residents with undesirable smell stench emanating out of the plant 24×7. Residents of Vidyaranyapuram, Kanakagiri, J.P. Nagar, Gundu Rao Nagar and Vishveshwaranagar have been demanding the relocation of the plant for years.

The suffering of the residents was brought to limelight when the BJP Government came to power in July last year. The then Mysuru District Minister V. Somanna, MP Pratap Simha and authorities from Mysuru City Corporation decided to implement Bioremediation project as a final solution.

Bioremediation is the best process

The then Deputy Commissioner Abhiram G. Sankar, who had led a seven-member team to Maharashtra’s Nagpur, submitted a report on the waste processing technology adopted by Zigma Company. The team had visited the plant at Bhandewadi village near Nagpur where Bioremediation technology is being used to process 10 lakh tonnes of legacy waste.

He argued that Bioremediation is the best process to clear the waste. Bioremediation is a process of treating contaminated soil and subsurface material, by altering environmental conditions to stimulate growth of micro-organisms and to degrade the target pollutants.

The issue was then brought to the notice of Minister Somanna and S.T. Somashekar who subsequently took over as Mysuru District Minister. A DPR (Detailed Project Report) on the execution of the project in Mysuru was prepared and the MCC Council approved it too. The MCC later sent the DPR to the Government, which accorded sanction for the project.

Agreement with the Nagpur-based company

As per the project details, the Department has to give Rs.18 crore to the Nagpur-based company, out of which MUDA’s contribution will be Rs.5 crore, MCC Rs.3 crore and the rest Rs. 10 crore will be paid by Government.

But even as the MCC was discussing the issue on converting the project as a single tender, the outbreak of COVID-19 pandemic in March impeded the MCC from going ahead with the project, according to an MCC health officer.

Now, Krishnaraja MLA S.A. Ramdas has written to the MCC asking it to stall the tender process and to execute the project in a totally different manner. This has reportedly put brakes on the MCC‘s plans of inviting tenders, sources said.

Speaking to Star of Mysore, MLA Ramdas, acknowledging that he has indeed written the letter, said that the Government has already approved two waste disposal plants at Rayanakere and Kesare for which tenders are yet to be invited. “Once the tender process is complete and the works begin, the legacy waste at Sewage Farm can be shifted to the two plants and the Plant can be shut once all the waste is cleared from there,”  he said.