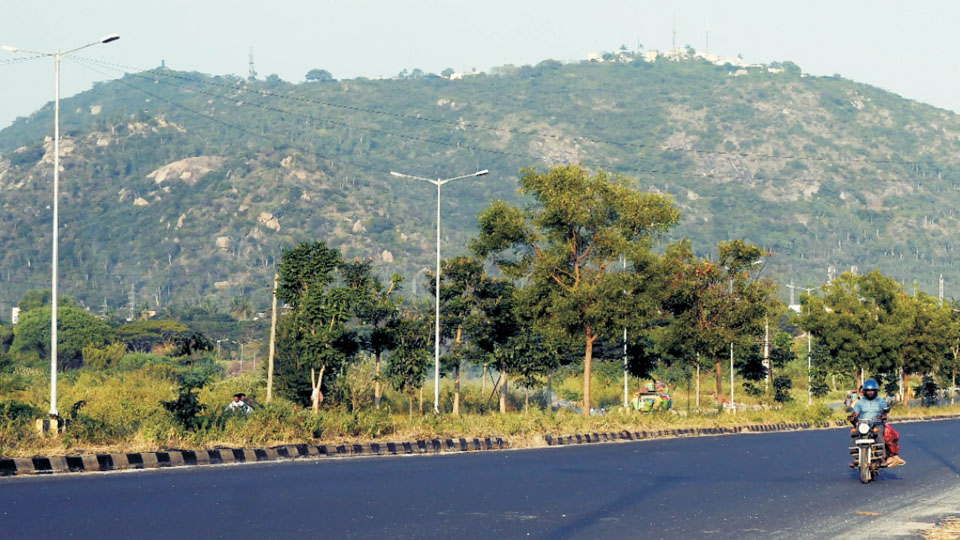 Mysore/Mysuru: Public opinion against the proposed ropeway project on top of Chamundi Hill to attract tourists is slowly building up after the announcement was made in this year’s State Budget. Though there was opposition earlier too for the project, it was in subdued nature as there was no official confirmation though there were talks about it here and there.

Now with the Government going ahead with the project, environment activists  and green groups are coming together to oppose the project in a united manner as according to them, the ropeway will spell doom not only for the fragile ecosystem but also to the residents who are living on Hill top.

A meeting to prepare the protest plan was organised by ‘Chamundi Betta Ulisi Horata Samithi’ (Save Chamundi Hill Action Committee) on Wednesday at Curzon Park where it was decided to seek the support of the villagers living on top of the Hill and also from Mysureans who are closely attached to the city’s environment. The meeting was chaired by senior Kannada writer and folk scholar Prof. Kalegowda Nagavara. Over 50 activists took part and aired their opinions and decided to put up a brave front.

Speakers at the meeting noted that they might have to face extensive criticism from elected representatives of Mysuru region who are in favour of the project.

As a first step, over 50,000 signatures will be collected to exert pressure on the Government to drop the destructive and economically non-viable project. Already, over 40,000 signatures on the request letters against the project have been collected and this signature campaign will be taken forward involving more people.

Not a place for ropeway

Terming the project as environmentally disastrous, activist Leela Venkatesh said that there are many places in Mysuru for tourism development and the Chamundi Hill is the only lung space that provides clean and fresh oxygen to the residents. Also, the Hill is not high and vast to provide a ropeway, she opined, comparing Nandi Hills near Bengaluru that is a befitting place for a ropeway.

Speakers called for filing a case in the High Court against the destruction of Chamundi Hill and the need to mobilise resources for that. Noting that despite opposition from people, projects like shopping complexes, multi-level parking lot and commercial complexes have come up on the Hill in the past, speakers noted that the protest against the ropeway project must be so strong that elected representatives should not be able to bulldoze public opinion.

They noted that a series of landslides on the Chamundi Hill and its impact are warning signs for any destructive project. A ropeway entails building of huge pillars and the activists wondered how pillars would be erected in the wake of landslides and loose soil as reported by experts and geologists. Even if technology is used to erect pillars, these would cause more landslides in the future, said Leela Shivakumar of Parisara Balaga.

P.K. Anil Kumar of Wild Walkers said that the Chamundi Hill supports 246 species of birds, rare fauna including leopards, porcupines, wild boars and civet cats. There are many small mammals and a host of insects that thrive on the ecosystem and the ropeway will destroy their existence. People must be informed about the dangers posed by the project, he opined.

The meeting decided to post online the signature campaigns and the request letters that have been collected against the project to draw the attention of Prime Minister Narendra Modi, CM Basavaraj Bommai, Union Environment Minister and other personalities. A decision was also taken to launch social media campaigns on all platforms so that there is more awareness among people.

It was also decided to take the Mysore royal family into confidence to oppose the project and meetings will be held with Pramoda Devi Wadiyar and Yaduveer Krishnadatta Chamaraja Wadiyar who have been vocal in the past when it came to the question of environment destruction and felling of trees.

ONE COMMENT ON THIS POST To “Proposed ropeway atop Chamundi Hill: Action plan discussed to oppose project”