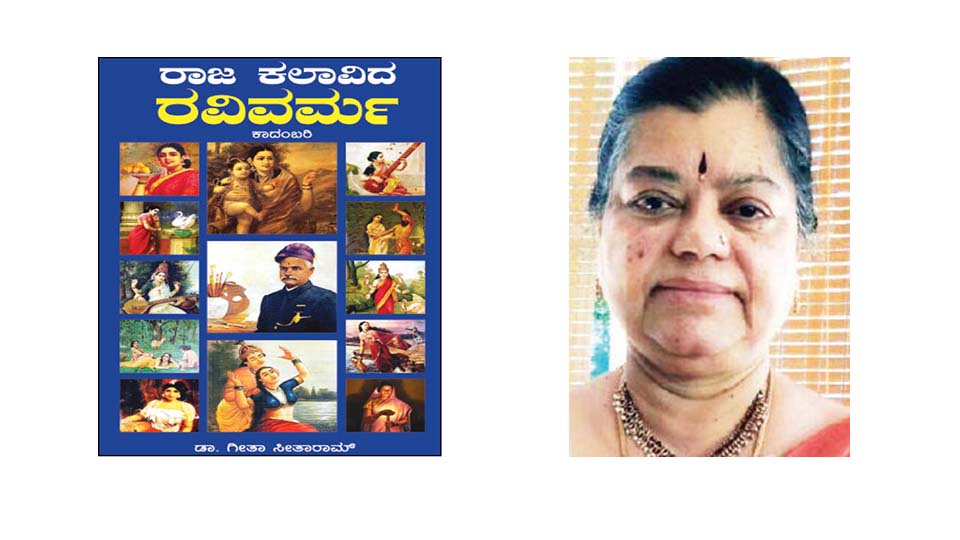 For any average Hindu household, Ravi Varma paintings were not anything unusual. One would have grown up with the paintings of Lakshmi, Saraswati, Yashoda Krishna, Muruga  and visualised these Gods just as seen in the photos bedecking the high walls. Ravi Varma gave a physical form to their names as in puranic descriptions and we believed that’s how they looked.

‘Hamsa Damayanti’, ‘There comes papa’ , ‘Lady with the lamp’, ‘Woman holding a fruit’ kind of  portraits decorated the cosier corners of the house. Though they were all nicely replicated by us during summer holidays,  little did we wonder about the artist behind it.

We knew nothing about the calendars of Gods and other epic characters being almost banned by the orthodox morale holders where the artist was brought to Court to defend his art. First of all there was objection to print and sell God pictures to every home. If that was not enough, some female paintings  were considered  sensuous though the storyline warranted it in its depiction of  ‘purana ‘ like Pururava – Urvashi, Dushyanta – Shakuntala, Aniruddha in Usha’s dream, Arjuna – Subhadra and more. Most of the characters were based on a versatile model Sunanda, who dedicated herself to art creation.

Ravi Varma chose to fight the case all by himself in letter and spirit, not to get cowed down to societal pressures and stand up for the artists. And he did win.

Raja Kalavida Ravivarma is a novel by Dr. Geetha Seetharam in Kannada, that was serialised in Sudha Kannada Weekly two years ago. The preface for the book is aptly written by theatre and TV artist Vidya Murthy. It is a complete life history of a prodigy artist who was not trained formally.

The casts in the novel, come and go theatrically,  give out their soliloquies, reveal innermost feelings and emotions through the passage of time as it progresses and evolves  biographically. Interestingly, it is interspersed with scenarios and episodes of when each of the masterstrokes were created thereby making the paintings contextual.

Ravi Varma (1848-1906) was so passionate about his art that he tried to even  walk out of his newly-wed  regal wife Puratharthi, to mix art colours!   Matriarchal Kerala families bring the sons-in-law home after marriage, unlike daughters  bidding ‘bidayi’. And there begins the trauma for the budding youth artist Ravi Varma. He leaves for his home town when wife questions him about the Nair maid  he chooses for a model to do a painting. He was a listless painter always looking for realism around him.

Later in life, his mentor, the Maharaja Ayilyam Thirunal  recommissioned the incomplete works for a mega show and competition in Madras that won the Governor’s prize,  accolades and the world took notice of his painting series of the Nair damsels.

Apart from a catelogue of photographs of paintings,  the author gives out the interesting footnote facts here and there. Like the ‘names of royalty’  which is simply named after their birth star, like Ayilyam or Vishakha. We are more familiar with the name Maharaja Swathi Thirunal, who is born in Swathi nakshatram.

A bit of chronological  emphasis  and a flow chart would have added value, as the characters of the novel overlap with the historic events. Maharajas of that period across India have  commissioned Raja Ravi Varma to do their Royal ensemble of portraits. Also,  in the same period, Swami Vivekananda witnessed Ravi Varma’s award-winning portraits in Chicago and comes down to meet him in Bombay. A historical meeting where a brief sketch of Swami was also done during the short visit. However, this collector’s book is for keepsake.

READ ALSO  Challenges of a Tropical Forester, near death encounters with wildlife

4 COMMENTS ON THIS POST To “Raja Kalavida Ravivarma: Life history of a prodigy artist”