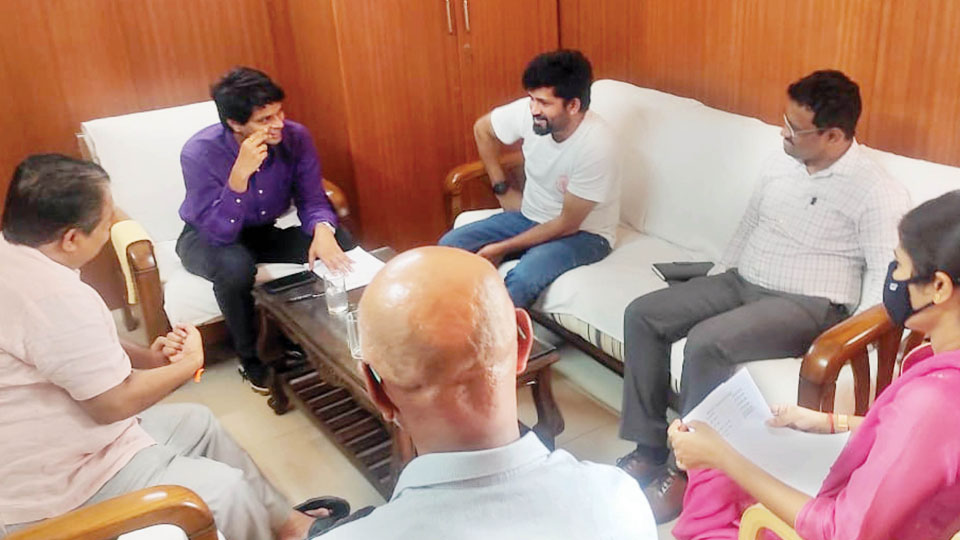 Mysore/Mysuru: Increased crime rate, accidents, repeated complaints by residents and commuters and fervent appeals by the Police have forced the Mysuru Urban Development Authority (MUDA) and the Mysuru City Corporation (MCC) to come up with a plan of action to keep the streetlights on the Ring Road glowing every night, 365 days.

Every year, just days after Dasara, street lights along the six-lane Outer Ring Road (ORR) are switched off, plunging the 42-km-long carriageway into darkness, endangering the safety of people using the motorway and residents of layouts beyond the road.

For Dasara, usually the District Minister decides that both MUDA and MCC will foot the bill at the rate of 50:50 ratio. Whenever the lights are off, the Ministers, elected representatives and officers face intense public criticism and embarrassment.

Now after years of switching the responsibility on each other, the MCC and MUDA have come to an understanding that the MUDA will pay the MCC Rs. 12 crore to replace the bulbs, rodent-eaten wires and other cabling works.

After the lights are restored, the MCC will maintain the light poles and also pay the electricity bills.

This consensus was arrived at a meeting of Mysuru-Kodagu MP Pratap Simha, MUDA Chairman H.V. Rajeev, MCC Commissioner G. Lakshmikantha Reddy, MUDA Commissioner Dr. D.B. Natesh and other officers. The meeting was held yesterday and the Rs. 12 crore will be allocated to the MCC in the MUDA Budget.

Speaking to SOM, Lakshmikantha Reddy said that this was a long-pending issue which has seen a feasible solution. “Tenders will be called for repairs of street lights within a week and work will start as soon as the tenders are finalised,” he said.

In all, the MCC will have to procure 4,270 LED bulbs on 2,135 poles. “At some places, the two sides of the poles have bulbs and they will need 120-watt bulbs and the single light poles need 90-watt bulbs. The MCC will maintain the lights and also pay the electricity bills to CESC. It will be burdensome for MCC but we will maintain and foot the bill in the public interest,” Lakshmikantha Reddy said.

According to MUDA Chairman Rajeev, the meeting reached a consensus after discussing benefits and drawbacks. “More than anything, public safety is paramount and the Ring Road is infamous for crime and accidents. The city is growing by the day and it has already expanded many kilometres beyond Ring Road,” he noted. The provision to hand over Rs. 12 crore to the MCC will be made in the MUDA Budget and after the money is paid, the onus of glowing lights is of the MCC, he added.