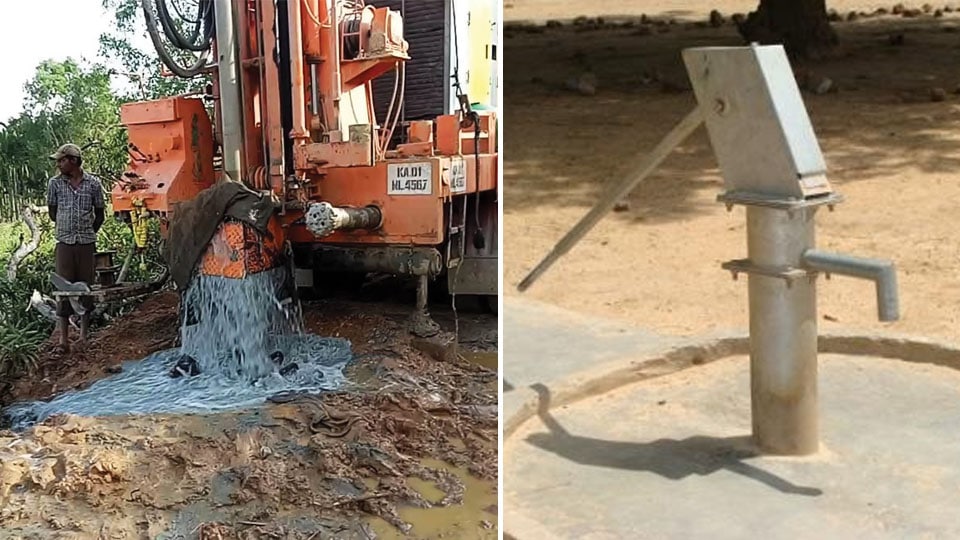 An international workshop on water management was held at JSS Academy of Higher Education and Research in Mysuru recently. Here we publish an article by V. Mahesha, retired Hydro Geologist, Mysuru, to share some of his thoughts and solutions to the existing water crisis throughout the State. Now read on. — Ed

Cause and Effect: Borewells as a source of water for potable and irrigation uses in the hard rocks of Deccan plateau was first experimentally tried and confirmed in the late 1970s in Karnataka. It was like opening a free treasure for the people till then suffering by acute scarcity of even drinking water especially in the rain-dependant areas, with only shallow dug wells 10 mtrs to 15 mtrs depth. Small ponds and step wells that existed in almost every village were more a source of diseases. The ground water stored deep underground in the tight fracture system came as a boon to public health system.

Once the borewells were recognised as incessant source of water, everybody wanted a borewell in their lands (plots) and this resulted in drilling more than forty lakh borewells during these fifty years in Karnataka. What started as a source to be tapped in acute water scarcity conditions through shallow borewells of 40 to 60 meters has in course of time gone to depths of 300 meters to 500 meters and more.

The specific capacity of hard rocks of  Karnataka is about 2% or less and ground water was flowing since millions of years through a definite and defined tight fracture system. The borewells disturbed this system as they pierced through the wet and dry fracture and joint system and interconnected them causing far reaching multi-dimensional negative effects on the water resources as a whole, as follows:

1. Prior to borewells, the static water level on an average ranged between 3 and 10 meters and the dug wells were taken into soil and weathered upper zone. The rains used to top up this every year and the water seeping underground during rainy season maintained the effluent character into the streams in the upper reaches of the basin and in the rivers downstream in most of the watersheds and river basins. The arrival of borewells not only increased the use of ground water from less than 5% to 10% of annual recharge to more than 80% to 100%, depending upon the density and depth of borewells and the geomorphologic conditions of individual areas.

3. The effluent character of the groundwater started diminishing. The small streams started going dry followed by major streams and even the so-called live rivers during summer.

4. Thousands of minor irrigation tanks and ponds which were in use for centuries stopped receiving water and went dry, causing unprecedented hardship to livestock and even human habitations.

5. Shallow rooted vegetation dried up in thousands for want of water in the soils and weathered zone.

6. The borewells became vertical conduits for the free flow of rainwater at depth. The increase in usage of groundwater increased the solution activity of water passing through different types of rocks and soils, and rendered them unfit for especially portable purposes. The very idea with which the borewells was started, that is, to provide safe drinking water to people, turned out to become negative with increase in TDS and harmful mineral constituents.

8. Millions of borewells constructed so far have also been acting as incessant steaming pipes of water from the underground into the atmosphere.

9. The situation has become explosive.

Hard and harsh decisions are necessary to contain and prevent further damage to the water cycle and the life as a whole.

a. First and foremost is to ban construction of new borewells in the State as a whole and especially in the areas already identified as critical or semi-critical.

b. All the borewells which are not in use should be filled with mud, gravel, etc. to prevent them from acting as free conduits of waste. In areas where they could be used as rainwater recharged structures, it should be on scientific basis with sufficient precautions.

c. The rainwater conservation should be implemented in all the river basins on water shed basis. The recharged structures should be site-specific, from the initial catchment zone so that not even a drop of rainwater goes waste. It should become a top priority issue.

d. Nearly 40,000 tanks and ponds constructed since centuries in this State should be de-silted and rejuvenated, so that they shall become useful and serve the purpose with which they were constructed.

e. Most of the old public drinking water dug wells in the villages have become dry since decades and put to disuse and abuse. They may be used for group roof rainwater harvesting by constructing suitable filtration structures so that they become not only good recharge structures but also sources of good drinking water. Even the old dug wells in the farm sector could be used as rainwater recharge structures on a scientific basis.

It is of utmost importance to address the problem of water scarcity created by borewells on a war-footing, by maybe, a few unpopular harsh decisions listed above. Otherwise, the situation may go out of control soon and there shall be problems of health and scarcity beyond imagination. This water rejuvenation and management should be handled only by subject specialists and with active public participation from grassroot level, so that they shall preserve them with care for the sake of their own offspring of the coming generations.