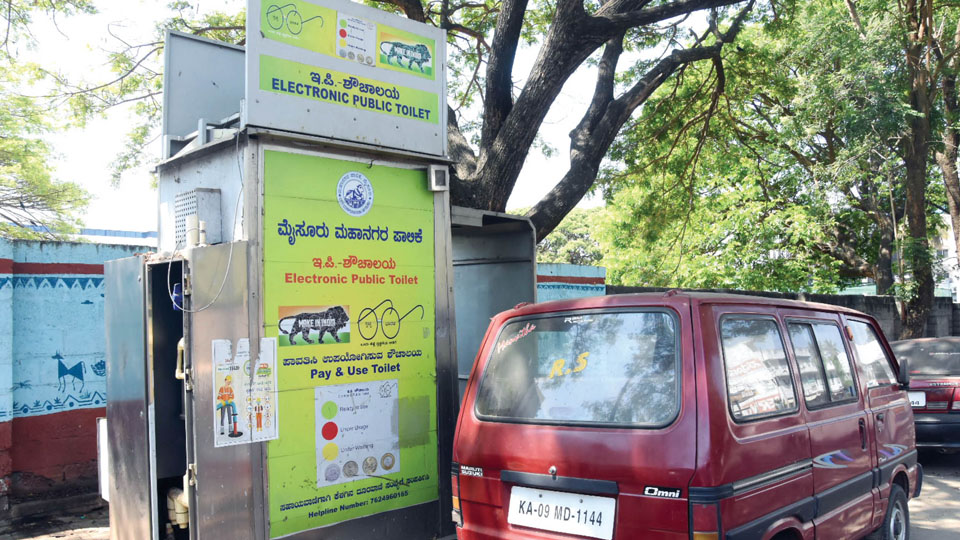 Innovative solutions such as e-toilets (electronic/ eco toilets) installed in Mysuru city have failed to provide the desired results and it is literally money flushed down the toilets. All the e-toilets are rendered useless within a span of four years though they were launched with much fanfare in 2017-2018.

The Mysuru City Corporation (MCC) had constructed 24 e-toilets and Rs. 6.25 lakh was spent on each toilet. The overall cost of installing these portable, eco-friendly and GPRS-enabled hygienically maintained eco-toilets is 1.50 crore, apart from other overhead costs. These toilets functioned for only one year or so.

Initially, people used this toilet out of curiosity and they were impressed with how a toilet functions after inserting Re. 1 or Rs. 2 coins. Later they were scorned and people refused to use them, thanks to the complications in functionality.

People complained that despite inserting coins, the toilet doors do not open and even if the doors open, it stinks and users feel claustrophobic when they go inside. This has ironically forced many people to relieve themselves behind the e-toilets.

In 2017, the MCC made an attempt at a hi-tech solution to an age-old problem of open defecation and urinating by the sides of the roads by introducing e-toilets. A fully automated and GPS-equipped system to prevent misuse, e-toilets seemed the best solution for the menace.

The project was conceived with an aim to address the issues associated with traditional public toilets like non availability of water, power, manpower, lack of maintenance and sustainability. Coin system was adopted so that the users pay and use the facility.

The toilets were constructed by Eram Scientific, a Kerala-based company and it maintained them for a one-year guarantee period. Later, the e-toilets were handed over to the MCC.

These e-toilets used less amount of water and there was a sensor-enabled system to conserve water and electricity usage. The systems were indeed innovative but now everything is in shambles. Initially, people were curious about these blue kiosks and there was a good response. Buoyed by this, the MCC went on to set up 24 e-toilets and spent a fortune.

These e-toilets were an effective step towards the creation of urban sanitation infrastructure and it created a better quality of life for residents and tourists. By combining mechanical, electronics and web-mobile technologies for remote monitoring of the entry, usage, exit, cleaning and sterilisation, these e-toilets offered sustainable sanitation. They also generated revenue. Sadly, they are defunct now.

Only five will be retained: MCC Commissioner

MCC Commissioner G. Lakshmikantha Reddy has clarified that only five e-toilets out of the total 24 will be retained in strategic places and main roads. The rest will be discarded. Many people are not using the e-toilets and the repair costs are exorbitant, he said.

Speaking to Star of Mysore, he said, “Each toilet has been built with Rs. 6.25 lakh and the maintenance cost is burdening the MCC. Many people have complained to us that instead of benefits, there are more disadvantages with these e-toilets and that is why we have decided to discard 19 and retain only five.” Tenders have been called to repair and maintain five e-toilets for one year and the company that has bagged the tender will start work next week, Reddy added.

Where in Mysuru city