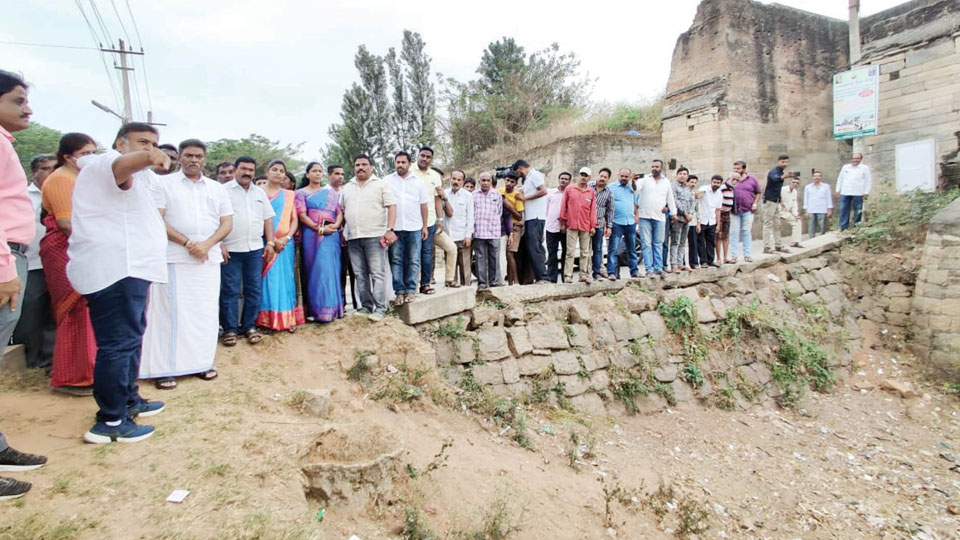 Srirangapatna: Though an important tourist destination and a place of historical significance, Srirangapatna, the fort town on the banks of River Cauvery, which was also the capital of Mysore Wadiyars and the birth place of Mummadi Krishnaraja Wadiyar, has not seen any major development over the years except for some minor repair works during Dasara.

The venue for the Dasara and Vijayadashami procession for more than a hundred years (from 1610 to 1799), Srirangapatna has many credits to its name.

In a ray of hope, the State Government will take up tourism development projects worth Rs. 16.80 crore and the funds will be released through the Tourism Department. On a special visit to Srirangapatna yesterday, Tourism Minister Anand Singh promised a slew of development works. The Minister came to the fort town responding to the request by Srirangapatna MLA Ravindra Srikantaiah and he, along with officials of his Department and the Department of Archaeology and Museums, visited Bengaluru Gate, Srirangapatna Fort, Snana Ghatta, Wellesley Bridge, Delhi Gate, Paschimavahini and surrounding areas.

Disclosing his plans, the Minister said that the places of historical importance in Srirangapatna will be developed in such a scale that tourists can take a 15-day package including Mysuru, Mysore Palace, Chamundi Hill, Bandipur Safari, Kabini Backwaters, Krishna Raja Sagar Dam, Ranganathittu Bird Sanctuary and many historical monuments of Srirangapatna.

However, the fort and the moat have remained neglected. Minister Anand Singh said that a mega plan to rejuvenate the moat — now dominated by illegal structures — will be formulated where the moat will be restored and boating facilities will be introduced to bring alive the history of Srirangapatna.

The Minister was told that elders recount stories of how Hyder Ali and Tipu Sultan had ordered their soldiers to pour boiling castor oil on the heads of the intruders during their attempts to cross the moat. Stories of hundreds of crocodiles thriving in the moat are still alive. Elders say that crocodiles were kept hungry and thereby they are aggressive. As such, no one dared to enter the moat.

Anand Singh said that the Government has already released a grant of Rs. 8 crore to develop the Fort and moat to introduce boating facilities. MLA Ravindra Srikantaiah said that a walkway will be constructed and basic facilities like toilets and changing rooms will be provided to the devotees who come to Snana Ghatta.

Commissioner of Department of Archaeology and Museums B.R. Poornima, Assistant Commissioner Shivanandamurthy, Tahsildar Shwetha N. Ravindra and others were present.