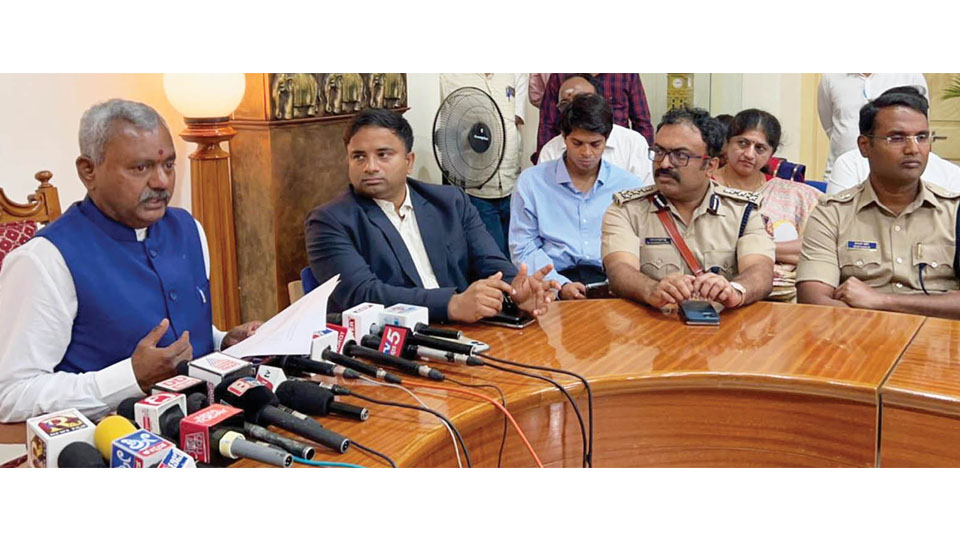 Mysore/Mysuru: In all, Rs. 28,74,49,058 has been spent for a grand Dasara in four districts — Mysuru, Mandya, Chamarajanagar and Hassan — this year out of Rs. 31,08,88,819 received from the State Government and various other sources, said Mysuru District Minister S.T. Somashekar.

“The spectacle was viewed by a maximum number of people in Mysuru and across the world after two years of low-key celebrations,” he told at a press conference at Mysuru Palace Board yesterday.

Giving a break-up of the expenditure, Somashekar said that the lion’s share of Rs. 6.36 crore was spent on Yuva Dasara and Yuva Sambhrama. “As per the accounts submitted by the 21 Dasara Sub-Committees, they incurred an expenditure of Rs. 26,54,49,058. In the same grant, Rs. 2.20 crore was allocated for the celebrations in Mandya, Chamarajanagar and Hassan districts. In all, Rs. 28,74,49,058 was spent on the festivities in four districts, including Rs. 26,54,49,058 for Mysuru Dasara alone.

“In all, Rs. 31,08,88,819 was credited into the account of the Deputy Commissioner, Mysuru towards Dasara celebrations. This included Rs. 15 crore from the Secretary of Department of Kannada and Culture, Rs. 10 crore from Commissioner  of Mysuru Urban Development Authority (MUDA) and Rs. 5 crore from Mysuru Palace Board,”   he said.

As decided in the Dasara High Power Committee, Rs. 1 crore each was given to Chamarajanagar and Mandya (Srirangapatna Dasara) and a sum of Rs. 20 lakh to Sakleshpur in Hassan for Dasara celebrations,” he said. In addition, the Chamundeshwari Electricity Supply Corporation (CESC) has spent Rs. 5.45 crore for illuminating Mysuru for 17 days and this is separate from the main accounts, he added.

Along with the main fund sent by the Government, Rs. 32.5 lakh was received through sponsorship and advertisements and  Rs. 76.38 lakh was gained by selling Gold Cards and tickets. For civil and electrical works, MUDA has spent Rs. 1.8 crore, Public Works Department (PWD) has spent Rs. 1.8 crore and the Mysuru City Corporation (MCC) has spent  Rs.  2.1 crore, he said.

“The Government has given Rs. 47.2 lakh including Rs. 7.2 lakh GST to the member of the erstwhile Mysore royal family Pramoda Devi Wadiyar to conduct private Dasara. Rs. 78.57 lakh was spent by the sub-committee to extend invitations and welcoming guests,” Somashekar said.

An amount of Rs 3.77 crore was spent to transport and stay of VIPs, guests and artistes, Rs. 2.22 crore has been spent on Jumboo Savari procession on Vijayadashami Day and Rs. 1.61 crore was spent on cultural programmes held in front of the Mysore Palace.

The Forest Department incurred an expenditure of Rs. 1.46 crore in taking care of Dasara elephants and their handlers for two months, Rs. 1.17 crore was spent on the conduct of torchlight parade, as per the list provided to the media by the Minister.

The Minister said that he has asked the Deputy Commissioner (DC) to verify the accounts submitted by all the sub-committees. “We had planned to submit the scrutinised accounts on Nov. 1 but the DC (Dr. Bagadi Gautham) was transferred. The new DC has taken charge now and I have requested him to verify all individual accounts,” he said.