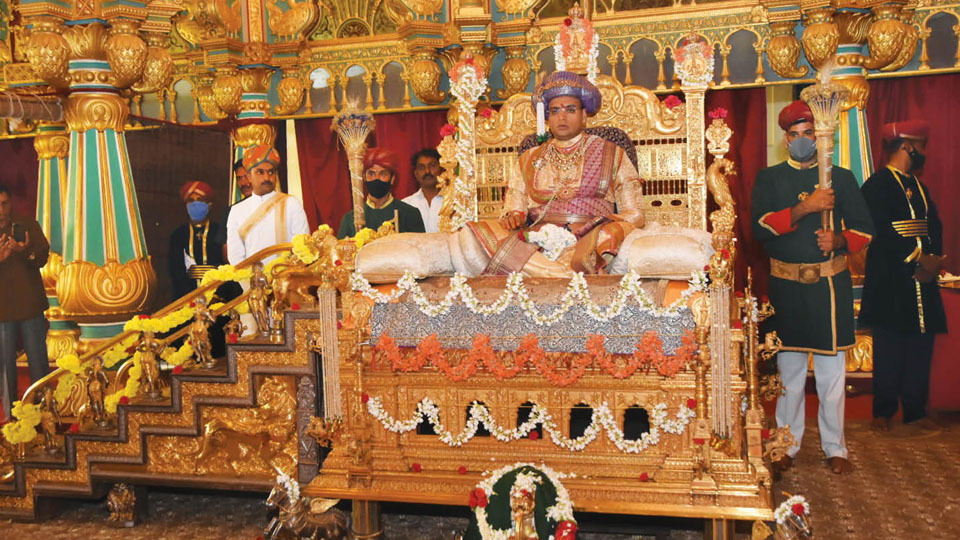 Mysore/Mysuru: Navarathri rituals kickstarted at Mysore Palace with the commencement of Khas Durbar or Private Durbar today during which titular head of Mysore Royal Family Yaduveer Krishnadatta Chamaraja Wadiyar ascended the Golden Throne at Durbar Hall between 12.15 pm and 12.25 pm.

Prior to this, rituals began at Durbar Hall and Private Residence early in the morning at 5.30 am with oil bath to Yaduveer. The Lion’s head to the Golden Throne was fixed between 6.15 am and 6.30 am.

It may be recalled that the Golden Throne (Simhasana) and Silver Throne (Bhadrasana) were assembled on Sept. 20.

As part of the rituals, kankana was tied to Yaduveer between 9.45 am and10.05 am at Chamundi Thotti. Later, kankana was also tied to Trishika Kumari Wadiyar at Vani Vilas Puja Hall at the Palace.

The rituals at the Palace continued with Pattada Aane (Royal elephant), Pattada Kudure (Royal horse), Pattada Hasu (Royal cow) and Pattada Onte (Royal camel) being brought to the Palace along with a group of married women (Sumangalis) carrying Kalashas from Kodi Someshwara Temple and Kodi Kalabhairaveshwara Temple at 10.45 am. Then they were taken to Savara Thotti where puja was performed to Yaduveer and Pattada Aane, Kudure, Hasu and Onte blessed him.

After seeking their blessings, Yaduveer arrived at the Durbar Hall and performed kalasa puja and puja to the Golden Throne before ascending it between 12.15 pm and 12.25 pm. While, Yaduveer walked through the Durbar Hall, the durbaris present chanted Bahu Parak to inform the Court about the arrival of the Maharaja.

Soon after Yaduveer ascended the throne, priests from 23 temples including Chamundeshwari Temple atop Chamundi Hill, Sri Ranganathaswamy Temple in Srirangapatna, Cheluvaraya-swamy Temple in Melukote, Nanjundeshwara Temple in Nanjangud and the temples inside the Palace like Ganapathy Temple, Kote Anjaneyaswamy Temple, Prasanna Krishna Temple, Trineshwara Temple, Bhuvaneshwari Temple, offered Prasada and Proksha (sprinkling of holy water on the head) to Yaduveer.

Later, Yaduveer and members present at the Durbar Hall stood in attention for the Mysore Anthem Kayo Sri Gowri played by the Police Band. They also played the compositions of Sri Jayachamaraja Wadiyar while Yaduveer conducted the private durbar which ended with Biju Utsava (bringing of Goddess Chamundeshwari idol from Chamundi Totti to Kannadi Totti) between 1.50 pm and 2.05 pm.

After, descending from the Throne, Yaduveer arrived at Savari Thotti were Trishika Kumari Wadiyar offered aarti and performed padapuja. While the rituals were being performed in the presence of Palace Priests Srihari and Shyam Dixit, both Pramoda Devi Wadiyar and Aadyaveer Narasimharaja Wadiyar, son of Yaduveer and Trishika Kumari, watched all the events sitting at the Durbar Hall.

The Khas Durbar will be held between 7 pm and 8.30 pm everyday till Oct. 3 at the Palace.

Meanwhile, entry to Palace was restricted to visitors all till 2 pm today.