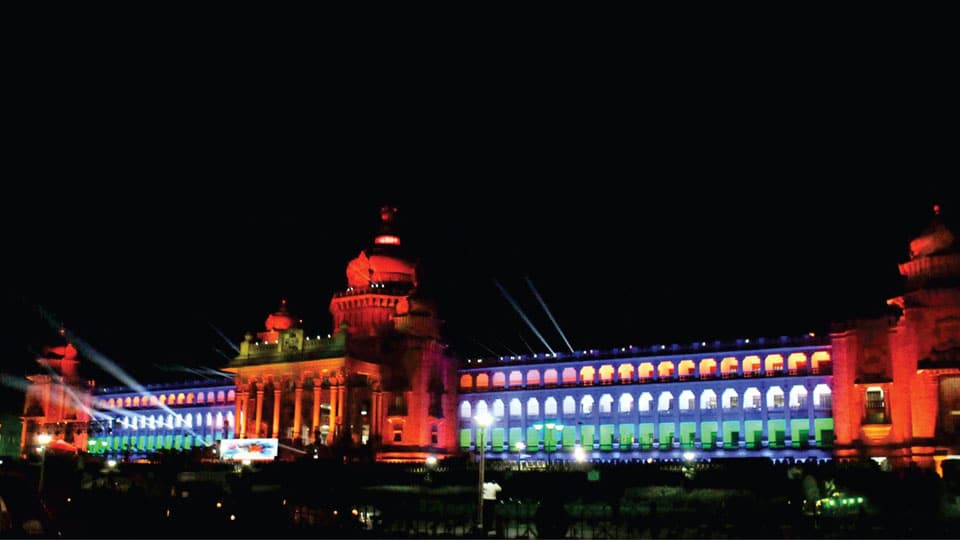 Russian query cause for change in Vidhana Soudha architecture style

Bengaluru: Vidhana Soudha, the iconic seat of the Karnataka Legislature, is celebrating its Diamond Jubilee today.

After the unification of Karnataka, Bangalore (now Bengaluru) became the centre of Karnataka and Kengal Hanumanthaiah felt that there needed to be a structure which could make the city the administrative capital of the State.

Kengal Hanumanthaiah, in the 1950s, had told a reporter the reason why he wanted to construct an imposing structure. “Do you know how I conceived the idea of this building? A Russian cultural delegation was visiting Bangalore and I took them around to show the city. Every now and then they queried, “Have you no architecture of your own? They are all European buildings.”

The structure was designed by B.R. Manickam in 1950. According to the Karnataka Legislative Assembly website, the project began on July 13, 1951 after the then Prime Minister Jawaharlal Nehru laid the foundation stone.

However, the actual construction began in 1952 and was completed in 1956. It took nearly 5,000 convicts and 1,500 skilled masons, chiselers, wood carvers and carpenters to construct the massive legislative seat comprising 172 rooms. The entire cost of construction was Rs. 1.84 crore.

Built in a Neo-Dravidian, Dravidian, Indo-Islamic and British styles of architecture, the Vidhana Soudha is spread over 60 acres and houses the Legislative Assembly and Council chambers, in addition to offices of the Chief Minister, prominent Ministers and senior government officers.

The majestic structure has been built largely with Bangalore granite, Magadi Pink and Turvekere Black Stones excavated from areas around Bengaluru.

“It was always meant to represent the people,” Suresh Moona, a historian who has documented Bengaluru’s past, said. He added that it was this sentiment that inspired the words “Government’s work is God’s work” etched in bold at the entrance of the building.

Over the years, many other historians have said that Vidhana Soudha was also a symbol representing democracy as against the monarchy that existed earlier.

The State has since constructed Vikasa Soudha (next to the Vidhana Soudha in Bengaluru) and the Suvarna Vidhana Soudha building in Belagavi district and some mini-Vidhana Soudhas in other districts to represent administrative seats of power.

“The grace and grandeur of the original Vidhana Soudha cannot be replicated,” Moona said of the first Legislature building which is now illuminated for the occasion.