Home » Feature Articles » Save Cauvery, save Kodagu and save ourselves – 1 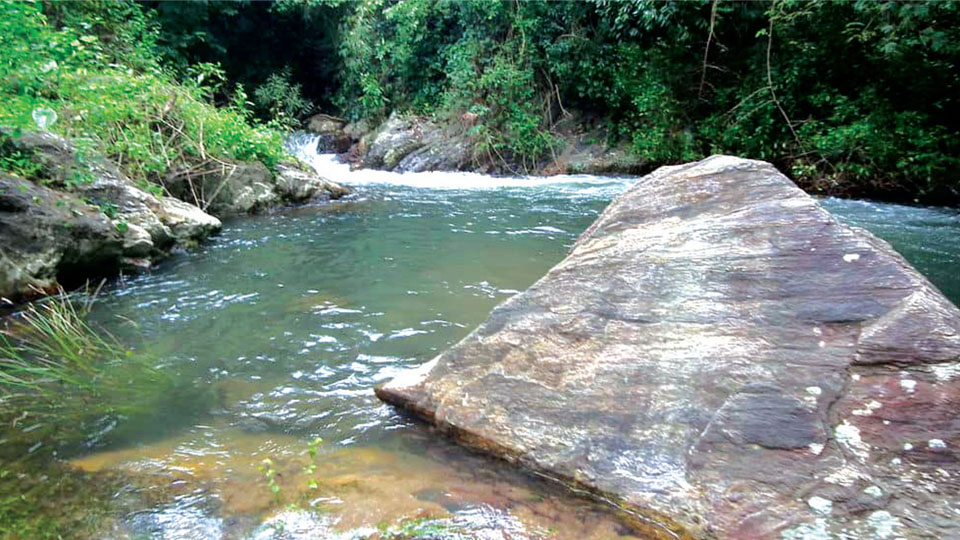 Save Cauvery, save Kodagu and save ourselves – 1

The environment of Kodagu is being destroyed at an alarming rate. With many destructive development projects planned, the landscape of Kodagu is being destroyed, endangering the indigenous communities. In this article, President of Coorg Wildlife Society Colonel (Retd.) C.P. Muthanna looks at three aspects: The importance of protecting Kodagu landscape and environment, the threats and the solution. —Ed

Kodagu landscape is dominated by forests, coffee estates, paddy fields, sacred groves, rivers and streams. It is inhabited by a number of local communities who are like animals in the forests and just as these animals they too will disappear if forests are destroyed. This is because these communities are very small in number and Kodagu is their only real home.

Importance of Kodagu to South India

Kodagu is the catchment for River Cauvery. Over 70% of the total inflow into KRS Dam is from Kodagu. The river is fed by numerous streams and rivulets that flow from the forests, coffee plantations and Paddy fields. Cauvery is the life-line of South India and provides food, water and economic security for the entire region. It provides water to 8 crore people and 600 major industries. Hence protection of Kodagu as the catchment of Cauvery is extremely critical.

Threats: It is a matter of deep concern that the Kodagu landscape is under serious threat due to a number of factors:

Urbanisation: Since the past ten years, about 2,800 acres of coffee plantations and paddy fields in Kodagu have been converted for commercial purposes. Towns in Kodagu are rapidly expanding and new layouts are coming up in between the towns. The layouts also expand and towns start to join each other and become larger towns.

We may soon have two large cities one in South Kodagu comprising Virajpet-Gonikoppal- Ponnampet and another in North Kodagu comprising Kushalnagar and surrounding areas. It is also of concern that in several cases, the layouts are formed without any conversion or approval. Much of the land conversion is due to greed.

READ ALSO  Monsoon to gain momentum in Kodagu after June 20

Land use in Kodagu must be regulated to provide housing facilities and infrastructure for the existing population and not to cater for the needs of thousands of people from outside the district to make Kodagu their home. In this regard it is indeed a shame for anyone to convert agriculture or plantation land to sell them as sites, layouts and resorts. If Kodagu itself is gradually converted to one big city, how will there be enough Cauvery water?

Tourism: For Kodagu, tourism has become a huge curse. Much of the degradation of the landscape is due to uncontrolled tourism. With a population of just about 5.5 lakhs, Kodagu received over 13 lakh tourists last year. Resorts consume huge amount of water. The district administration has restricted digging of borewells in Kodagu and also pumping of water from rivers. It should instead see that all resorts are closed down during summer months. Some of the plush resorts in Madikeri and Galibeedu get water from a borewell close to the Kootu Pole, Madikeri’s only water source, and poor residents have to pay for tankers to supply water to their houses during summer. Some resorts have also blocked the flow of water of natural streams.

Home stays: No more licenses should be issued for new home-stays. Even in the case of existing home-stays, the owners to try and keep their home-stays closed during peak summer months unless the income from the home-stay is absolutely essential to meet the expenses of the family. Tourism results in traffic jams, garbage, rising prices, water stress and land conversion for resorts etc. Influx of tourists also disturbs wildlife and increases elephant attacks.

400 KV high-tension power line: The Mysore-Kozhikode 400 KV power line resulted in the loss of over 54,000 trees in Kodagu. Other projects such as the Karike Hydro electric project have also resulted in loss of tree cover. Now several more thousands or lakhs of trees are to be felled for railway lines and national highways and for the Kongana river project. In many cases the projects are for the benefit of the neighbouring State of Kerala.

Railway lines: There are two railway lines proposed through Kodagu. One is in the North to connect Mysore-Kushalnagar and Makkandur near Madikeri. The second one is in the South to connect Wayanad in Kerala via Virajpet. Both these projects will spell disaster to Kodagu and must be stopped. Even if the railway line in the North is terminated at Kushalnagar, it will be like opening the door of the house. There will be huge influx of outside immigrants to Kodagu especially Bangladeshis claiming to be Assamese. Our MP Pratap Simha says that the rail link to Kushalnagar is to fulfil a long-standing demand of the people of Hunsur and Periyapatna. This is difficult to understand since people from Hunsur and Periyapatna can conveniently reach Kodagu by road.

National Highways: There are proposals to widen the existing roads in Kodagu to National Highways. The existing traffic density does not warrant such road widening and they only seem to be scams for money making and looting timber from Kodagu. The airport at Mattanur and defence-related traffic from Mangalore Port are given as the reasons but these do not seem to have any logic and are only to fool the people. Road widening will automatically increase traffic, push up land prices along the roads and will accelerate the pace of urbanisation. Certain towns such as Murnad may be totally destroyed.

Sand mining: Sand mining in Kodagu is rampant and there is a need to curb the movement from sand outside the district. The large-scale urbanisation in Kodagu is also a cause for large scale sand mining of Kodagu rivers. It is sad to see the plight of the Lakshmanatheertha River that has been totally destroyed by sand mining. The result is that locals who require sand for genuine purposes have to pay exorbitant prices for sand.