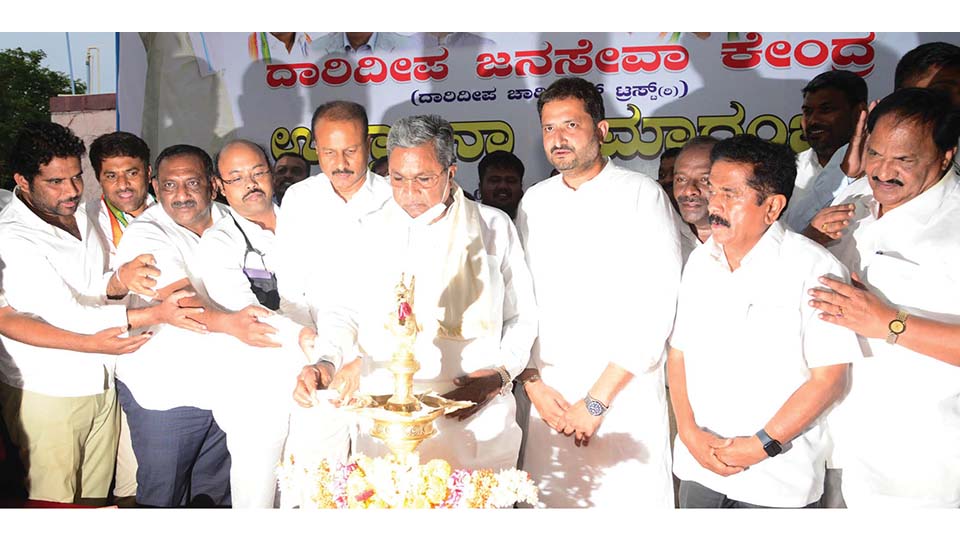 Mysuru: Opposition Leader and former Chief Minister Siddharamaiah has said that real politics is all about serving people, especially the poor and not enjoyment of power.

He was speaking after inaugurating ‘Daarideepa Janaseva Kendra,’ a Charitable Trust started by Krishnaraja constituency Congress leader and ex-Corporator M. Pradeep Kumar at Aravindanagar on Friday.

“Amassing wealth, enjoying power and making profit is not politics. Serving people sincerely is the real purpose of politics. It is common to see politicians serving the rich and this should stop. The rich with their money power can easily get their jobs done and officials readily oblige them in anticipation of monetary gains. But the poor have no money and officials neglect them. That’s why politicians and those who are in public life should help the poor and try to solve their problems,” he said.

“It is alright to have ambitions in politics but no one should be over-ambitious in politics,” he advised the upcoming politicians and added that Pradeep Kumar as a former Corporator served the people well and it is good to see him continuing his services.

“I am happy to inaugurate ‘Darideepa Janaseva Kendra’ and wish it will carry out its activities of helping the poor and the helpless,” he concluded.

Pradeep Kumar, who presented Siddharamaiah with a bust of Basavanna, said that since his childhood he is an ardent devotee of Basavanna and Siddharamaiah like Basavanna had sincerely worked for the welfare of all sections of the society during his tenure as the Chief Minister of the State.

Those who honestly serve people will achieve greater heights in politics. Politicians with other resources may become MLAs and Ministers but those who serve people sincerely like former Prime Minister H.D. Deve Gowda and former Chief Ministers, B.S. Yediyurappa and Siddharamaiah, will rise in politics and reach highest levels. One cannot gain power by force and it should come as a God’s gift. In a democracy, not everyone will gain power. I had served the people as a Corporator and as a continuation, I have started ‘Daarideepa Janaseva Kendra’ to give organised service to the people. Siddharamaiah has blessed me by inaugurating the centre. The centre intends to provide services related to Aadhaar, Ration card, widow pension and other pension schemes in addition to health and legal services.